The University of Maryland, Baltimore (UMB)’s Project SEARCH graduation ceremony featured a mix of revelry and reunion on June 3, with the Class of 2019 celebrating completion of the internship program and former students joining the festivities to share their success stories. 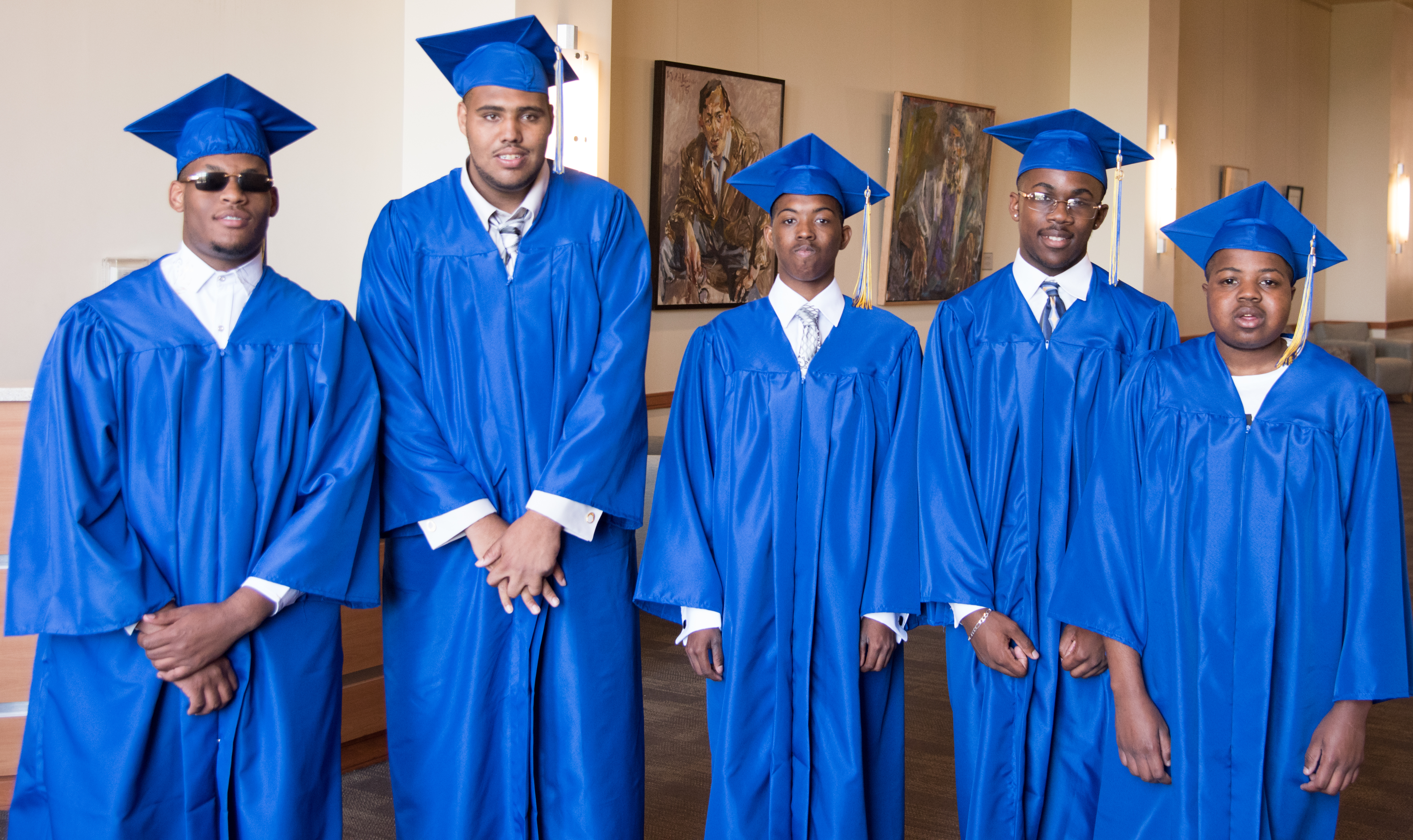 (View a photo gallery from the event.)

Two of the graduates earned full-time jobs and two acquired seasonal positions. Project SEARCH program manager Tameka Harry, her team, and the initiative’s partners continually strive to connect students with employers and social services as they transition into adulthood. Other program collaborators include The Arc Baltimore nonprofit, Baltimore City Public Schools, and the state’s Division of Rehabilitation Services.

“Project SEARCH is a unique program that’s very dear to my heart,” Harry told the crowd of 80-plus at the SMC Campus Center’s Elm Ballrooms. “It provides an opportunity to those shining stars that you see sitting among us. They are given a chance to show the world that they can make a difference. With specialized training, dedication, and patience, they can compete for employment.

To prove the point, three Project SEARCH alumni took the microphone and told their stories — Kevin Shaw (2010) and Mali Mussa (2013), who both work for UMB’s housekeeping department, and Anthony Courtney, who graduated last year and landed a custodial job at Woodbrook Early Education Center/Woodbrook Baptist Church in Towson.

“Project SEARCH helped me to become an independent adult. I live by myself and I have a part-time job, too,” Shaw said before flashing a thumbs-up and leaving the room. Why the early exit? He had to get back to his job. “I’m surprised Kevin came to do this, because he does not like to take off work!” Harry said with a smile.

Said Mussa, “Project SEARCH helped prepare me for the real world. It gave me training and skills such as how to conduct myself on the job. I also have job coaches to support me if I ever have an issue, and I am financially independent because of what I learned in the program.”

Courtney, who took a half-day off to attend the graduation, said he really enjoys his job and his co-workers, and he offered this message to the Class of 2019: “You can accomplish anything by working hard and having a great support team. Congratulations to all of you. This is the beginning of a new journey.”

Courtney’s mother, Cassandra Gross, was the next to speak, extolling the benefits of Project SEARCH and the impact it had on her son.

“To know that your child is being transitioned to adulthood and being independent is more than breathtaking,” she said as the graduates listened intently in their dark blue caps and gowns. “It’s scary to send your child to this big university in the city, but with the right guidance, Anthony pursued his goals and really pushed through. It has been awesome. I hope this program never ends.”

After the speeches, it was time to celebrate the graduates, who stepped up to the dais to discuss their work rotations and thank the program’s staff members and other supporters. Several of the graduates had acquired nicknames, adding levity to the proceedings.

“Larry was very reserved and quiet,” Buhr said. “He was a little scared of the process, but he has learned many aspects of the job while working in our department — properly washing pots and pans; stocking all of our food and products; placing the cookies and desserts; sweeping, mopping, and cleaning; and his newest job, serving customers on the hot food line.

“Larry impressed us so much, we hired him as a regular employee. Like a good citizen of Maryland, he is now earning money and paying taxes. And to all of Larry’s classmates, I have one piece of advice: Keep on learning. Your future has just begun.”

Darrius Patterson started a full-time position with Alban CAT heavy equipment company in January, and Derreck Vaughn, “The Class Comedian,” is doing seasonal work at the Orioles’ ballpark and will help people find their seats this fall at Ravens’ games. The other graduates were Eric Brown, Brianna Davis, and Brittany Thomas.

Harry thanked the program’s internship sites and business liaisons, then offered special acknowledgment to Mary Stemler, community outreach specialist for The Arc Baltimore, for her efforts to connect students to adult services. To cap it off, Harry asked the graduates to move their tassels from left to right.

“This is the best part of the ceremony, receiving your certificate of completion,” she told the students. “You guys worked hard, and I can say you deserve it.”

The graduates accepted their diplomas one by one, flashing smiles and thumbs-up to the applauding crowd as they processed to the back of the room, then took photos with friends and family who were beaming.

“What other word can you say but ‘proud’?” said Vaughn’s mother, Patty Branch. “Derreck loves to work, and they have encouraged him to work smarter. This is a beautiful program. Miss Tameka and Miss Stemler, they are right there with them. They are constantly calling and keeping me up to date with what Derreck is doing. I would recommend that any child who has any kind of problem, he or she should come here.”

Anthony Bazemore Sr. praised the program and its partners, as well, saying his son learned great lessons about how to interact with people and succeed in the workplace.

“Project SEARCH needs to carry on. It’s a brilliant program,” the father said. “Look at my son. His work ethic and his willingness to learn, it’s strong within him. And I would say that’s due to the program, because a lot of kids who aren’t in a program like this, their learning ability might fade somewhat. It keeps the kids looking forward to a better day.”