Leaders in nursing education from throughout Maryland gathered at the University of Maryland School of Nursing (UMSON) on May 22 for the 2017 Maryland Action Coalition (MDAC) summit.

The summit drew nearly 100 attendees from a variety of health professions, educational institutions, and health care entities. (See video below.)

The coalition strives to improve health care by implementing recommendations set forth in the landmark report, The Future of Nursing: Leading Change, Advancing Health, released in 2010 by the Institute of Medicine (IOM) and the Robert Wood Johnson Foundation. The report addressed the challenges facing the nursing profession, in particular the need to prepare the nursing workforce to meet the demands of providing excellent care to an increasingly diverse and aging population, within a rapidly changing health care system. MDAC was formed in 2010 shortly after the report’s release.

“Even though the report came out in 2010, you know we are still undergoing a transformation in this country,” said keynote speaker Susan Hassmiller, PhD, RN, FAAN, senior adviser for nursing for the Robert Wood Johnson Foundation, in her address “The Nurse’s Role in Building a Culture of Health.” 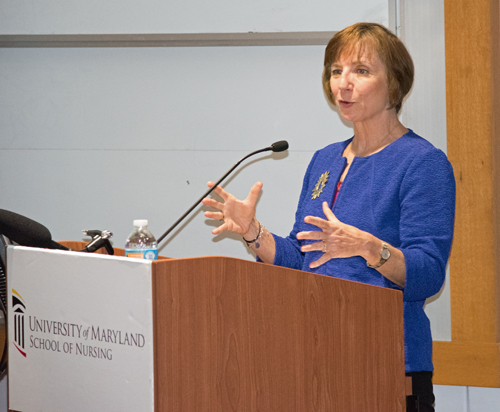 Susan Hassmiller, PhD, RN, FAAN, senior adviser for nursing for the Robert Wood Johnson Foundation, addresses the role nurses will play in building a culture of health in her keynote address at the Maryland Action Coalition's 2017 Retreat and Leadership Summit.

“If you don’t remember any of the details of my presentation today, I hope you will at least feel the importance that I am placing on nurses being part, leaders in this transformation. That is key and central,” said Hassmiller, who was the study director on the 2010 Future of Nursing report at a time when she said nurses lacked influence and representation on boards and committees.  A committee, led by former U.S. Secretary of Health and Human Services Donna Shalala, looked at best practices in health care and how nurses might be part of the transformation.

“This report is about the health of the nation,” Hassmiller said.  “As a means to an end, we think nurses are going to be really great leaders in helping to transform this country’s health and health care system.”

Among the report’s recommended goals was to increase the proportion of nurses with a baccalaureate degree from 50 to 80 percent by 2020, and to double the number of nurses with doctorate degrees by 2020.

“In the first time in the history of forever, we now have more baccalaureate nurses in this country than associate degree nurses,” she said. “That jump is enormous. Everyone has been working on these issues for a very long time, but it took the IOM to present a blueprint to bring it all together.”

Another recommendation was to increase opportunities for interprofessional education, something in which the state of Maryland has excelled, she said.

“Maryland has it going on. They really have activities going on in leadership, diversity, interprofessional, workforce development,” Hassmiller said, noting 40 people enroll in UMSON's Leadership Development Program each year.

The IOM report also recommended that nurses should reflect the population in terms of race, gender, and ethnicity. In terms of diversifying the workforce, “we are making progress,” Hassmiller said. “We are the health professional that is making the most progress with diversity. We still don’t look like the people we serve, so we have a lot of work to do.”

In Maryland, health disparities exist throughout the state, caused by gaps in services, Hassmiller said.

“In building a culture of health, I hope you will begin to see that we need to go way beyond the bounds of just medicine, nursing, social work, and pharmacy and dentistry,” she said. Business, housing, and recreation and parks all need to get involved, she said.

“We are continuing to do well in academic progression, and nurse residency progression and advanced practice registered nurses progression,” she said.

Kelly Connor, MSN, RN-BC coordinator for nursing practice at Johns Hopkins Hospital said she enjoyed the summit, which she attended in place of a co-worker who could not attend at the last minute. “The public health information was a true eye-opener,” she said. “I definitely want to come back next year.”