A group of UMB CURE Scholars was surrounded by history on July 14 at an awards ceremony held at Davidge Hall in which the youngsters were reminded they, too, are making history.

“This is where public medical education began in the United States,” Jay A. Perman, MD, president of the University of Maryland, Baltimore (UMB), told the 19 public school students who are part of a larger group of Scholars completing a summer program at UMB.

“So now you’re part of a long and important tradition,” Perman said, reinforcing the aim of the UMB CURE Scholars Program to create a pipeline for youngsters to future careers in medical research, health care, including dentistry, and science. UMB’s initiative is the nation’s pioneering program in beginning this pipeline as early as sixth grade. The Scholars who gathered at Davidge entered the CURE program last fall and will continue to participate as seventh-graders at Franklin Square Elementary and Middle School, Green Street Academy, and Southwest Baltimore Charter School. 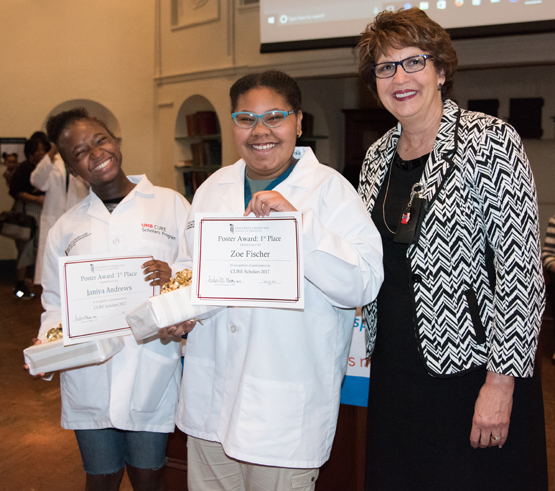 Part of the National Cancer Institute’s CURE (Continuing Umbrella of Research Experiences) initiative and supported by NCI’s Center to Reduce Cancer Health Disparities (CRCHD), UMB CURE launched in 2015. Due to its success kindling an interest in science with younger students, UMB CURE has become a national model that the center is encouraging others to adopt.

“People are looking at you — at what you’ve achieved already and how much you’ll go on to do, and they’re saying that they want a program like this one,” Perman said. “They want their young people to have opportunities like you do – like this camp, and all these people around you, guiding you, teaching you, cheering you on.”

The camp that he referred to was Planet Smilez Discovering Dentistry Camp, held July 10-14 at the University of Maryland School of Dentistry (UMSOD) under the direction of third-year dental student Kathryn Pawlak. She is founder of Planet Smilez, a nonprofit organization that promotes oral health education.

“Consider dentistry and oral health as a career choice,” Reynolds suggested, informing the youngsters of opportunities in community practice, research, and teaching. If any of the students choose to pursue dentistry, they would be members of the UMSOD Class of 2030. “That’s not too far off,” the dean said.

So that students could learn more about dentistry, the event included a tour of the Dr. Samuel D. Harris National Museum of Dentistry.

The poster competition focused on public health topics such as harmful effects of smoking, and winners were honored at the ceremony. They are Zoe Fisher and Janiya Andrews, first place; Ke’Ron Jones and Ziara Peebles, second place; and Kai-yonna Hughes and Hali Smith, third place.

One of the prize winners, Ziara Peebles, said that she and her collaborator were inspired by a UMSOD faculty member whom she hopes to emulate. After participating in a presentation about oral cancer by Donita Dyalram. DDS, MD, clinical assistant professor in the Department of Oral and Maxillofacial Surgery, Ziara decided she wants to be an oral surgeon.

At the end of class on July 13, the girl asked her new role model for two favors: to pose for a photo together and to consider her request for a future tour of the operating room.

At the ceremony, Pawlak encouraged all of the rising seventh-graders to dream big. “Work hard so you can accomplish your dreams,” she said.

Meanwhile, the rising eighth-graders were finishing off their own stretch of hard work during a three-week session that also began June 26 and ended July 14. The group went to NASA Goddard Space Flight Center, where they learned about satellites and visited the world’s largest “clean room,” and traveled to Sparks, Md., to BD, also known as Becton, Dickinson and Co., where they viewed virtual reality equipment and engaged in an engineering project. They traveled to the National Institutes of Health on June 27 to help CRCHD celebrate 21 years of CURE.

On campus, they studied proteins and DNA at the University of Maryland School of Pharmacy (UMSOP) in laboratory activities directed by Lisa Jones, PhD, assistant professor in the Department of Pharmaceutical Sciences at UMSOP.  Their feat of extracting DNA from fruit was captured by WJZ-TV, whose anchor Denise Koch filed a July 11 report, “UMB’s CURE Scholars Program Helps Inner City Kids Get Interested in Science.”

CURE Executive Director Robin Saunders, EdD, MS, told Koch that some of the children entered the program saying they wanted to be an NFL player but now are saying, “I want to be a pediatrician.”

The seventh-graders spent a week at the University of Maryland BioPark, learning about genomics under the guidance of Michelle D. Giglio, PhD, associate professor in the University of Maryland School of Medicine’s Institute for Genome Sciences. At the UMB Community Engagement Center’s Pop Farm, they tried their hands at urban gardening with the assistance of William Joyner, MSW, coordinator of community engagement.

The University of Maryland School of Nursing lent support by providing rooms for breakfast and lunch throughout the summer activities.

The CURE Scholars Program will resume in the fall after the selection of the third cohort of youngsters, who will be sixth graders at the three participating Baltimore City Public Schools.