Athletes and family members who had accompanied them to the Maryland Special Olympics were greeted warmly by a large group of volunteers from the University of Maryland School of Dentistry (UMSOD). And for some competitors, the willingness to avail themselves of oral health services was a positive, repeat performance.

It was the 22nd time the UMSOD held its Special Smiles clinic at the state athletic competition for special needs athletes. Conducted June 10, the clinic was a key part of an array of healthy options offered at Towson University, one of several venues for the 2017 Summer Games.

During the 2017 Special Smiles clinic, 46 UMSOD volunteers served 101 athletes, some of whom had come to be screened in previous years. Kai Mosby, 45, who began competing as a teenager, added an oral checkup to his Special Olympics routine when the clinic was established in 1996. Although he receives dental care during the course of the year, Mosby is fond of his annual opportunity to be cared for by UMSOD volunteers, said his mother, Tami Byrd. 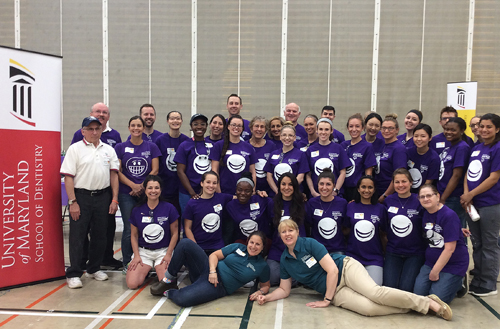 Mosby and his mom were not the only ones present who participated in the original Special Smiles clinic. Its founder, Mark Wagner, DMD, a professor emeritus who now serves on the Dean’s Faculty at UMSOD, said it began as an oral health screening program held in a white tent.

Special Smiles has since expanded to include fluoride varnish applications, making athletic mouth protectors, and distributing oral health care bags. These services are essential for individuals with special needs, who experience an increased risk of ailments and who face several obstacles to oral care. In addition, many dental professionals are not trained or equipped to care for these patients.

“There is a lot of dental neglect among patients with special needs. It is often an access-to-care issue,” said associate professor Sheryl Syme, RDH, MS, who along with clinical instructor Leila Liberman, RDH, MDE, has been organizing the Special Smiles clinic for a decade (since 2007) and participating twice that long.

For students, the clinic demonstrates “the value of paying it forward,” said Liberman. “I hope that stays with them throughout their careers.”

Special Smiles depends on its volunteers as does Special Olympics Maryland. From June 9 to June 11, more than 1,300 athletes competed at the 47th Summer Games in bocce, cheerleading, softball, swimming, and track and field. Adding to the sweep of it all was the fact that sports were contested at multiple venues. It took a volunteer corps of at least 850 Marylanders, according to the organization.

“Dental students working with people with intellectual disabilities  through this partnership often diminishes fear and trepidation,” said Carol Whiting, director of health programming for Special Olympics Maryland. She noted that Special Smiles “continues to be the most well-attended discipline of the seven offered each year at Healthy Athletes.”

CareFirst BlueCross BlueShield provided support for the Healthy Athletes services, which ranged from eye care to gait evaluation by volunteers with the University of Maryland School of Medicine’s Department of Physical Therapy and Rehabilitation Science.

Of the athletes served, 17 got mouth guards for their protection during contact sports, 91 received preventive topical fluoride varnish applications, and all were ushered through a series of screenings to detect problems such as caries, gingivitis, or oral lesions.

At each step of the process, the athletes submitted to scrutiny while taking the opportunity to show off any medals and enjoy the camaraderie. Competitors welcomed their new toothbrushes and students’ friendly tips on how to best use them. Students used tooth models to teach proper oral hygiene techniques.

A first-timer was Mason Yeary, 17, who was preparing for 50-meter and 100-meter races and the miniature javelin throw. His parents said the cheerful volunteers at Special Smiles were creating that sense of “a community for him to be a part of” that the family had been looking for when they traveled from their home in Williamsport for the Summer Games.

Wagner, who went on from UMSOD to become global director of health and research initiatives at Special Olympics International, says this type of oral care all began with a dentist in Boston. He had provided personal care to Rosemary Kennedy, sister of President John F. Kennedy and of Eunice Kennedy Shriver, a founder of Special Olympics. Such services grew to be delivered worldwide and to include data collection.

“This population is living to become geriatric patients,” notes Wagner, a former associate dean of academic affairs and professor of pediatric dentistry at UMSOD who subsequently retired from Special Olympics.

At UMSOD, students are given experience treating people with intellectual disabilities through rotations in the school’s Special Care and Geriatrics Clinic, whose director, Janet Yellowitz, DMD, MPH, associate professor in the Department of Oral Surgery, was among the Special Smiles volunteers.

Altogether there were 11 UMSOD faculty members, including the longest-running volunteer, clinical assistant professor Mark Brennan, DDS, MS, who served as lead dentist for the ninth consecutive year. Lead dental hygienists and faculty members Sharon Varlotta, RDH, MS, and Cynthia Finfrock, RDH, who is also a staff member at UMSOD Faculty Practice, were joined by two alumni who are registered dental hygienists. Rhonnie Bullock, staff member at UMSOD Faculty Practice, was lead registrar, checking in athletes who might be old hands or newcomers to the Special Smiles clinic.