Researchers investigating a novel device to repair the mitral heart valve report 100 percent procedural success in a safety and performance study, the first such study done in humans. The image-guided device, based on technology developed at the University of Maryland School of Medicine, is deployed through a tiny opening in a beating heart, avoids open-heart surgery, automates a key part of the valve repair process, simplifies the procedure, and reduces operating room time. The research is published in the journal Circulation.

Traditional mitral valve repair is performed during open heart surgery, a lengthy operation in which the patient’s chest is opened, the heart is stopped and circulation is maintained with a heart-lung bypass machine. Recovery can take months, and patients face significant risks. As a result, there is considerable interest in finding less invasive mitral valve treatment options.

“We think this is a safer approach than open heart surgery,” says principal investigator James S. Gammie, MD, professor and chief of cardiac surgery at the University of Maryland School of Medicine. “We think the safety profile is going to be better and, ultimately, people will be able to go home from the hospital the next day.”

The device, known as the Harpoon TSD-5, made by Harpoon Medical Inc. of Baltimore, is an investigational device. At the present time, the U.S. Food and Drug Administration has not approved the device for use in patients in the United States. It is designed to treat degenerative mitral regurgitation (MR), the most common type of heart valve disorder. In MR, a leaky valve lets blood travel in the wrong direction on the left side of the heart, causing shortness of breath, fluid retention, irregular heartbeats and fatigue. MR develops when the small fibrous cords that open and close the valve’s flaps, known as leaflets, are broken or stretched, preventing them from closing tightly and causing the leaflets to bulge or prolapse upward toward the left atrium. The natural cords connect the valve flaps to muscles inside the heart that contract to close the mitral valve, which gets its name because its two flaps resemble a bishop’s mitre. 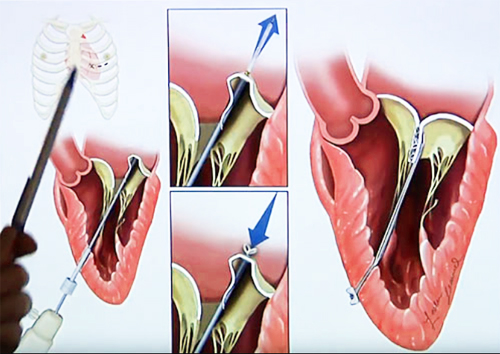 The TSD-5 anchors artificial cords on the flaps to take the place of the natural cords. The artificial cords are made of expanded polytetrafluoroethylene (ePTFE), a polymer commonly used as sutures in cardiac surgery.

Surgeons insert the device into the beating heart through a tiny opening in the rib cage and, using echocardiographic imaging, guide it to the surface of the defective mitral flaps. When the surgeon determines the optimal placement for an artificial cord, the device is actuated and a specially designed needle wrapped with 50 coils of ePTFE makes a tiny hole and sends the cord material through the flap. An automated process makes a knot to hold the cord in place. The other end of the cord is adjusted for optimum length and tied to the outside layer of the heart, the epicardium. Three or four cords are required for most cases.

Gammie says the ability to make adjustments to the artificial cords while the heart is beating is a key advantage over open heart surgery: “The heart’s fully loaded and beating and we can just adjust the length of the cords to optimize the result, and only when we’re really happy do we tie it off.”

Patients with severe degenerative MR resulting from isolated posterior leaflet prolapse were enrolled. Patients were selected if there was adequate leaflet surface to result in effective MR reduction. The primary outcome was procedural success, defined as successful implantation of one or more ePTFE artificial cords on the mitral valve, as well as a reduction in MR from severe to less than or equal to moderate at the conclusion of the procedure and at 30 days.

The study focused on an initial 11 patients at two clinical centers in Poland. Surgeons used the device to successfully implant multiple artificial cords and effectively reduce MR in all patients. The investigators say results were stable at 30 days and the procedure was safe.

Mitral valve regurgitation affects an estimated 2 percent of the population in the United States, or nearly 8 million people. “We think this approach is applicable to probably three-quarters of patients with degenerative disease, which is the No. 1 reason why people come to the operating room for surgery for mitral valve regurgitation,” says Gammie.

DISCLOSURE: The study was funded by Harpoon Medical, Inc. Dr. Gammie and three others on the research team report ownership of stock and/or options to purchase stock in Harpoon Medical. Another member of the study team, Mehrdad Ghoreishi, MD, is a co-inventor of the technology, which has been licensed from the University of Maryland by Harpoon Medical. At the present time, the U.S. Food and Drug Administration has not approved the Harpoon TSD-5 for patients in the United States.