This organ transplant demonstrated for the first time that a genetically modified animal heart can function like a human heart without immediate rejection by the body. The patient, David Bennett, a Maryland resident, is being carefully monitored over the next days and weeks to determine whether the transplant provides lifesaving benefits. He had been deemed ineligible for a conventional heart transplant at UMMC as well as at several other leading transplant centers that reviewed his medical records. 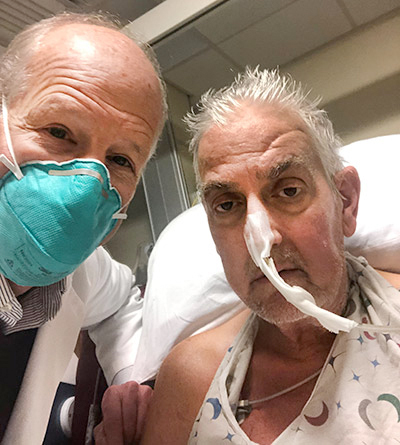 “It was either die or do this transplant. I want to live. I know it’s a shot in the dark, but it’s my last choice,” said Bennett, the patient, a day before the surgery was conducted. He had been hospitalized and bedridden for the past few months. “I look forward to getting out of bed after I recover.”

The U.S. Food and Drug Administration (FDA) granted emergency authorization for the surgery on New Year’s Eve through its expanded access (compassionate use) provision. It is used when an experimental medical product, in this case the genetically modified pig’s heart, is the only option available for a patient faced with a serious or life-threatening medical condition. The authorization to proceed was granted in the hope of saving the patient’s life.

“This was a breakthrough surgery and brings us one step closer to solving the organ shortage crisis. There are simply not enough donor human hearts available to meet the long list of potential recipients,” said Bartley P. Griffith, MD, who surgically transplanted the pig heart into the patient. Griffith is the Thomas E. and Alice Marie Hales Distinguished Professor in Transplant Surgery at UMSOM. “We are proceeding cautiously, but we are also optimistic that this first-in-the-world surgery will provide an important new option for patients in the future.”

Considered one of the world’s foremost experts on transplanting animal organs, known as xenotransplantation, Muhammad M. Mohiuddin, MD, professor of surgery at UMSOM, joined the UMSOM faculty five years ago and established the Cardiac Xenotransplantation Program with Griffith. Mohiuddin serves as the program’s scientific/program director and Griffith as its clinical director.

“This is the culmination of years of highly complicated research to hone this technique in animals with survival times that have reached beyond nine months. The FDA used our data and data on the experimental pig to authorize the transplant in an end-stage heart disease patient who had no other treatment options,” said Mohiuddin. “The successful procedure provided valuable information to help the medical community improve this potentially lifesaving method in future patients.”

About 110,000 Americans are currently waiting for an organ transplant, and more than 6,000 patients die each year before getting one, according to the federal government’s organdonor.gov. Xenotransplantation could potentially save thousands of lives but does carry a unique set of risks, including the possibility of triggering a dangerous immune response. These responses can trigger an immediate rejection of the organ with a potentially deadly outcome to the patient.

Xenotransplants were first tried in the 1980s, but were largely abandoned after the famous case of Stephanie Fae Beauclair (known as Baby Fae) at Loma Linda University in California. The infant, born with a fatal heart condition, received a baboon heart transplant and died within a month of the procedure due to the immune system’s rejection of the foreign heart. However, for many years, pig heart valves have been used successfully for replacing valves in humans. 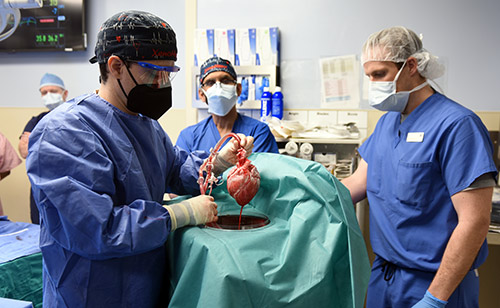 Before consenting to receive the transplant, Bennett, the patient, was fully informed of the procedure’s risks, and that the procedure was experimental with unknown risks and benefits. He had been admitted to the hospital more than six weeks earlier with life-threatening arrythmia and was connected to a heart-lung bypass machine, called extracorporeal membrane oxygenation (ECMO), to remain alive. In addition to not qualifying to be on the transplant list, he was also deemed ineligible for an artificial heart pump due to his arrhythmia.

Revivicor, a regenerative medicine company based in Blacksburg, Va., provided the genetically modified pig to the xenotransplantation laboratory at UMSOM. On the morning of the transplant surgery, the surgical team, led by Griffith and Mohiuddin, removed the pig’s heart and placed it in the XVIVO Heart Box perfusion device, a machine that keeps the heart preserved until surgery.

The physician-scientists also used a new drug along with conventional anti-rejection drugs, which are designed to suppress the immune system and prevent the body from rejecting the foreign organ. The new drug used is an experimental compound made by Kiniksa Pharmaceuticals.

“This unprecedented and historic procedure highlights the importance of translational research which lays the groundwork for patients to benefit in the future. It is the culmination of our longstanding commitment to discovery and innovation in our xenotransplantation program,” said E. Albert Reece, MD, PhD, MBA, executive vice president for medical affairs, University of Maryland, Baltimore (UMB), and the John Z. and Akiko K. Bowers Distinguished Professor and dean, UMSOM. "Our transplant surgeon-scientists are among the most talented in the country, and are helping to bring the promise of xenotransplantation to fruition. We hope it will one day become a standard of care for patients in need of organ transplants. As has happened throughout our history, the University of Maryland School of Medicine continues to address the most complex medical and scientific problems.”

Bruce E. Jarrell, MD, FACS, UMB president, who himself is a transplant surgeon, recalled: “Dr. Griffith and I began as organ transplant surgeons when it was in its infancy. Back then, it was the dream of every transplant surgeon, myself included, to achieve xenotransplantation and it is now personally gratifying to me to see this long-sought goal clearly in view. It is a spectacular achievement.”

“This is truly a historic, monumental step forward. While we have long been at the forefront of research driving progress toward the promise of xenotransplantation as a viable solution to the organ crisis, many believed this breakthrough would be well into the future,” said Bert W. O’Malley, MD, president and CEO, UMMC. “I couldn’t be more proud to say the future is now. Our skilled team of UMMC and UMSOM physician-scientists will continue to advance and adapt medical discovery for patient care that could offer a lifeline for more patients in dire need.”

Three genes — responsible for rapid antibody-mediated rejection of pig organs by humans — were “knocked out” in the donor pig. Six human genes responsible for immune acceptance of the pig heart were inserted into the genome. Lastly, one additional gene in the pig was knocked out to prevent excessive growth of the pig heart tissue, which totaled 10 unique gene edits made in the donor pig.

“We are thrilled to support the world-class team of transplant surgeons led by Dr. Griffith and Dr. Mohiuddin at the University of Maryland School of Medicine,” said David Ayares, PhD, chief scientific officer of Revivicor, Inc. “This transplant is groundbreaking, and is another step in the investigation of xeno organs for human use.”

Mohiuddin, Griffith, and their research team spent the past five years perfecting the surgical technique for transplantation of pig hearts into non-human primates. Mohiuddin’s xenotransplant research experience spans over 30 years during which time he demonstrated in peer-reviewed research that genetically modified pig’s hearts can function when placed in the abdomen for as long as three years. Success was dependent on the right combination of genetic modifications to the experimental donor pig UHeart™ and anti-rejection drugs, including some experimental compounds.

“As a cardiothoracic surgeon who does lung transplants, this is an amazing moment in the history of our field. Decades of research here at Maryland and elsewhere have gone into this achievement. This has the potential to revolutionize the field of transplantation by eventually eliminating the organ shortage crisis,” said Christine Lau, MD, MBA, the Dr. Robert W. Buxton Professor and chair of the Department of Surgery at UMSOM and surgeon-in-chief at UMMC. “This is a continuation of steps to making xenotransplantation a lifesaving reality for patients in need.”

Daniel G. Maluf, MD, FAST, professor of surgery and medicine at UMSOM and director, UMSOM’s Program in Transplantation, added: “This is a breakthrough for the field of organ transplantation and medicine. This event is the final achievement of years of research and testing from our multidisciplinary team led by Dr. Griffith and Dr. Mohiuddin and represents a beginning of a new era in the field of organ transplantation medicine. I am proud of our team’s incredible achievement.”

Peter Rock, MD, MBA, the Dr. Martin Helrich Chair and professor in the Department of Anesthesiology at UMSOM, said: “We carefully considered the unique needs of this patient in preparing him for surgery and the intricacies involved in modifying our anesthetic techniques for this xenotransplant procedure. Our planning paid off, and the surgery could not have gone better thanks to the herculean efforts of the medical team involved in this landmark event.”

About the University of Maryland School of Medicine

Now in its third century, the University of Maryland School of Medicine was chartered in 1807 as the first public medical school in the United States. It continues today as one of the fastest-growing, top-tier biomedical research enterprises in the world — with 46 academic departments, centers, institutes, and programs, and a faculty of more than 3,000 physicians, scientists, and allied health professionals, including members of the National Academy of Medicine and the National Academy of Sciences, and a distinguished two-time winner of the Albert E. Lasker Award in Medical Research. With an operating budget of more than $1.2 billion, the School of Medicine works closely in partnership with the University of Maryland Medical Center and Medical System to provide research-intensive, academic and clinically based care for nearly 2 million patients each year. The School of Medicine has nearly $600 million in extramural funding, with most of its academic departments highly ranked among all medical schools in the nation in research funding. As one of the seven professional schools that make up the University of Maryland, Baltimore campus, the School of Medicine has a total population of nearly 9,000 faculty and staff, including 2,500 students, trainees, residents, and fellows. The combined School of Medicine and Medical System (“University of Maryland Medicine”) has an annual budget of over $6 billion and an economic impact of nearly $20 billion on the state and local community. The School of Medicine, which ranks as the 8th highest among public medical schools in research productivity (according to the Association of American Medical Colleges profile) is an innovator in translational medicine, with 606 active patents and 52 start-up companies. In the latest U.S. News & World Report ranking of the Best Medical Schools, published in 2021, the UM School of Medicine is ranked No. 9 among the 92 public medical schools in the U.S., and in the top 15 percent (No. 27) of all 192 public and private U.S. medical schools. The School of Medicine works locally, nationally, and globally, with research and treatment facilities in 36 countries around the world. Visit medschool.umaryland.edu.