Crime at the University of Maryland, Baltimore (UMB) was down 10 percent in 2016. In addition to the drop from 109 incidents in 2015 to 98 in 2016, there were even greater decreases in violent crimes such as aggravated assault and robbery.

Antonio Williams, MS, police chief of the UMB Police Force and associate vice president of public safety at UMB, was pleased with the year-end statistics and sees the robbery rate as especially encouraging.

“I would say two robberies are two too many,” he said, “but when you go back to 2014 when we had 12 robberies on campus that’s a huge difference. Particularly when you look at what’s going on around us. The city again had over 300 murders. Robberies were up in the whole city and yet we’re seeing decreases here so I think that’s very commendable.”

The only categories with increases in 2016 were simple assault and stolen auto, with one additional incident each. 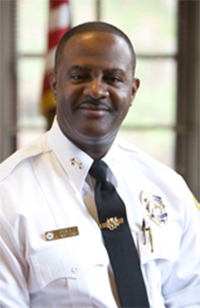 2016 was a challenging year for the UMB Police Force, Williams said, noting an increased demand for services. There were more special events and new facilities coming on board like the Maryland Proton Treatment Center, the UMB Community Engagement Center, and various clinics and offices. Even some activity beyond the campus boundaries brought a response from Williams’ police and security team.

“There were a number of student groups who held demonstrations and protest-type activities in 2016,” Williams recalled. “When some of those events were held off-campus, we can’t necessarily go back and forth with the students, but we can make provisions and work logistically to make sure they are covered security-wise. We do everything we can to keep our people safe.”

Thefts are a major part of any college/university crime report and 2016 was no exception at UMB. There were 73 thefts at UMB in 2016 after 80 in 2015. Members of the UMB community acting as “the eyes and the ears” for the police can help bring those numbers down, says Williams, whose force will spread the message with more “Coffee with a Cop” events at UMB in 2017.

In addition to the human touch, increased technology will help the UMB Police Force in 2017. A new police communications center is opening in the site of the old UMB bookstore at 222 N. Pine St. It will provide more space, a more efficient phone system, bigger and better monitors that operate in quadrants, providing four times the information, and upgraded equipment to help the dispatchers multi-task.

Also in that building is a new emergency operations center, which offers direct camera feeds from all over the campus, satellite TV for breaking news events, breakout space for training and simulations, and even a kitchen for emergencies when staff has to stay on duty.

Williams also is excited about a new portal on the UMB public safety website that will go live in January. Users can pick out a time frame (say Sept. 1 to Sept. 15), click a button and the screen will populate with all the UMB crime data from that period. Want more detail? Click on each icon on the map for specifics.

“It has taken a while to get to the point where we can make this available to our community,” Williams said. “We wanted it to provide specific, meaningful information. With the portal, users can visualize if there are problems in a specific area, or during a specific time period.”

The chief shares the success in 2016 with an “active UMB community,” pointing out how employees’ swift reactions led to several arrests. And while he looks forward to extending such partnerships in 2017, tackling the challenges associated with the Carter Center and Lexington Market demolitions, and reviving some marketing strategies such as “don’t talk, walk and text,” the chief didn’t want to leave 2016 without commending his public safety team.

“I’m absolutely proud of these men and women, both police and security,” Williams said. “They’ve taken on the job, they’re motivated, they recognize the importance of what they do, and their efforts have had a huge impact. They also see themselves as part of the community and that they serve as ambassadors to the University. They’re out there, they’re talking to people, they’re helping send a positive message about the University and the community.”