“Of all the forms of inequality, injustice in health is the most shocking and most inhumane.” 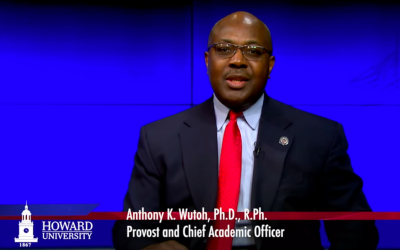 “White America needs to understand that it is poisoned to its soul by racism.”

Amid a global pandemic and a reckoning on racial injustice, those words from the Rev. Dr. Martin Luther King Jr. could just as easily have been spoken now rather than over 50 years ago, Anthony K. Wutoh, PhD ’96, BSP ’90, RPh, said in addressing the University of Maryland, Baltimore’s (UMB) Dr. King and Black History Month celebration.

Wutoh, Howard University’s provost and chief academic officer, illustrated his point while discussing COVID-19’s impact on communities of color, which he called “alarming” because of the disproportionate number of deaths they have suffered. He added that communities of color also were least prepared for the widespread effects of the pandemic, such as lockdowns and virtual schooling.

“The COVID-19 pandemic highlighted the impact of the various societal and racial disparities in health care, economic status, housing, and access to resources that Dr. King spoke against, protested, was jailed for, and ultimately was assassinated addressing,” Wutoh said during his keynote address, given via taped videoconference Feb. 4.

He said that Dr. King’s speech in which he discussed inequality of health and human rights rings just “as true in 2021 as in 1966.”

In addressing systemic racism in the United States, Wutoh talked about the deaths of Breonna Taylor and George Floyd in 2020 at the hands of police officers and the widespread protests that resulted.

“This spark, which finally seemed to awaken the sleeping conscience of white America, was reminiscent of the videos of dogs being unleashed on peaceful protesters during the civil rights era, police brandishing and using clubs and other weapons on men, women, and children asking to be treated equally under the law, and fire hoses and other instruments of violence thrusting innocent people against the walls and into the ground, helpless to defend themselves,” he said.

“It seemed that as we were managing through one global pandemic, the reckoning of systemic racism forced Americans to ask what kind of country it is that we live in if this is the way that other Americans are being mistreated, abused, and killed while we silently ignore their plight.”

He quoted Dr. King’s address to social scientists in 1967: “The policymakers of white society have caused the darkness. They create discrimination. They structured slums, and they perpetuate unemployment, ignorance, and poverty.”

“One could read the text of the speech and almost forget that this was not written in 2020,” he said.

Wutoh drew parallels between the double pandemics of today and Dr. King’s visit to Ghana during its independence ceremonies in 1957. Wutoh, who emigrated with his family from Ghana to Maryland’s Eastern Shore when he was a child, said Dr. King’s visit showed his global impact.

“Dr. King’s voyage was symbolic of a growing international alliance of oppressed people and his goal to broaden the scope of the civil rights efforts beyond the American South,” Wutoh said. “Dr. King certainly identified with the struggles of the newly independent Ghanaians and noted a significant parallel between the resistance against colonialism and the struggles to overcome racism in the United States.”

Wutoh said that Dr. King cried for joy as he saw the jubilation of hundreds of thousands of Ghanaians.

has been inspired by and felt a connection to the speakers the University has hosted at the Dr. King event over the years.

“They have given me a chance to listen and to learn about the issues to make sure I am more informed and able to take better actions,” he said. “There is so much work yet to be done. Our celebration of Dr. King serves as our call to action — a challenge to get to work.”

The event concluded with a reading of the late U.S. Rep. John Lewis’ essay, “Together, You Can Redeem the Soul of Our Nation,” by Russell A. McClain, JD, professor, University of Maryland Francis King Carey School of Law.

Inspiration from the Next Generation

After the event, Wutoh joined the CURE Scholars via Zoom for a question-and-answer session. He told the scholars he was impressed with their research posters and thrilled to see so many young, Black students interested in pursuing careers in science, technology, engineering, and math.

The scholars had many questions for Wutoh about his career, his education, and his values. They also asked if he had ever experienced racism and how he dealt with it.

“Unfortunately, we live in a world where people are not as respectful to Black individuals and people of color,” he said. “This country is getting better at dealing with racism and making sure that people are treated fairly and with respect, but we still have a way to go; however, I feel very encouraged by your generation because you have the confidence and capabilities to speak up for what’s right.”

In his keynote address, Wutoh also emphasized that while the country has come a long way, it still has much work to do. He called on UMB “to further Dr. King’s vision.”

“UMB uniquely holds the intellectual capital to help research, advise, and implement the change necessary to move our society forward,” he said. “We also bear the responsibility of educating the next generation of leaders in a manner that equips them to value diversity, not only in race and ethnicity, but also diversity of thought, diversity of experience, and diversity of culture in a way that will not only honor Dr. King’s legacy, but also improve the conditions of Americans and the global community going forward.”