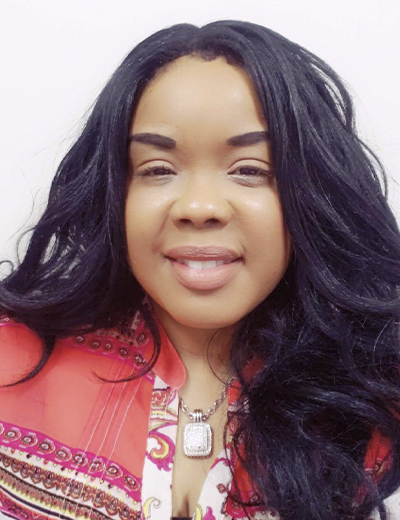 Mishawn Smith is a change agent.

Smith has started the Booked for Lunch Club where members read and discuss diversity, equity, and inclusion (DEI) books; founded the University’s first faculty and staff LGBTQ+ affinity group, Stonewall Pride; worked with the UMB Police Department (UMBPD) on safety issues; and mentored with groups such as Pathways in Technology Early College High School, just to name a few initiatives in which she has played a large part.

For her efforts, she received UMSON’s Dean Jane M. Kirschling Leadership Award in 2019. Last year, she received the University System of Maryland (USM) Board of Regents Staff Award for Inclusion, Multiculturalism, and Social Justice for her devotion to making UMB a better, safer, and more inclusive place.

And now she has added another honor for her DEI work: a 2021 UMB Rev. Dr. Martin Luther King Jr. Diversity Recognition Award.

“Following Dr. King’s legacy, Smith has used the power of her actions and voice to bring about change and challenge individuals to address systemic issues related to criminalization of poverty, reducing racial disparities within our justice system, racism, marginalization, women and youth empowerment, homophobia, and transphobia,” said Enjoli Sonnier, MBA, MS, assistant director of events, Office of Communications, UMSON. “Her continued work within this area has had a ripple effect and aided the campus in creating new initiatives.”

Smith said her philosophy is “to meet people where they are.”

“I care about people and equality. There is so much room for change and to better communities and ourselves,” said Smith, who grew up in West Baltimore. “When I would hear about the work of Dr. King and other pioneers like him, I knew I wanted the same. I have seen a lot throughout the years, and I knew that I wanted to make a difference in any way I could. I just jump in and do what I can. I always meet people where they are. I do not tell their story for them. I listen and ask, ‘How I can be of service to you?’ ”

Smith’s work to create a safer environment for marginalized populations led to the designation of the UMSON gender-neutral bathrooms and the launch of the school’s LGBTQ Workgroup that evolved into Stonewall Pride, where she serves as the first chair. The group now has 80 members throughout the University.

Smith founded the Booked for Lunch Club in 2017 with nine members; today it has more than 100 from across campus and continues to meet during the COVID-19 pandemic virtually. Smith says that as a book lover, the club “is near and dear to my heart.”

“The book club serves as a safe and informal place to have an honest and raw discussion about books that address diversity, equity, inclusion, social justice, current events, and professional development, and it brings diverse people together to learn from one another,” Smith said.

The club, which won Insight Into Diversity magazine’s 2020 Inspiring Affinity Group Award and was featured in the August 2020 issue, offers books free to members, who are called “diversified thinkers.” During the pandemic and telework, Smith has scheduled check-ins and book drop-offs to keep the group together. Recent readings include The Master Plan by Chris Wilson, who spoke with the group.

“Smith has helped engage the campus community in creating a dialogue surrounding racism, sexism, and homophobia,” Sonnier said. “With the success of Smith’s work and collaborations, her initiatives and name have become widely known by many across USM and attended by individuals across our institutions.”

Smith has been a vital partner in working with UMBPD to ensure that officers are trained through Safe Space, a workshop that provides information about how to support LGBTQ+ students and employees. She has been a facilitator of the program through UMB’s Intercultural Leadership and Engagement Center since 2016, leading multiple workshops. She also initiated an effort to collaborate with UMBPD’s Community Outreach and Support Team to distribute survival kits for the homeless.

In her role in UMSON’s Office of Diversity and Inclusion, she assisted with building the office from scratch and creating affinity groups, events, programs, and relationships on and off campus to promote DEI initiatives. She has had a hand in ensuring that UMSON students receive more diversity training, a key component to providing high-quality health care.

“With her help, the School of Nursing received designation as a top college for diversity and inclusion with the Health Professions Higher Education Excellence in Diversity Award in 2019 and 2020,” Sonnier said.

Smith, who called receiving the UMB diversity award “a humbling experience,” said she has been inspired by Dr. King and his principles since she was a child, watching her mother advocate for family and neighbors.

“It was not long before I was advocating for others, doing my own research, making phone calls, going to neighborhood meetings and court hearings, and writing letters and petitions for change,” she said. “My mother’s principles were similar to Dr. King’s. We were raised that no one is above or beneath us, to respect ourselves, and treat others with respect and dignity.”

Back to 2021 MLK Diversity Award Winners