West Baltimore neighbors who frequently visit the Community Engagement Center (CEC) located on West Baltimore Street may have noticed a new face in the space at the start of the year. The University of Maryland, Baltimore (UMB) has welcomed Tyrone Roper, MSW, as the new director of the UMB CEC.

Roper, originally from Denver, has lived in Baltimore for 20 years and considers Charm City a second home for himself and his wife as well as his daughter and son who now are both in college. As the new CEC director, Roper looks forward to getting to know the neighbors in West Baltimore and building a strong relationship with the community. 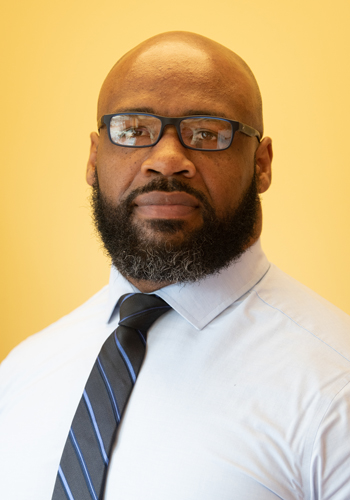 The University of Maryland, Baltimore welcomes Tyrone Roper, MSW, as the new director of the Community Engagement Center.

“I always tell folks that I’m truly just a ‘hood boy,’ ” Roper says. “The way I make connections in the neighborhood is by being my authentic self and having meaningful conversations with everyone I meet. We have conversations and I’ve developed some really good relationships so far. I’m also being very intentional about building a strong sense of support especially for the young people who visit in the center.”

Roper also has started hosting regular Community Conversations during which he sits down with a group of neighbors and talks to them about their interests and priorities for future programming at the CEC.

“I want to make sure that everything the CEC has to offer is community-driven,” he says. “By talking to the individuals in the community and really connecting with them, I’m making sure that all of our programs, services, supports, activities, and trainings are done in partnership with the community.”

Roper earned his bachelor’s degree in Human Services from Sojourner-Douglass College and his MSW from Morgan State University. He comes to UMB from the Baltimore Mayor’s Office, where he served as chief of staff for the Pugh administration’s Office of Criminal Justice. Before his tenure at City Hall, Roper spent several years working directly with members of the Baltimore community in positions with Behavioral Health System Baltimore, the Powell Recovery Center, and Baltimore City Schools.

“Thanks to my previous experience working in the city, I know a lot about the ins and outs of Baltimore,” Roper says. “I have a lot of great relationships with business owners, elected officials, and residents. Becoming the director of the CEC is a super opportunity for me to use these connections to make positive change in the neighborhood.”

New leadership at the CEC isn’t the only change West Baltimore neighbors will see this year. In summer 2020, UMB will be opening a brand-new center located a short walk away on South Poppleton Street. The new building will be six times larger than the current center and provide more space for events and programming.

Roper is eager to utilize the space for a number of new initiatives including the Emerging Leaders Academy, which will be an expansion of the PAL (Police Athletic/Activities League) Program for Baltimore high school students. He says it’s important for him to be a role model to the youth of Baltimore and to give them plenty of opportunities for success.

“It's all about giving back what I’ve been given,” Roper says. “I understand the challenges that come along with urban life and the social and economic disparities that exist within these communities. I’m where I am today because of my mentors who were intentional about investing in me and were consistent with their time and love. That’s what I hope to give back to this community.”