Roni Ellington, PhD, MA, did her homework in preparing for her role as the keynote speaker at the University of Maryland, Baltimore’s (UMB) Dr. Martin Luther King Jr. and Black History Month celebration on Feb. 5. 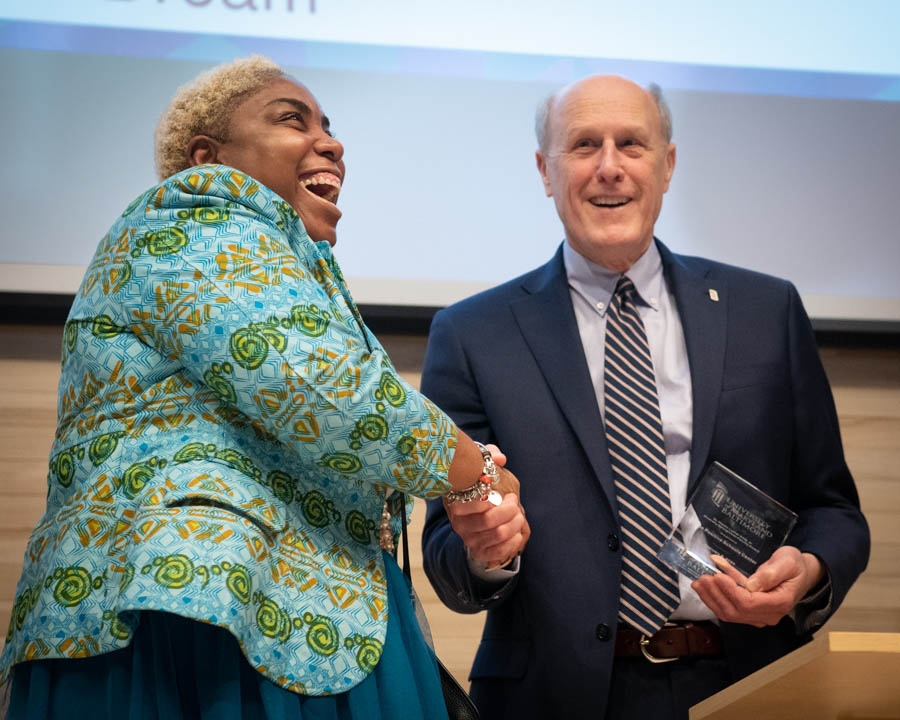 The associate professor from Morgan State University reviewed a dozen of the late civil rights leader’s speeches and found what she called a “new kindred spirit” in King’s work. She took the stage at MSTF Leadership Hall and discussed how his messages still resonate in relation to a topic she knows well: promoting science, technology, engineering, and mathematics (STEM) education for under-represented minorities.

“I didn’t want to just talk about the ‘I Have a Dream’ speech,” Ellington said during her passionate and eloquent 35-minute presentation before a crowd of 350-plus. “And as I was going through Dr. King’s work, this statement stood out: ‘Injustice anywhere is a threat to justice everywhere.’ He said the realization of justice for any person, community, or nation rests on its ability to end injustice. And where something is unjust, you’ll find inequitable outcomes, and nowhere are these inequitable outcomes more pervasive than in the STEM pipeline.”

Ellington focuses on that pipeline in her work in Morgan State’s Department of Advanced Studies, Leadership, and Policy and as a speaker, author, and owner of the Transforming STEM Network. But she says efforts to boost minority participation in STEM are not succeeding because educators’ perceptions are influenced by race, gender, and socioeconomic status when judging students’ STEM potential.

“We've been talking about diversity, inclusion, and equity in STEM education for 50 years, yet the outcomes have been dismal at best,” said Ellington, who used a PowerPoint presentation to illustrate her points. “There has been a failure to actually address the real systemic issues that black and brown children face in the STEM pipeline. I call this ‘places of oppression.’ In these places, many of our students are not able to realize their full potential.”

Ellington was familiar with those places as a child and talked about her experiences growing up in Washington, D.C., how she was getting straight A’s in less-rigorous classes before a geography teacher noticed her academic potential and suggested she move up.

“And then I had a completely different experience in a gifted-and-talented type of program,” she said. “I got access to a totally different curriculum. My eighth-grade math teacher called me a genius. I had never been called a genius in my life! I’m sharing this story not to brag about my math ability, I'm telling you this because context matters, where children land matters, what they have access to matters. And had that geography teacher not made that recommendation, you might not see me here today.”

Ellington’s keynote followed a welcome by UMB Interim President Bruce E. Jarrell, MD, FACS, and a rendition of “Lift Every Voice and Sing” — often considered the black national anthem — by the Hippocratic Notes, an a cappella group of School of Medicine students who later closed the program with “What a Wonderful World.” In his remarks, Jarrell talked about past keynote speakers at this event and how they made him think about diversity and inclusion.

What can be done when promoting STEM for minorities? Ellington provided a framework, saying STEM education must move from merely producing strategies for higher participation to embracing true transformation, that equity must be ingrained at the center of this work and not on the margins, and that it was in everyone’s best interests that all children have the opportunity to succeed in STEM.

She referenced other King quotes, from his famous “Letter from Birmingham Jail,” in which he expressed frustration with “white moderates” who were more devoted to maintaining order than seeking justice in the civil rights movement. “Dr. King wrote, ‘Lukewarm acceptance is much more bewildering than outright rejection,’ and he concluded that these moderates preferred a negative peace, which is the absence of tension, to a positive peace, which is the presence of justice,” Ellington said.

“We must be someone who says, ‘Not on my watch. Not on my watch will people be judged in ways that snuff out their scientific curiosity, their technological innovation, their engineering design thinking, and their mathematical genius,” she said. “A whole new reality is available for us, which is a world where STEM access, opportunity, achievement, and participation cannot be predicted by race, creed, color, gender, or economic status.”

After Ellington’s speech, Jarrell presented the annual Diversity Recognition Awards, which are sponsored by UMB’s Diversity Advisory Council and recognize individual and/or group achievements in the areas of diversity and inclusiveness.

The Positive Schools Center, a K-12 school-based services program within the Social Work Community Outreach Service initiative at the School of Social Work, was honored as Outstanding UMB Faculty/Unit for its work to improve school climate in Baltimore City, teach less punitive approaches to discipline, and strengthen conversations around racial justice and equity.

Elodie N. Tendoh of the School of Pharmacy was named Outstanding UMB Student for her leadership and mentoring with the Student National Pharmaceutical Association, the UMB CURE Scholars Program, and the President’s Student Leadership Institute, among other groups. The fourth-year student is a mother of two and a former biology teacher in her native Cameroon.

Bill Joyner, LMSW, senior economic inclusion specialist in the Office of Community Engagement (OCE), was recognized as Outstanding UMB Staff for his role in supporting OCE’s strategic planning and recruiting local businesses from marginalized populations to be part of the University’s supply chain, particularly in relation to catering services. Jarrell noted that the award nomination described Joyner’s work as “literally putting UMB’s money where its mouth is.”

After the presentations, six city students were honored for their participation in UMB’s Dr. Martin Luther King Jr. Oratorical Contest in which they wrote about a King quote or what Baltimore means to them. Jarrell also pointed out a group of UMB CURE Scholars sitting among the crowd. Later, the students in the University’s STEM pipeline program stood outside the auditorium and spoke to attendees about their research posters, which included topics such as “The Effects Social Media Has on Mental Health,” “New Discoveries in Lung Cancer,” and “The Impact of Technology on Mental Illness and Society.”