University of Maryland, Baltimore (UMB) President Jay A. Perman, MD, thanked legislators in Annapolis for supporting the University’s mission “that takes us into communities across the state — many of them with vulnerable populations, underserved populations” during committee meetings on Feb. 12 and Feb. 14.

In testimony before the Senate Budget and Taxation Committee and the House Appropriations Committee, Perman urged support of Gov. Larry Hogan’s Fiscal Year 2019 higher education budget, including funding for new programs to combat the state’s opioid addiction crisis and to expand training programs for health care providers in underserved areas of Maryland. 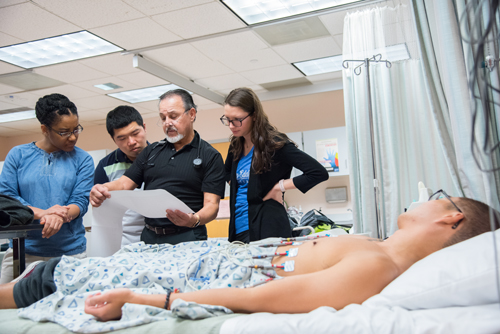 “We have a footprint across this state — training a workforce that meets Maryland’s needs and powers our prosperity,” Perman said, adding that Maryland has the country’s highest per-capita demand for health professionals just as the state is grappling with a significant public health crisis. “Many of them are aging out of the workforce — and we don’t have enough young professionals to replace them.”

To address this issue, UMB has proposed creating the Substance Use Disorder Internship Program. The program, to be operated by the University of Maryland School of Social Work (UMSSW), would support an increased number of social work students pursuing careers in this area. Interns would be placed in emergency rooms, clinics, residential treatment centers, and other sites alongside social workers and other clinicians who now provide services to those with addiction. Students would receive a stipend covering tuition, books, and additional training for two years. In return, they would commit to working in a pre-approved substance use treatment program for two years after graduation.  Another new initiative would create a statewide physician assistant (PA) training network. PAs act as primary care providers, along with physicians and nurse practitioners, diagnosing and treating patients and prescribing medication. They may work autonomously or as part of a health care team. UMB operates a PA training program in partnership with Anne Arundel Community College, graduating 40 PAs each year.

“With enhancement funding and partnerships with fellow universities in high-need regions, we could grow the number of PAs we graduate each year to 90,” Perman told legislators. New PA programs are being planned with Frostburg State University, the University of Maryland Eastern Shore (UMES), and Towson University. Under the plan, UMB would act as the sponsoring institution, oversee the network management, and handle faculty recruitment, retention, and advancement.“We’d establish a system to manage clinical rotation sites — making sure that underserved areas are included in these rotations,” Perman explained. “This is critical because our previous work with UMES has taught us that at least half the students who spend their entire clinical experience in an underserved region will stay there to practice.”

After testimony on UMB’s part of the state budget, Perman was joined by University of Maryland, College Park (UMCP) President Wallace D. Loh, PhD, JD, to present the latest endeavors of the University of Maryland Strategic Partnership: MPowering the State. Formalized by the legislature in 2016, the MPower partnership began in 2012 as a means to leverage the different strengths of the two universities to pursue research and service projects neither could accomplish alone.

“This partnership is a powerful force in Maryland — with a real impact on the lives of Marylanders,” Perman began. “I’ve already mentioned the opioid epidemic that’s ravaging this state and this nation. One of the new collaborations you’re funding through MPower is a suite of studies that can help us develop better policies and protocols for ending opioid addiction.”

Among the MPower studies Perman and Loh discussed were:

Perman and Loh also reminded legislators of the work of UM Ventures, an MPower program that brings research out of the lab and into the marketplace, so that new pharmaceuticals, therapies, and devices can quickly be applied to improve the lives of Marylanders.

Since the inception of UM Ventures, the number of technologies the two universities license annually to commercial partners has doubled. And in just the last two years, those technologies have been used to launch 35 startup companies.This year, with funding made available by the legislature, UM Ventures launched the Center for Maryland Advanced Ventures, opening up a culture of innovation and entrepreneurship beyond the two universities to include the rest of the University System of Maryland and providing an innovation district where academic entrepreneurs can get the training, early-stage funding, and experience they need to launch their own startups.

Finally, lawmakers got an update on perhaps the best-known MPower project — the Center for Sports Medicine, Health and Human Performance at Cole Field House. The center has already awarded seed grants to support research into spinal cord injury repair, mapping brain activity, and the impact of traumatic brain injury on human genes and microbes.

“We've been working together now for six years. I think that our successors as presidents and your successors as leaders of the state, when they look back, say, 20 years from now, they will probably say that the most significant thing to higher education was the passage of Senate Bill 1052 (which formalized the UMB/UMCP strategic partnership)," Loh said. “This is a truly transformative partnership.”