Robert Gallo, MD, The Homer & Martha Gudelsky Distinguished Professor in Medicine, co-founder and director of the Institute of Human Virology at the University of Maryland School of Medicine, and co-founder and international scientific advisor of the Global Virus Network, was awarded Italy’s Magna Graecia International Prize, an award created in 1997 by the Magna Graecia Foundation that is bestowed to the most influential Italians and Italians of origin who have embodied and symbolized, in the most diverse sectors, the best qualities of Italy by extending Italian culture beyond national borders.

“I am honored to award the prize to a Magna Graecia son, to a man who inherits in his genes the highest values of Western culture,” said Hon. Nino Foti, president of the Magna Graecia Foundation.

“Dr. Robert Gallo's contribution to the whole of humanity derives precisely from his roots in Magna Graecia, the ancient incubator of Western civilization and medical science where figures of gigantic proportion such as Alcmeone and Pythagoras laid the foundations of the Krotonian school of medicine and the Italic Pythagorean School, respectively. It was these two geniuses who with their revolutions covered the birth of science and sprouted the bud of the human personality, an indication of a new approach to investigation and research, a rational anxiety aimed at the love of knowledge and the renaissance of nature. 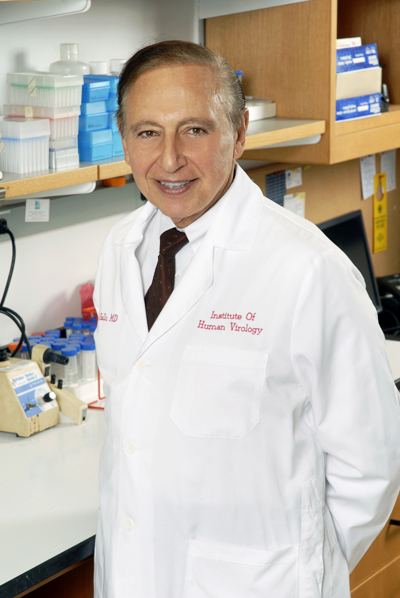 "The innate feeling of the state of health animated the desire to understand the morbid phenomena and the causes that generated them. ‘Knowing oneself,’ as Socrates liked to repeat, through the modern exploration of origins is certainly a goal worth fighting for. Dr. Robert Gallo is the living testimony inherited from this origin in the past, the legacy of those ancient experiences, a monumental knowledge that today helps us to understand the profound meaning of one’s own attitude towards life, death and destiny.”

“The award bestowed upon Dr. Gallo by the foundation is given in recognition of his prolific and magnificent contributions to the science of virology,” said Arthur J. Gajarsa, senior counsel at WilmerHale and member of the Institute of Human Virology at the University of Maryland School of Medicine Board of Advisors.  “But he is also a humanist whose scientific research in the field has saved thousands of lives in all parts of the world. This award also recognizes his family roots in Italy of which Dr. Gallo is very proud.”

“It is with heartfelt appreciation that I accept this honor because not only is it a privilege, the recognition has personal meaning since a significant part of my family comes from the region of Calabria and Puglia,” said Gallo.  “I truly love this part of Italy, in particular, Sicily and its island.  I also enjoy ancient Greek mythologies and ancient cultures of southern Italy.”

Since 1996, Gallo has been co-founder and director of the Institute of Human Virology and professor of medicine at the University of Maryland School of Medicine. He is also the Gudelsky Distinguished Professor in Medicine and co-founder and international science advisor of the Global Virus Network (GVN).

For 30 years, he was at the National Cancer Institute (NCI) in Bethesda. While at NCI, he and his co-workers discovered interleukin-2 (Il-2) in 1976. Il-2 was the first cytokine (“messenger” molecule that allows cells to communicate and alter one another’s function) and proved to be a major tool for immunology and the discovery of all human retroviruses.

Gallo and his colleagues then opened and pioneered human retrovirology with the discovery of the first human retrovirus (HTLV-1) and, along with Japanese investigators, showed it was a cause of a particular form of human leukemia.

A year later, he and his group discovered the second known human retrovirus (HTLV-2). Gallo and his colleagues also co-independently discovered HIV, provided the first results showing that HIV was the cause of AIDS, and developed the life-saving HIV blood test. In 1986, he and his colleagues discovered human herpes virus-6 (HHV-6), the first new herpes virus found in more than 25 years, and in 1995 discovered the first endogenous inhibitors of HIV, namely some of the beta chemokines. This helped find the HIV co-receptor, CCR5, and opened up entirely new approaches to the treatment of HIV disease.

Gallo has been awarded 35 honorary doctorates from 12 countries, is a member of the U.S. National Academy of Sciences and Institute of Medicine (National Academy of Medicine), and is a member of the National Inventors Hall of Fame. He is also the recipient of numerous worldwide scientific honors and awards.  According to the Institute for Scientific Information, Gallo was the most cited scientist in the world from 1980 to 1990, and he was ranked third in the world for scientific impact from 1983 to 2002. He has published close to 1,300 papers.

About the Institute of Human Virology

Formed in 1996 as a partnership between the State of Maryland, the City of Baltimore, the University System of Maryland, and the University of Maryland Medical System, the IHV is an institute of the University of Maryland School of Medicine and is home to some of the most globally recognized and world-renowned experts in all of virology. The IHV combines the disciplines of basic research, epidemiology, and clinical research in a concerted effort to speed the discovery of diagnostics and therapeutics for a wide variety of chronic and deadly viral and immune disorders — most notably, HIV, the virus that causes AIDS. For more information, visit www.ihv.org and follow us on Twitter @IHVmaryland.