The University of Maryland, Baltimore (UMB) welcomed three ambassadors from the European Union (EU) to the Health Sciences and Human Services Library’s Gladhill Board Room for a lively discussion about innovation and economic development on Tuesday, Dec. 3, 2019. 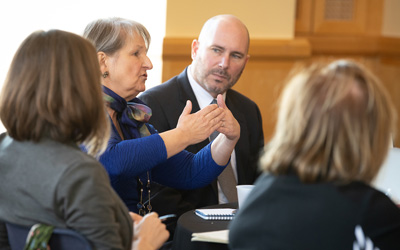 The Hon. Andre Haspels, ambassador of the Netherlands to the United States; the Hon. Laszlo Szabo, ambassador of Hungary to the U.S.; and the Hon. Dirk Wouters, ambassador of Belgium to the U.S., shared their insights on forging partnerships with American institutions in a panel discussion titled “The European Union: An Innovation Partner for Maryland.”

The ambassadors’ visit to UMB was part of a delegation of EU member state ambassadors’ first-ever joint outreach trip outside of Washington, D.C. Before coming to Baltimore, they attended a plenary meeting in Annapolis with Gov. Larry Hogan, who tweeted, “Today we had the honor of welcoming ambassadors from the European Union to Govt House on behalf of the State of Maryland and the @NatlGovsAssoc. We are working together every day to help advance a transatlantic agenda based on a common history, shared values, & enduring ties.”

The trip aimed to strengthen the commercial ties between Maryland and EU member states. The EU is Maryland’s biggest source of foreign direct investment, and more than 100,000 jobs in Maryland are created through trade and investment with EU states.

During the panel discussion at UMB, each ambassador identified his homeland’s strengths in innovation and technology and suggested ways in which transatlantic collaboration could be mutually beneficial. They also shared obstacles that can be encountered when dealing with international regulations, trade, and research.

Ambassador Szabo of Hungary explained that despite obstacles, international collaboration is valuable and begins in meetings such as the one at UMB. “The value of these types of meetings is to meet face-to-face and identify new projects,” he said. “You have something, I have something; let’s put it together and see where the synergies are.”

In Hungary’s case, the country’s low tax rate and low cost of labor make it a great entry point into Europe for American companies, according to Szabo.

Ambassador Wouters touted medical devices, nanotechnology, and waste management solutions among Belgium’s most recent innovations. Calling the EU a club worth defending as it creates a stronger base for technology and science across Europe, Wouters added that the United States and the EU are natural allies when it comes to innovation.

Wouters also explained Horizon 2020, an EU research and innovation program with nearly €80 billion of funding available between 2014 and 2020. According to its website, Horizon 2020 “promises more breakthroughs, discoveries, and world-firsts by taking great ideas from the lab to the market.”

“That’s where a lot of our researchers and universities try to get support,” said Wouters, adding there are more than 1,200 United States research partners working with the program, including some in Maryland. “The United States has become the most important non-European partner in this European research program and I’m pretty sure there is room to improve that.”

Ambassador Haspels echoed the value of cooperation, saying, “It’s important to realize both for the United States and for Europe that we need to cooperate and that we cannot come up with solutions by ourselves.”

Julie Lenzer, chief innovation officer at the University of Maryland, College Park, understands the role collaboration plays in the delicate intersection of academia and entrepreneurship.

“We have a lot to gain by forging stronger partnerships with universities and startups around the world,” she said. “Attending this forum helps us to inform our companies who are looking to do business in the EU with some challenges they have to look out for, as well as some of the opportunities.”