A single mother living in West Baltimore loses her oldest son to gun violence. She heard the gunfire that killed him, because it happened less than a block from her home. 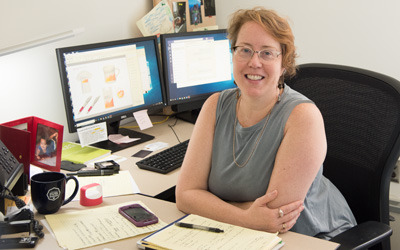 It has been hard getting out of bed, and her job is on the line. Her landlord is threatening eviction because she’s late paying rent. Plus, her younger children are acting out because their brother was killed.

This is a picture that attorney Lydia Watts, JD, executive director of the Rebuild, Overcome, and Rise (ROAR) Center, paints of a client who could make use of the center’s wraparound services for crime survivors.

There’s the actual crime, and there’s the aftermath, which Watts describes as a “tsunami” of legal, social, medical, and mental health issues that can overwhelm a victim who has nowhere to turn.

The ROAR Center at the University of Maryland, Baltimore (UMB) is meant to be a haven for people experiencing that tsunami — a “one-stop shop” where victims of crime can access a full range of services.

Funded by a grant from the Governor’s Office of Crime Control and Prevention, the ROAR Center opened in January 2019 with a mission to “engage with individuals and communities in Baltimore City affected by crime by providing holistic, client-driven services to survivors of crime and supporting efforts to reform systemic responses to crime.”

Administered by the Francis King Carey School of Law, the ROAR Center is a collaborative project established to build on the vast expertise and community connections of UMB’s six professional schools — law, nursing, social work, dentistry, pharmacy, and medicine — to provide services to the broader UMB community and surrounding neighborhoods.

Maryland Carey Law Dean Donald B. Tobin, JD, says the idea behind the ROAR Center is to provide holistic services to survivors traumatized by crime. “We have a long history of working with the community, but after Baltimore’s unrest [in 2015], we redoubled our efforts to explore ways we can make a difference to people in the community,” Tobin says.

The staff, which includes attorneys, a paralegal, social workers, and a nurse, represents UMB’s commitment to interprofessional services and community outreach.

According to Watts, research shows that vulnerable populations are at the highest risk for victimization. This includes immigrants, people of color, members of the LGBTQ community, people living in poverty, sex workers, and other marginalized communities. “All of those populations are at greater risk of being victimized and are also less likely to call police,” Watts says.

ROAR clients do not need to have reported the crime to the police to receive help. The center’s services are free and have no income restrictions. The only criteria, Watts says, is that there is a history of being a victim of crime. “Even if the crime happened some time ago, we can still help you,” she says. “The impact of the crime can last for years.”

Located on the third floor at 520 W. Fayette St., the ROAR Center offers a welcome respite from the busy street below. For adults, there’s a comfortable sofa, a bookshelf stacked with reading material, and a coffee station. For kids, there’s a toy box filled with stuffed animals, games, and markers.

The small comforts of home create a space where clients, whom the ROAR Center team refers to as “survivors,” can feel safe to discuss their cases and make use of the diverse array of services designed to help them regain their footing after a traumatic event.

Justina Prince appreciates these small comforts. Two years ago in Baltimore, she was raped by an acquaintance and left with deep emotional scars. “After being assaulted, I closed myself off,” she says. “I lived in my bathroom for months, barely leaving, having to call people to bring me food and water.”

Prince was ROAR’s first client when the center opened in January 2019. “When I reported before ROAR existed, I felt like a victim. Now that I have ROAR, I feel like a survivor. I know that somebody’s advocating for me,” she says, her voice filled with emotion.

The ROAR Center is there to “fill the gap” of needs not addressed by the justice system, Watts says. “It’s really the best approach in terms of being able to help a survivor rebuild, overcome, and rise — to go from a place where life is in chaos to functioning again.”

The three staff attorneys help deal with the legal needs of clients impacted by crime, including victims’ rights during investigation and prosecution, housing, employment and education accommodations, public benefits, protection and peace orders, and applying for and appealing denials of criminal injury compensation.

However, the need for survivor assistance doesn’t end with legal issues. The ripple effects of crime often have a negative impact on survivors’ mental and emotional health. Social worker Monifa Jeffrey-Riggins, MSW, provides one-on-one talk therapy to ROAR clients seeking to move beyond their trauma.

“We create a space for people to have an opportunity to process their thoughts and their feelings around the traumatic experience they survived,” she says.

Social worker Laurel Smith-Raut, MSW, serves as client case manager. The 2007 graduate of the School of Social Work says she loves helping survivors wade through the complex benefits system to help them work toward a positive vision for the future.

Prince is grateful for the assistance. “It’s a huge, scary thing for somebody who’s in the middle of dealing with trauma to navigate a bureaucratic system,” she says. “For somebody to say, ‘You don’t have insurance? Let me deal with that,’ is a huge weight lifted.”

“ROAR is something unique that the community needed,” adds Dana Blech, JD, a 2018 graduate of Maryland Carey Law who is a legal fellow at the center. She says she enjoys stepping outside of the law school and connecting with clients “who right now, in this moment, need my help.”

She’s invigorated by her co-workers, whom she says are an “amazing team of can-do problem-solvers.” Adds Blech, “Most places will say, ‘We don’t do that, we do this.’ I feel like we’re one of the few places that says, ‘No, we do everything. We’ll figure it out.’”

Prince is thankful for the help provided by ROAR: the counseling, the legal support, the case management, and the shoulder to cry on. “We’re all in it together,” she says. “ROAR isn’t about getting convictions — yes, there are lawyers who are fighting for that — but ROAR is about the support system around the victim so [they] can become a survivor no matter what they decide in court.”