As president of the University of Maryland, Baltimore (UMB), Jay A. Perman, MD, has challenged the University to promote big ideas and be forward-looking. To celebrate his nearly 10-year tenure, however, a look backward was appropriate.

In that vein, nostalgia and sentiment filled the air Dec. 12 at the SMC Campus Center, where a crowd of about 400 packed the second-floor Elm Ballrooms to pay tribute to Perman, who will become the fifth chancellor of the University System of Maryland (USM) on Jan. 6. 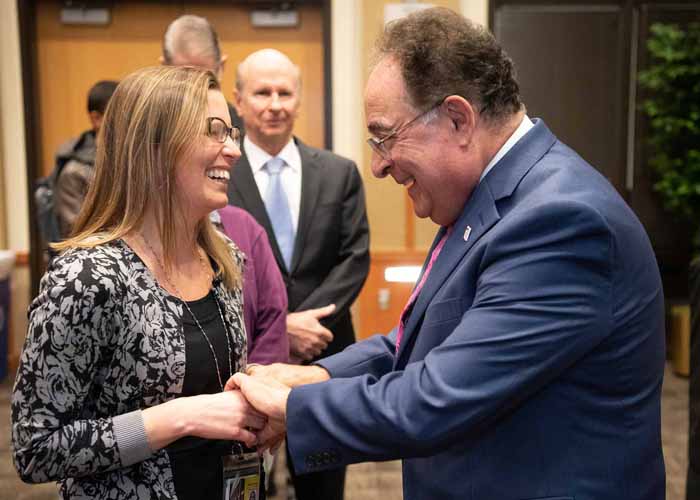 Dr. Perman greeted a line of well-wishers before and after the celebration on Dec. 12 at the SMC Campus Center.

Students, staff, faculty, and community members enjoyed refreshments and were treated to a 15-minute video extolling Perman and his presidency, followed by remarks from Perman and Bruce Jarrell, MD, FACS, the executive vice president, provost, and Graduate School dean who will assume the role of interim president. It was an emotional gathering, and in the video, Elsie Stines, DNP, MS, CRNP, assistant vice president of special projects and initiatives, summed up the day’s sentiments as she spoke through tears, calling Perman a “great boss, colleague, teacher, mentor, and friend.”

“I know that Dr. Perman was put on this earth to do what he’s doing,” said Stines, who has worked with him for 20 years and oversees the weekly President’s Clinic where Perman, a pediatric gastroenterologist by trade, treats patients. “He’s a good guy, and this [leading USM] was his calling. He’s going to make a huge difference system-wide This is what he was called to do — and so I respect that, I understand that, and I’m very happy for him.”

(View the video below.)

The event was dubbed “Celebrating the Perman Years,” and no reminiscence of his tenure would be complete with a recap of the Perman priorities, including interprofessional education, global health, diversity and inclusion, and community engagement. The latter was particularly resonant as Ashley Valis, MSW, executive director, strategic initiatives and community engagement, related how a community member handed Perman a gift bag after the Founders Week Gala this past October.

“In the bag there was a tie and a commemorative glass as thank-you gifts, and there was an envelope with a card that said, ‘Thank you for growing a seed.’ And inside the card was two dollars,” Valis said in the video. “All Dr. Perman wanted to know the next day was: ‘What is this woman’s name, where does she live, and I need to get her a thank-you note.’

“I think that shows how meaningful UMB’s engagement endeavor is to the community, how thankful people are for Dr. Perman, but also how grateful he is for being able to give West Baltimore residents opportunities that they might not otherwise have had.”

Jarrell also seized on the community engagement theme in his remarks, recalling the University leadership team’s meeting in 2010 with John Fry, the president of Drexel University, and describing his efforts as transformative for the city of Philadelphia. The group spent a day with Fry, learning about promise zones, urban development, and other initiatives to fight poverty. Fry told the group that what he’ll be most worried about when he leaves is the fate of Drexel’s community engagement efforts, whether they’d continue as a fundamental mission of the university.

“We were very struck by this comment,” Jarrell said. “So, yes, we’re here to honor Dr. Perman for his 10 great years at UMB, but we’re also here to honor his vision and legacy. So President Perman, I make this commitment: We as a group will endeavor every day to build on your legacy.”

To drive home the point, Jarrell stood in front of a large screen that said “Perman” and then was switched to say “Permanent.”

Perman was clearly touched by the video, wiping away tears as it played and saying he was “overwhelmed” by the tribute. He thanked Jarrell for taking the interim president role and for his commitment to UMB, saying, “I trust Bruce. He will be a great leader for this University.”

Jarrell offered gifts to Perman to commemorate his 2104 encounter with a third-grader named Xavier at an event to promote healthy foods at Lexington Market. Struggling to create “food art” with pieces of fruit, Perman got a little help from the youngster, who delighted the president by saying that maybe he’d grow up to be the leader of UMB. Jarrell, a blacksmith, forged a metal memento of the apple-and-grape racecar they created that day and also gave Perman a photo of him and Xavier.

Perman concluded the event with three stories. He discussed his trip this year to Zambia, where HIV-positive mothers are so thankful for UMB medical aid efforts that they call their HIV-negative children “Maryland babies.” He related how a UMB employee approached him last May after his State of the University Address and told him, “I change the light bulbs around here, and now I know why my work matters.”

And he finished by recalling his time as dean and vice president for clinical affairs at the University of Kentucky College of Medicine, where elementary and middle school students from Appalachia were invited to engage in a science pipeline program, similar to UMB CURE Scholars.

“These kids had no hope. They had no money. And we needed those kids — the same way we need our West Baltimore children — to grow up and aspire to attain the careers that all of us here are fortunate to have,” Perman said. “At the end of the program, the children gave me a piece of art with a saying by the late Malcolm Forbes: People who matter are most aware that everyone else does, too.

“That was their thank you to me. And those are the words that I want to share with you today. Because that’s what UMB is. UMB is a place where we all understand that everybody else matters just as much as we do. And so, if you want to give me a gift, make sure that you are the kind of people who matter most.”