On Dec. 14, the University of Maryland, Baltimore (UMB) CURE Scholars celebrated the most wonderful time of the year with their annual Winter Wonderland brunch, a celebration to acknowledge the scholars and their families and mentors for all of the hard work they put in during the past semester.

“I want to give special recognition to those in this room working every day to support our scholars,” Gia Grier McGinnis, DrPH, MS, told the crowd at the start of the celebration, which was held at the School of Medicine’s MSTF Leadership Hall. 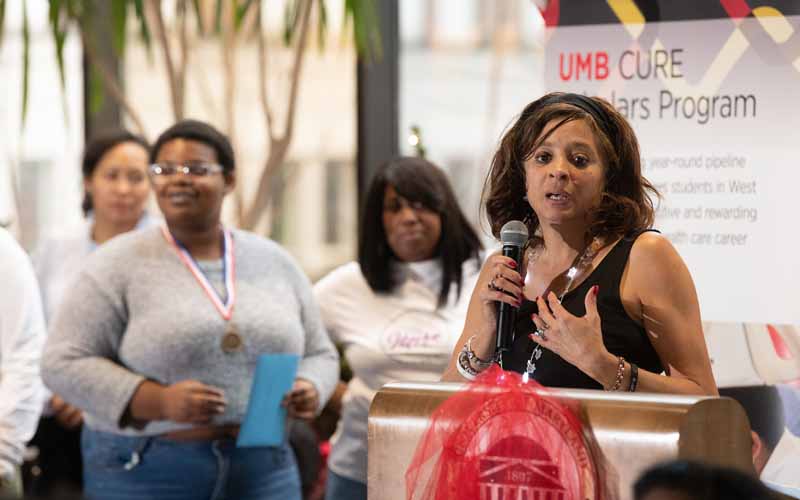 McGinnis is executive director of the CURE Scholars Program, a pilot mentoring program funded by the National Cancer Institute aimed at reducing racial disparities in public health by introducing a pipeline toward careers in STEM (science, technology, engineering, and math) to students in Southwest Baltimore. The program begins in sixth grade and continues through high school, college, and beyond.

“We often say in CURE that it takes a village,” Grier McGinnis continued. “And we are truly grateful to have all of you in ours.”

This theme of support and collaboration continued with the event’s guest speaker, Damien Myers, MD, MPH, chief operating officer of Project Pneuma and a member of the UMB Foundation Board of Trustees.

“I look around this room and I see you have parents and guardians that are invested,” he told the scholars during his keynote presentation. “You have their support and a whole network of mentors that care about you, so you should never feel unsupported on your journeys.”

Myers also talked about the significance of self-care, which is important for both the scholars and their families especially during stressful times like the holidays. Drawing upon his experiences growing up in Detroit with a teenaged mother, he told the CURE Scholars that it doesn’t matter who you are or where you come from, if you set your mind to it, you can achieve anything.

“Your dreams and aspirations are not defined by how much money you make or what ZIP code you live in,” Myers told them. “You all deserve a quality education and you deserve to be surrounded by adults who can help you reach greatness even if you didn’t have the best life. Don’t let fear stop you, because if your dreams don’t scare you, you’re not dreaming big enough.”

After Myers’ keynote presentation, the scholars were recognized for their academic achievements. Certificates and medals were given out for several categories, including perfect attendance, core values, and highest grade-point average (GPA). Four scholars — Aniyaa Green and Ayishat Yussuf of Cohort 1, and Kai-Yonna Hughes and Shereen Farquharson of Cohort 2 — were honored for maintaining a GPA of 4.0 or higher.

There also was a special presentation for Robin Saunders, EdD, MS, founding executive director of the CURE Scholars Program, who worked to create, shape, and grow the program into a nationally acclaimed STEM, health care, and cancer research pipeline model. Saunders recently left her role as executive director to become an executive consultant for CURE.

At the Winter Wonderland celebration, Princaya Sanders, a scholar in Cohort 1, gave a teary-eyed “thank you” to Saunders and presented her with a holiday-themed gift basket.

“She was the first one to introduce us to CURE and she was the one we would always go to when we were struggling or needed anything,” Princaya said. “We love Dr. Saunders and we wish all the best on her new journey with CURE.”

“I’ll never leave these kids,” she said. “I love them and their families to death. They are my second family, and I’m just honored to be here and that the University selected me to lead this endeavor. I truly believe that God was preparing me all my life to come to Baltimore in 2015 and start this program.”

Grier McGinnis also was given a congratulatory gift basket for officially receiving her DrPH degree from Morgan State University’s School of Community Health & Policy. Her graduation ceremony was held the day before the CURE Winter Wonderland celebration.

After the presentations, everyone was invited to take part in a full brunch spread catered by the Craving Potato Factory, which is owned by one of the CURE families. While parents and guardians were eating, the scholars were able to visit the CURE Holiday Store, which was set up in the lobby. The scholars could pick out two gifts — one for themselves and one for a loved one.

“The point of the holiday store is to give the scholars the opportunity to receive a special gift for all of their hard work this semester and at the same time provide an opportunity for them to practice the art of giving to others,” Grier McGinnis explained.

There were plenty of gifts for the scholars to choose from, including ornaments, mugs, tumblers, socks, blankets, notebooks, and even STEM-themed books and experiment kits. Mouhamed Samb, a scholar in Cohort 4 who attends Southwest Baltimore Charter School (SBCS), quickly found something for himself and his 9-year-old sister.

“I got a robotics kit for me because it looks cool and I can keep my brain working while I’m out of school,” he said. “And I got my sister a bath bomb because it’s the holidays and I think she will like the colors.”

The scholars’ siblings also were allowed to pick out two gifts from the store. Naomi Evans, a fifth-grader at SBCS, picked a purple water bottle for herself and a pair of sunglasses for her sister, Ashira, who is a CURE Scholar in Cohort 5.

“My sister loves sunglasses,” Naomi said. “She always asks for some, but my mom says no because she thinks she will break them, so I thought I would get some for her for Christmas.”

As the Winter Wonderland celebration came to a close, the CURE Scholars, their families, and their mentors wished one another a happy and safe holiday break. Although the scholars will be out of school for the holidays, Grier McGinnis has plans to keep them academically engaged during their time off.

“We want to spend a little bit of the winter break taking scholars to meet professionals within their academic concentration,” Grier McGinnis said. “We’ll have the scholars go to a casual meeting with a vet or an engineer or a physician so we can maximize our time off together and hopefully find pockets of interest career-wise for each scholar.”

Weekly after-school CURE programming will resume once school is back in session in January 2020.