A national journal focusing on health care and health policy for the first time devoted an entire issue to the topic of oral health, drawing upon expertise of faculty at the University of Maryland School of Dentistry (UMSOD).

Richard J. Manski, DDS. MBA, PhD, professor and chair, Department of Dental Public Health at UMSOD, served as theme adviser of the December 2016 issue of Health Affairs, and was among authors of 13 peer-reviewed papers on the topic. The issue also contained four other pieces that served to further raise the profile of oral health. 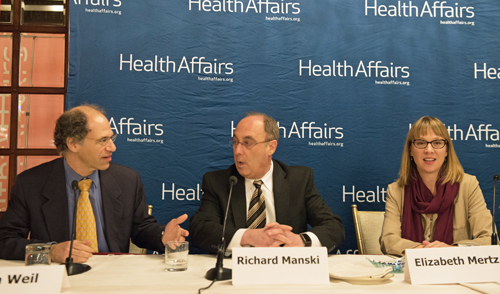 Manski and colleagues published “Projections Of Dental Care Use Through 2026: Preventive Care To Increase While Treatment Will Decline,” a forward-thinking assessment of the factors likely to affect future trends in dental care in the United States.

Natalia Chalmers, DDS, PhD '08, director of analytics for the DentaQuest Institute and also a member of the Dean’s faculty at UMSOD, published  ”After Medicaid Expansion In Kentucky, Use Of Hospital Emergency Departments For Dental Conditions Increased.” In the study, Chalmers and colleagues found that adults covered by Medicaid who used the departments for treatment of oral health conditions had high levels of chronic comorbidities.

Manski was selected to appear on the opening panel at a briefing held by Health Affairs in Washington, D.C., on Dec. 7. He commented on the timing of the event and publication of the issue, occurring a month after the election of President-elect Donald Trump, who has said he wants to repeal and replace the Affordable Care Act.

“We are likely to experience a health care environment quite different than what we expected to face just a few weeks ago,” he said, characterizing the papers as still relevant and as providing a road map on how to move forward.

That divide was the subject of an analysis and commentary in the December issue by Elizabeth A. Mertz, an associate professor in the Department of Preventive and Restorative Dental Sciences, School of Dentistry, and the Healthforce Center, both at the University of California, San Francisco. She appeared with Manski on the opening panel along with Health Affairs editor Alan Weil.

As Weil observed in his editorial: “If one theme stands out in the collection of oral health papers that appear in this month’s issue of Health Affairs, it is that the divide between dental care and medical care is vast, has significant consequences for patients, and is entirely of our own making.”

Chalmers also appeared on one of the Dec. 7 panels, speaking during a discussion of Medicare, Medicaid, and oral health about her study on heavy emergency department usage.

In his opening remarks, Manski referred to the study by Chalmers and colleagues as reminding everyone that ”even with the best of intentions our expectations are sometimes confounded with unexpected and unintended consequences.”