In a new study, University of Maryland School of Medicine (UMSOM) researchers have modified a rabies virus, so that it has a protein from the MERS virus. This altered virus works as a 2-for-1 vaccine that protects mice against both Middle East Respiratory Syndrome (MERS) and rabies.

Because it uses an already-tested vaccine for rabies, the innovative combination could speed development of a MERS vaccine for humans. Currently no vaccine exists for this new and highly fatal virus. The study, published in the latest issue of the Journal of Virology, found that the vaccine protected mice from infection with MERS. 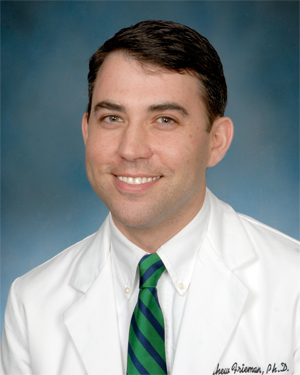 “This is the first time anyone has used this strategy to create a MERS vaccine,” said the lead researcher on the study, Matthew B. Frieman, PhD, an associate professor in the Department of Microbiology and Immunology at UMSOM. “This could give us a powerful mechanism to fight the virus.”

MERS has killed more than 630 people since it was first discovered four years ago in Saudi Arabia. It has infected more than 1,800, meaning that about a third of those who are infected die – a very high fatality rate for an infectious disease. It appears that the disease spreads to humans from camels, who may themselves have been infected by bats. Research has shown that MERS is similar to Severe Acute Respiratory Syndrome (SARS), which emerged in 2003 and resulted in more than 8,000 infections, killing 10 percent of patients. Both diseases, which are caused by coronaviruses, cause serious respiratory problems.

Through genetic engineering, Frieman and his colleagues produced a modified rabies virus that expresses a protein from the surface of the MERS virus, known as a spike protein, on the surface of the rabies virus. He describes the MERS protein as looking like a “lollypop sticking out of a tennis ball.” Through an existing, Food and Drug Administration-approved process, scientists then treated the modified virus chemically, inactivating it so that it cannot replicate. This inactivated virus is itself the vaccine, which triggers an immune response but poses no danger to the recipient.

Because it included the MERS spike protein, the dual compound also triggered an immune response to MERS. In tests on mice, the MERS-rabies vaccine protected against both diseases. The double vaccine could prove useful not only in humans, but in camels, which are the reservoir of the disease. About 95 percent of camels in the Middle East are infected with MERS when they are young; because their immune system reacts differently from humans’, it gives them the sniffles rather than kills them. But if they were vaccinated against MERS – many of them already receive the rabies vaccine – they would not be able to spread the disease to humans. Frieman is now planning to begin testing the approach in camels.

In another recent paper, also published in the latest issue of the Journal of Virology, Frieman examined how the body responds to MERS. He examined a range of immune cells, to see which play the largest role in the body’s response to the virus. He examined three types of immune cells in particular: CD8 T cells, CD4 T cells, and macrophages. It appears that macrophages play a much larger role than the other two in protecting the body, at least in a mouse model of disease. With this knowledge, researchers will now try to understand how macrophages accomplish this. By unraveling this, they could come up with better strategies to fight MERS.