Students from three Southwest Baltimore schools briefed the Baltimore City Council on the UMB CURE Scholars Program Monday evening. Wearing their white lab coats, two dozen representatives from the Green Street Academy, Southwest Baltimore Charter School, and Franklin Square Middle School came with a message about the importance of the program to their education and one day, their careers.

Shakeer Franklin, a student at Franklin Square Middle School, began his presentation on a lighter note, asking the council to “call me Dr. Franklin, if you don’t mind.” He explained that his dream is to attend Baltimore City College High School, and later Morehouse College in Atlanta, where he says he will study to become a psychotherapist and “world-renowned” lawyer. The CURE Scholars Program, he said, “helps me by not only giving me a scholarship which is so awesome, it also helps me by motivating me to want to do my homework and motivating me to want to get to school on time. And I say this because if I do not do these things I can no longer be in the program and me or my mom doesn’t want that.” 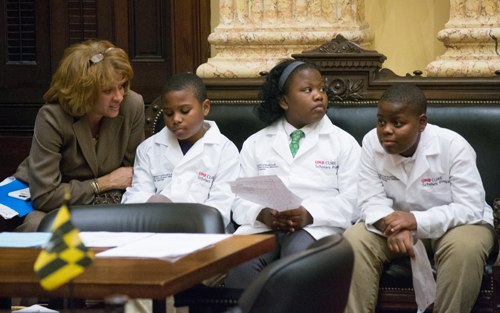 Another student, Davioin Hill of the Southwest Baltimore Charter School, echoed Franklin’s commitment to the program. “The CURE program has already had an impact on my family because all of the hard work we have to do to keep in the program,” he said. “We all have to get involved because it’s an opportunity to get in the right school and get good training for a career.”

Hill drew smiles and laughter as he described some of the hands-on scientific experiments the students have conducted, including a test of the so-called “five-second rule.” He explained how the class tested the floors of the classroom and bathroom for bacteria. “It was gross and cool at the same time,” he told the council.

The last of the three student presenters, Nya Goins, a student at the Green Street Academy, advised the council that the CURE Scholars Program is an investment in the future. “This program really impacts on my future because, did you ever hear the saying it’s better to give than receive? I received to get in such an amazing program,” she said. “Maybe one day it will be my time to give a chance like this to other kids who want a great education.” Goins also challenged the council to “keep and watch over better kids and better education because one day we will be your future.”

After asking the rest of the students to stand and be acknowledged, council president Jack Young expressed his support for the CURE Scholars Program. "This is what we have to continue to support, programs like these that make a difference in the lives of our children and spark their interest to be the best that they can be,” he said.

“Tell Dr. Perman [president of the University of Maryland, Baltimore] I said ‘thanks, he kept his word’ and to continue doing a great job trying to make a difference in our schools.”