As a young clinician at the Government Dental College in Bangalore, India, Vivek Thumbigere Math, BDS, PhD, routinely saw patients, many of whom were longtime users of betel nut and/or tobacco products, suffering from advanced oral cancer or periodontal disease.

But in some cases, he and his colleagues had few effective treatments to offer them.

“We got a lot of referrals and saw many, many patients with oral cancers, periodontal disease, and rare genetic disorders,” says the assistant professor in the University of Maryland School of Dentistry’s (UMSOD) Division of Periodontics. “I kind of felt helpless not being able to provide effective treatment to these patients.” 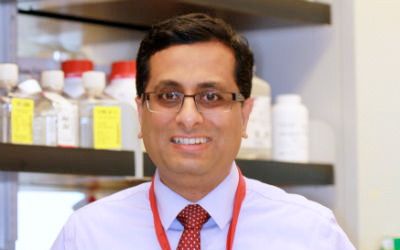 Desire to help his patients, combined with guidance from his mentors, galvanized Thumbigere Math to pursue advanced studies supplemented with research, which would provide him the necessary skill sets to develop new and effective treatments for his patients.

In 2004, Thumbigere Math joined the University of Minnesota School of Dentistry to pursue a residency in periodontology and a doctorate in oral biology. Later, he completed a postdoctoral fellowship at the National Institutes of Health under the direction of Martha Somerman, DDS, PhD, director of the National Institute of Dental and Craniofacial Research and a former faculty member at UMSOD.

Thumbigere Math has received other recognitions as well, including the Joseph Lister Award for Young Investigators bestowed in March 2018 by the AADR. In October 2018, he received the American Academy of Periodontology (AAP) Teaching Fellowship at the AAP Annual Meeting in Vancouver. In addition, he is a recipient of a University of Maryland, Baltimore Institute for Clinical and Translational Research grant voucher, which provides support for clinical and translation research.

Since arriving at UMSOD in 2017, Thumbigere Math has led a lab focused on studying periodontal disease and osteoimmunology.

“Osteoclasts are bone-eating cells, and we are trying to understand how the immune system regulates osteoclast formation and function. We are also looking at genetic factors that increases susceptibility to periodontal disease,” he says. “Ultimately, the goal is to implement the gathered knowledge towards developing new treatment and regenerative strategies for periodontal disease.”

Overall, periodontology has proved to be a good fit, Thumbigere Math says. “I debated studying oral surgery, but I find periodontology provides me the right balance to perform surgical procedures as well as pursue research.”

At UMSOD, he juggles research with treating patients, teaching pre- and postdoctoral students, and writing research grants and scientific articles for publication. As a researcher, Thumbigere Math particularly has enjoyed the interdisciplinary aspects of his investigations. “All along we are working closely with the medical folks — physicians, endocrinologists, oncologists, and geneticists. It has been a multidisciplinary approach,” he says. “We are using the oral cavity as a gateway to understanding systemic problems.”