The blood-brain barrier is a specialized network of vascular and brain cells that acts as the brain’s security system, helping to safeguard the brain and regulate the flow of substances into and out of it. While this network protects the brain, it also limits doctors’ ability to deliver effective doses of disease-fighting drugs to the brain, particularly in the case of brain tumors, which are notoriously treatment-resistant. This safety and feasibility study is a first step in attempting to overcome a major hurdle in treating these often-deadly cancers. 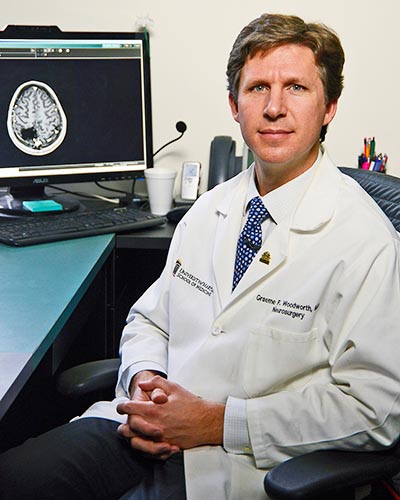 “The ability to temporarily disrupt the blood-brain barrier without causing tissue damage has the potential to dramatically alter the landscape of drug delivery to the brain for many diseases,” says the principal investigator, Graeme F. Woodworth, MD, professor of neurosurgery at UMSOM and director of the Brain Tumor Treatment and Research Center at the University of Maryland Marlene and Stewart Greenebaum Comprehensive Cancer Center (UMGCCC) at UMMC.

“If successful, this approach would allow us to use chemotherapy and other therapies in the brain in ways that are currently not possible,” says Woodworth, noting that 98 percent of currently approved drugs don’t enter the brain because of the blood-brain barrier. “If we can selectively open the blood-brain barrier, then in the future we could give a much lower dose of powerful drugs, which would likely reduce toxic side effects and make treatments safer and more effective for patients.”

The process involves injecting microscopic inert gas-filled bubbles into a patient’s bloodstream and then oscillating the microbubbles (causing them to move back and forth) with highly targeted sound waves, stretching the blood vessel walls to create temporary openings.

The U.S. Food and Drug Administration (FDA) approved the clinical trial in October 2017 after a lengthy review process. Although there are similar research studies in Canada and other countries, this was the first time the FDA approved a clinical study using this promising technology and approach.

Within a few months, University of Maryland researchers expect to open another FDA-approved clinical trial in which newly diagnosed glioblastoma patients will undergo blood-brain barrier opening prior to treatment with standard chemotherapy, temozolomide. This new ultrasound-augmented approach would target the areas where tumor recurrence would be most likely to occur.

Nearly 80,000 people are diagnosed with a primary brain tumor each year; 26,000 of these tumors are malignant. Glioblastoma is the most common type of brain cancer and the most deadly. Patients live an average of 15 months after diagnosis; the average five-year survival is only 5.5 percent.

“Glioblastoma is the most aggressive and lethal type of brain tumor, but treatment has been severely limited by our inability to get chemotherapy and other therapeutics through the blood-brain barrier,” says Kevin J. Cullen, MD, the Marlene and Stewart Greenebaum Distinguished Professor in Oncology at UMSOM and director of the UMGCCC. “Dr. Woodworth’s study is an important first step in finding an effective way to administer drug therapies that would improve patients’ quality of life and increase their survival.”

In the initial study, researchers plan to enroll up to 15 patients with suspected glioblastoma, an aggressive brain cancer, who will undergo surgery at UMMC to remove their tumor.

The morning of the scheduled surgery, patients will undergo a standard magnetic resonance imaging (MRI) scan as part of the preoperative planning process. Guided by this MRI, doctors will target a precise region within the tumor with ultrasound, while the injected microbubbles are circulating within the bloodstream. The microbubbles will oscillate within the ultrasound field, causing temporary openings in the walls of the brain blood vessels and allowing the MRI contrast agent, gadolinium, to pass into the brain tissue. The MRI scan will then be completed, documenting the extent to which the blood-brain barrier was disrupted.

The data from the MRI will be used in a system called intraoperative stereotactic neuro-navigation — an advanced 3D-guidance system that accurately localizes the tumor within the brain. After the surgery, researchers also will rigorously examine the tissue that was removed to study the potential therapeutic and other effects from the focused ultrasound procedure.

In this initial trial, the increased amount of contrast enhancement within the tumor provided by the focused ultrasound procedure may help the 3D navigation during the surgery, according to Woodworth. “The standard of care is not changing in regard to the surgical procedure. We are functionally increasing the amount of navigation data available to the surgeon,” he says.

Woodworth notes that the disruption in the blood-brain barrier is not permanent, lasting about four to six hours.

The clinical trial is sponsored by InSightec, which has developed the MRI-guided focused ultrasound technology that will be used in the study. Neurosurgeons at UMMC also are using this technology to treat patients with neurological conditions such as essential tremor and Parkinson’s disease, the latter as part of a clinical research study.

“MRI-guided focused ultrasound holds great promise in treating a variety of medical conditions, from cancer to Parkinson’s disease,” says Dean E. Albert Reece, MD, PhD, MBA, who also is executive vice president for medical affairs at the University of Maryland, Baltimore and the John Z. and Akiko K. Bowers Distinguished Professor at UMSOM. “Our physician-scientists are leading major research studies and are at the forefront of efforts to determine how this new technology can be used to provide better treatments for patients.”