A researcher at the University of Maryland, Baltimore has secured a grant that is among the first group of awards to be issued by the National Institute for Innovation in Manufacturing Biopharmaceuticals (NIIMBL) — a national institute established in 2016 to advance leadership in pharmaceutical manufacturing across the United States.

Bruce Yu, PhD, professor in the Department of Pharmaceutical Sciences (PSC) at the University of Maryland School of Pharmacy (UMSOP), has been awarded a $600,000 grant from NIIMBL to develop new analytical technologies for use in the manufacturing of biopharmaceuticals. 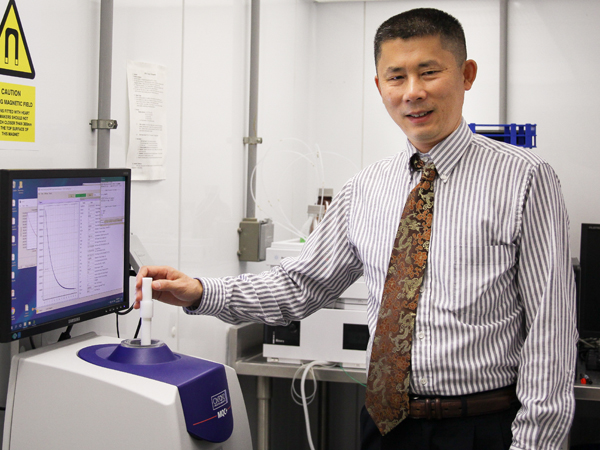 Professor Bruce Yu, PhD, is shown in his lab in the Department of Pharmaceutical Sciences at the University of Maryland School of Pharmacy.

The UMSOP team plans to collaborate with researchers from ChromaTan Corporation, a biotechnology company based in Pennsylvania, to conduct its study, which began in early March and will conclude in August 2019.

“Being one of the first institutions to receive grant funding from NIIMBL truly cements our school’s reputation as a leader in scientific discovery and the development of safer and more effective drugs in the state of Maryland and beyond,” says Paul Shapiro, PhD, professor and chair of PSC. “Dr. Yu’s work in the development of non-destructive analytical technologies for the manufacturing of biopharmaceuticals is breaking new ground in the field of drug manufacturing, and this new grant plays a key role in allowing him to continue this promising research. We are very excited about the new developments that will result from this project and how they will improve the production new drugs.”

While most medications are produced using traditional chemical manufacturing processes, biopharmaceuticals — which include vaccines, certain medications for cancer and autoimmune diseases, and emerging drugs for cell and gene therapies — are made with living cells and can be complex to manufacture on a large scale. Biopharmaceutical manufacturers rely on a wide range of process analytical technologies (PAT) — systems that take timely measurements of critical quality and performance attributes of raw and in-process materials and processes — to help ensure the quality of their drugs.

However, Yu notes that the technologies available now are prone to a number of limitations. “Current technologies often require manufacturers to manipulate their samples through dilution, separation, labeling, or the use of special cuvettes (tubes). There is a clear need for new technologies that allow manufacturers to quickly assess the quality of their products without the need for additional manipulation of the sample,” he says.

The project aims to leverage water proton nuclear magnetic resonance (NMR) spectroscopy, which relies on the water proton transverse relaxation rate to measure protein aggregation in a biopharmaceutical drug. The intent is to develop a PAT that can be used by biopharmaceutical manufacturers to help ensure the quality of the drugs that they manufacture without the need to manipulate the sample or remove it from the production line.

If Yu’s efforts are successful, this will be the first PAT of its kind available on the market, resulting in reduced costs and improved product quality for biopharmaceutical manufacturers.

“The goal of our research is to determine whether flow water NMR can serve as an in-line PAT for the manufacturing of biopharmaceuticals,” Yu says. “There really are no other technologies similar to the one that we aim to develop available at this time. In fact, all existing in-line analytical technologies require physical contact between the process stream and the sensor. The success of our research could truly transform the field.”

Yu’s project is among a group of projects that NIIMBL said in its grant announcement are designed to advance biopharmaceutical manufacturing and workforce development in the United States. These projects were awarded in response to NIIMBL’s Quick Start Project call as well as proposals initiated by NIIMBL state partners.