UMB and UMCP Collaborate on the Science of Sport

“I know what the future of Cole Field House looks like. It looks like hope to millions of Americans who suffer debilitating injury. And it looks like home to everyone who’s serious about cutting-edge leadership in the science of sport.”

Those words from University of Maryland, Baltimore (UMB) President Jay A. Perman, MD, expressed the vision of leaders from UMB and the University of Maryland, College Park (UMCP) at the completion of the first phase of UMCP's new Cole Field House Aug. 2. An audience of more than 200 academic leaders and university supporters gathered for a first look inside and were clearly impressed with the newly completed full-size indoor football practice field. 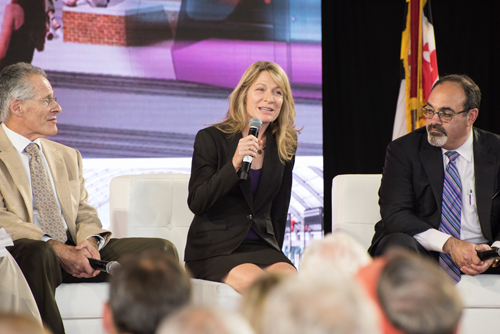 Conceptual drawings were also on display showing the rest of the Terrapin Performance Center at Cole Field House, which will include two outdoor fields, and advanced strength, conditioning, and hydrotherapy centers, creating an athletic training facility unmatched in Division I sports.

The Aug. 2 ceremony also celebrated the groundbreaking of the next phase – the construction of the Center for Sports Medicine, Health and Human Performance (CSMHHP). Under the aegis of the University of Maryland Strategic Partnership: MPowering the State, the center will bring together leading researchers in neuroscience, genomics, biomechanics, and other fields from both universities onto the front lines of advanced study of the brain and nervous system. A clinical treatment center will bring leading-edge medical facilities to campus, allowing for the rapid translation of research into practice for the benefit of the entire community. The center also will be home to UMCP’s Academy for Innovation and Entrepreneurship.

A panel of scientific and medical faculty from both universities explained the significance of the research and clinical work that will take place at Cole when CSMHHP construction is completed in 2019. Alan I. Faden, MD, professor in the Department of Anesthesiology at the University of Maryland School of Medicine (UMSOM) and scientific co-director of the CSMHHP, noted the increasing incidence and awareness of serious head injuries, particularly degenerative brain disease among former football players subjected to repeated head trauma. “Not a week goes by when we don’t see in the newspapers or on TV the impact of concussions on players in high-impact sports, but this is a much, much bigger problem,” he said. Faden noted that there are almost 4 million head injuries a year in the United States, so the vast majority of patients are not athletes. “It affects not only the athlete, where it’s been best studied, but particularly in the ends of life. So the fastest growing population of head-injured individuals is in the elderly.”

Locating the collaborative research at Cole will be one of the keys to a new approach to diagnostic and clinical discoveries in brain science, said Elizabeth Quinlan, PhD, professor in the Department of Biology at UMCP and scientific co-director of the CSMHHP. “We’re just beginning to appreciate the fact that the impact of brain trauma is not just felt throughout the brain, but throughout the body,” she said. “You can see changes in the levels of protein expression and DNA expression and even the microbiome that’s expressed throughout the body, and so studying protein expression, DNA expression, and microbiome expression is a very large-scale but fine-brain and whole-body approach to the way the brain responds to injury. It’s going to allow us to develop objective biomarkers for the severity of the injury but also the treatment success and it’s going to combine the analytical power of this campus with the clinical strengths in Baltimore to take this whole-body approach.”

The creation of an advanced orthopaedics and sports medicine clinic will benefit not only UMCP, but also the entire community, providing treatment to thousands of patients each year. “It’ll obviously improve our capacity for research and to leverage the relationship between the research community, the athletic community, and the clinical community,” said Andrew N. Pollak, MD, the James Lawrence Kernan Professor and Chair of the Department of Orthopaedics at UMSOM. “This is going to dramatically improve our ability to recruit the best clinician-scientists from around the country to come be part of this.”

The ceremony concluded with a virtual demolition of the old Cole Field House. Perman and other leaders from both universities used foam mallets to simulate striking a giant video monitor that displayed video of the old Cole. As the mallets were swung, the video showed cracks and then crumbling brick and mortar, revealing a vision of the new Cole to applause.

“Today we opened a game-changing practice field and broke ground on a remarkable research facility,” beamed a proud UMCP President Wallace D. Loh, PhD, JD. “At the University of Maryland we think big. A home to history, Cole Field House now advances the science of sport.”