Summer U Brings Youths to UMB for Learning, Fun

Inside the Health Sciences and Human Services Library (HS/HSL), at the Innovation Space, 9-year-old Renise Davis raised a pair of Google Cardboard virtual reality glasses to her eyes, momentarily transporting her to a seaside resort.

“I can see the water! I can see the water! This is so cool!” Renise exclaimed as she looked around the library while holding the viewer to her face. The Google Cardboard viewer, combined with a smart phone and a free app, was all that was needed to send her on an instant vacation.

Renise was one of several children in the new Summer U program held at the University of Maryland, Baltimore (UMB) visiting the Innovation Space on Aug. 24. The free program exposes children ages 9 to 13 to different experiences and careers during visits across the UMB community. A total of 25 children from the neighborhoods of Hollins Market, Franklin Square, Poppleton, Pigtown, and Lafayette Square attended Summer U over the course of two sessions, July 11-27 and Aug. 8-24. 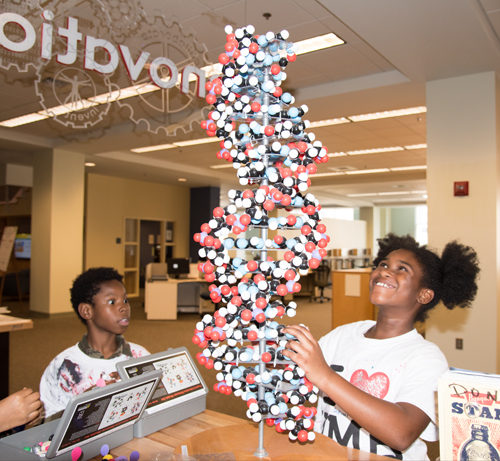 Timothy Mitchell, 10, and Autumn Curbean, 8, look over a large DNA model in the Innovation Space at the Health Sciences and Human Services Library during a session of Summer U.

The children also enjoyed touring the Dr. Samuel D. Harris National Museum of Dentistry, Davidge Hall, and the catacombs of Westminster Hall; creating arts and crafts and reading at the Community Engagement Center (CEC), participating in games, yoga, Zumba, and swimming with “Jammin” Jacob Pridemore, assistant director of sports programs at URecFit, and learning about nutritious food during a cooking demonstration by a chef from CulinArt.

“Because this is a high priority of our president [Jay A. Perman, MD], we took this on this summer,” Kelly Quinn, PhD, coordinator at the CEC, said about Summer U’s origins.  The program was administered through the CEC in close partnership with leaders at URecFit.

“Part of it is to expose children to the resources of the university and to know that it could be fun at a university campus,” Quinn said. “On their visits to the various schools, they got to learn different parts of professional life and also gained a better understanding on what is happening on the east side of MLK [Martin Luther King Jr. Boulevard.]”

Quinn said it also was important that Summer U students get familiar with the CEC as they live in the West Baltimore neighborhoods served by the center.

“We wanted to have them be close to us this summer,” she said.

Norah Salamone, a new member of the CEC’s Community Advisory Board and a Sandtown South resident, helped Quinn organize the program. She knew many of the children from James McHenry Elementary Middle School, where she worked as a literacy volunteer during the 2016-17 school year.

“It was nice to be together with them in a setting other than their school,” Salamone said.  “We were able to give them individualized support and to help their relationships with each other.”

Salamone tapped into her West Baltimore network and enlisted friends to come to the CEC and teach classes on art, nature, American Sign Language, and dance.

“They got to experience a lot of things that they don’t ordinarily get to do,” Salamone said.

“This is awesome!” said Kiyara Johnson, 12, holding up her key ring. The state-of-the-art printer allows users to take an idea and transform it into a 3D physical object. The Innovation Space also offers 3D scanners, a large DNA model, two molecule kits, a button maker, and more.

"I think exposing kids to these technologies feeds their imagination and provides them with a sense of empowerment," Zelip said. "The kids get a fun, hands-on learning experience that shows them the breadth of what UMB has to offer." One girl was so interested in the Google Cardboard virtual reality viewer that she downloaded the app on her smart phone to use a viewer and showed other Summer U youths how it worked.

"This created such a scene of excitement that nearby graduate students got interested and came over to try the viewers, too," Zelip said.

Autumn Curbean, 8, said she wants to come back next summer.

“I liked that I could come here to the university to learn and play,” she said. “I love that we got to do different activities.”

Ja’Bria Mitchell said she liked the yoga and learning American Sign Language. “This is thank you,” she said, making the appropriate sign.

Her older brother, Timothy, 10, said he learned “people come here to become doctors, and that is what I want to do, too.”