The UM Scholars Program provides UMCP math, science, and engineering students with exposure to graduate-level research while they spend the summer at the University of Maryland, Baltimore (UMB) working with University of Maryland School of Medicine (UMSOM) and UMSON faculty on mentored research projects.  The program also is designed to expand students’ knowledge and enlighten them about career choices, and it introduces UMCP undergraduates to the vast array of graduate degree programs at UMB.

UMSOM and the Office of Student Research administer the program, which is overseen by Gregory B. Carey, PhD, assistant professor in UMSOM and director of student summer research and community outreach. The program, which is conducted over the course of 10 weeks, is supported through the University of Maryland Strategic Partnership: MPowering the State. 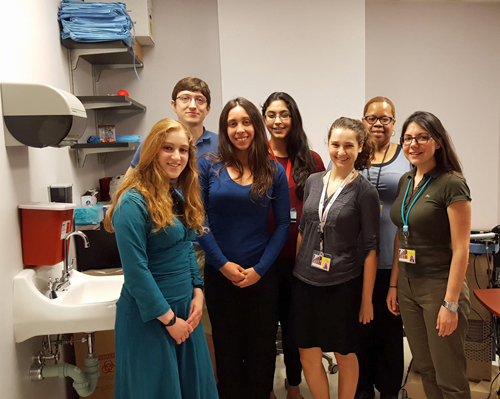 UM Scholar Shira Movsas and Luana Colloca, MD, PhD, (first row, third and fourth from left, respectively) pose for a picture with others who work in Colloca's lab.

Movsas  saw the UM Scholars Program advertised on a flier on the College Park campus and decided to apply.

“I thought it was a really cool combination of being able to do research and being exposed to different professions in the field of medicine,” Movsas said. “I attended seminars and gained experience in presenting and got a lot of cool experience.”

Colloca was “an amazing mentor,” Movsas continued. “She was happy to answer any question I had and explain the process of doing things in the lab. It was really great working with her.”

“I have been doing research (at UMCP) but not interacting with patients,” Movsas said, adding that her experience at UMB also included writing abstracts and drawing and processing blood from study participants, all of which were new learning opportunities for her. “Everyone in the lab was really helpful in teaching me what was going on and encouraging me when I didn’t know what I was doing.”

Before the UM Scholars Program, Movsas had never publically presented research or data.

“Whatever path I go on, I will have to do similar types of presentations, so that experience was invaluable to me,” she said. After concluding her oral presentation, she was thrilled when three people in the audience asked questions and she was able to answer them with confidence.

Movsas said she also enjoyed becoming friends with Sarah Gun, another UMCP student who was paired with UMSON faculty for the UM Scholars Program.

“We met through the program and became friends and would grab lunch,” Movsas said.

Gun said she learned about the UM Scholars Program in an email sent to a pre-nursing society. “I thought it was a cool opportunity to try something different since I don’t have a lot of research experience.”

The program allowed her to see “all the different possibilities that nursing has to offer,” said Gun.

Colloca and Resnick said participating in the UM Scholars Program was every bit as rewarding for them as it was for the students. This is the second year UMSON has participated in the program.

“Last year was very rewarding and this year even better,” Colloca said. “We had a fantastic opportunity, and I feel like Shira was extremely talented and the other students in the lab were very impressed with her as well.”

Colloca said she usually does not allow lab students to interact with patients directly but she was so impressed with Movsas, she made an exception.

“I had her drawing blood,” Colloca said. “She was able to learn all the basic rules and paradigms to the lab and at the same time get involved intellectually, learning and presenting with confidence."

Resnick was equally taken with Gun.

“Sarah touched my heart,” Resnick said. “I was really impressed by her passion. She was so eager to learn.”

Taking on a UM Scholar in the lab is also “a great opportunity to get some help in studies,” Resnick added. “We are always looking for opportunities to engage students in research.”