A mother tucks her young son into bed before heading downstairs to watch television. Unbeknownst to her, the boy, who has asthma, begins to wheeze in the middle of the night. In an instant, as the child remains sleeping, technology in the home causes the humidity in his bedroom to rise significantly and triggers two puffs of Albuterol to pump from an air vent. The next morning, an alert on the woman’s smart phone reports that her son had an asthma attack, and it was treated effectively — all before the boy woke up or the mom knew anything about it.

Such a scenario of a family living in a so-called “smart home” is closer than one might think. 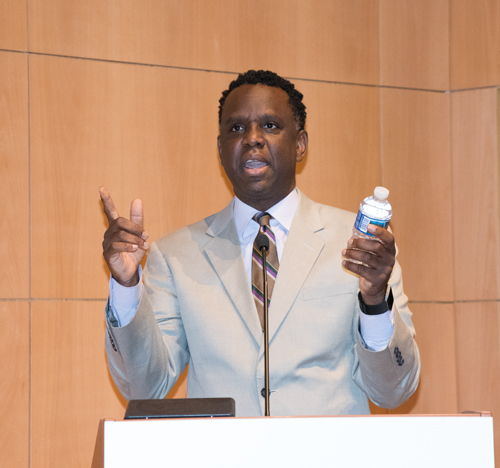 Using a bottle of water as an example, Chris Gibbons, MD, MPH, chief health innovation advisor to the Federal Communications Commission’s Connect2Health Task Force, talks about how groceries in the future will feature radio-frequency identification on labels. Gibbons spoke at the 2017 Summer Institute in Nursing Informatics held at the University of Maryland School of Nursing.

That was the message Chris Gibbons, MD, MPH, chief health innovation advisor to the Federal Communications Commission’s Connect2Health Task Force shared with more than 300 attendees of the 2017 Summer Institute in Nursing Informatics held July 12-14 at the University of Maryland School of Nursing (UMSON). He shared his insights into how technology will transform health care during his plenary address, “Digital Health, The Underserved, and Health Innovation.” The three-day conference examined the field of informatics, which enhances the quality of patient care and outcomes through the development, implementation, and evaluation of information technology.

“That’s the future. That’s what can happen,” said Gibbons, who is also the founder and CEO of The Greystone Group, a technology research, innovation, and incubation company, and an adjunct professor at Johns Hopkins University. “Was that health care? Was health care delivered? Was it effective? Of course it was. That is not in place today but there are people working on it. I know that to be a fact.”

While the market for wearable devices such as Fitbits and Apple Watches continues to grow, Gibbons said, the future of health care will feature technology built into the walls of smart homes, connected to artificial intelligences and computers developed by doctors and nurses who are monitoring these systems from an off-site hospital that doesn’t house a single bed but operates more like an air-traffic control center. Smart home technology will not only be able to determine when an aberration such as high blood pressure or an asthma attack takes place, but also why it happened and what should be done to address it, then fix the problem, all within a fraction of a second and without waiting for someone to act.

In another example, Gibbons shared the fictional story of an overworked, tired diabetic mother restricted to a 2,000-calorie a day diet. After a long day at work, she dreads thinking about what to cook that will be healthy and meets the guidelines of her diet.

“That’s why KFC survives,” Gibbons joked. In his portrayal of the future, every item purchased in a grocery store has radio-frequency identification (RFID) on the label, which transmits nutritional information to an application on the woman’s phone. She enters her dietary preferences and in less than a second, three recipes pop up that she can make in 20 minutes using the specific foods she has in her refrigerator or pantry.

“I’m trying to illustrate ways that you can see how health care is going to be so substantially different than it was before, that if we don’t push ourselves to get into the mindset, how we can figure out to make it work for our industry, for our patients, for ourselves, we will be left behind,” Gibbons said.

Among Gibbons’ other predictions for the future:

The implications for nurses in the future of health care are vast, according to Gibbons. “We already do a lot of inpatient care. I’m suggesting there’s a huge amount of innovation, of new types of nursing models, of new types of care delivery. There’s tremendous opportunities for nurses."

The conference offered lectures on topics ranging from self-management health applications to leveraging the power of digital health data for chronic diseases to engaging geriatric patients and caregivers with technology. Peer-reviewed presentations highlighting advances in informatics are also part of the annual event.

“I’ve learned a great deal,” she said. “Seeing what other people have done with technology makes me think of what else we can be doing with similar technology.”

For Vickie Elliott, RN, CCRN-CSC, a clinical informatics nurse at Peninsula Regional Medical Center in Salisbury, attending her third SINI, there is always something new to learn.

“We all have similar problems. It’s great to get ideas on how others handle them,” she said. “The speakers have been fabulous.”