Inspiring Students to Paint Their Own Futures

“One. … Two. … Three. … Let’s paint!” exclaimed Tammatha Woodhouse, the principal of Renaissance Academy High School. And with that, a group of high school students — with the help of Maryland First Lady Yumi Hogan — began putting the finishing touches on a brand-new mural inside the school. 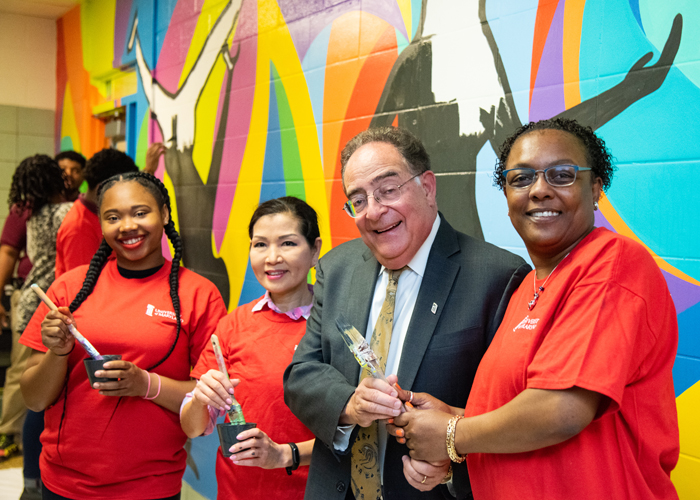 By about noon on April 5, the students could stand back and marvel at the completed work of art. What was once a plain, white stretch of hallway is now a rainbow of colors bringing new life to the third floor of Renaissance Academy. The myriad colors swirl together in pointed shapes surrounding silhouettes of students who are dancing, celebrating, and graduating.

“It makes me happy!” said Dyelle Washington, a 10th-grade student with dreams of becoming a nurse. “It brings joy to our school and it gives us all a lot of inspiration of what we could be. It really makes us feel like a family and I just love it!”

The mural at Renaissance Academy is the third in an ongoing public mural series facilitated and sponsored by the University of Maryland, Baltimore’s (UMB) Council for the Arts & Culture, for which Hogan is honorary chair. In fact, it was the First Lady who came up with the idea to have the council commission public murals at UMB’s many partner schools in West Baltimore neighborhoods.

“Art brings all of us together,” said Hogan, who is an artist herself. “It doesn’t matter your background because it’s something we can all appreciate together.”

Renaissance Academy was an ideal choice for the mural series because it’s part of the University of Maryland School of Social Work-led program Promise Heights. Promise Heights is a cradle-to-college-and-career approach aimed at closing the opportunity gap in the West Baltimore community of Upton/Druid Heights.

“Along with five schools and 20 partners, Promise Heights will build a pipeline of much-needed wraparound services for students, including early childhood development, social-emotional support, academic support, and college and career coaching, to ensure pathways out of poverty for youth and their families,” explained Bronwyn Mayden, MSW, executive director of Promise Heights. “We are excited to have the UMB Council for the Arts & Culture sponsor this mural at Renaissance Academy.”

Members of the council hope that this mural will become yet another pillar of support for the students at Renaissance Academy and that it will demonstrate the power that art can have on the mind and body.

“This mural series is all part of UMB’s holistic view that the arts can help people heal and work through crisis and trauma. It’s also the perfect way to show that the arts go hand-in-hand with fields like medicine, nursing, and social work,” said Jennifer B. Litchman, MA, senior vice president for external affairs and chair of the Council for the Arts & Culture alongside the First Lady.

The council had been working in tandem with a group of students at Renaissance Academy for the past year to determine the theme and artwork of the mural. Finally, they were able to narrow it down to three art concepts, and the school got to vote on which one it wanted to see in its hallway.

The artist behind the mural, Candace Brush, really took Woodhouse’s sentiment to heart. Before sketching out a design, Brush talked to the students about what they wanted to see and what would best represent them in the mural. Through those conversations, Brush was hit with a stroke of inspiration.

“They love music and dancing, so I felt that showing people having fun and dancing with the bright colors would really suit them the best,” explains Brush. “I love working with the students, and this extra touch of care and detail will really help to make this mural a part of them and drive their appreciation that much more.”

The appreciation showed through each of the students who were thrilled to see the mural finally completed. To them, the work of art is more than just color schemes and patterns. It represents companionship, commitment, friendship, and fun. It also symbolizes their own journeys through high school.

“In ninth grade we come into school with a blank canvas,” explained Kevin Flemming, a junior who helped to complete the mural. “Hopefully, by the time we reach our 12th grade year and graduation, we will have gained some ideas of who we are and what we want to become. In theory, we’ll be a step closer to completing our own personal murals.”

Woodhouse hopes that her students take away another lesson from this mural. She hopes they can have a new appreciation for art and how it can evoke thoughtfulness and inspire a new perspective on learning.

“We don’t have to just do critical thinking through books,” she said. “We can do critical thinking through art and social interaction and then use those skill sets to push our academics. For me, Renaissance means rebirth and getting a fresh start, and with this art project we can all see that we’re continuing to move forward as a school. That’s what makes me so happy to be here.”

During the mural unveiling, UMB President Jay A. Perman, MD, announced another way that Renaissance Academy is moving forward. Through Promise Heights and a grant from the U.S. Department of Education, UMB has been able to sponsor the first class of Renaissance Academy students who will be trained and certified as phlebotomists. Perman explained that an instructor from Baltimore City Community College has been teaching the course at the high school. Then, in June, the students will be able to do their clinical practice at the University of Maryland Medical Center.

“We don’t plan to stop with phlebotomy certifications,” said Perman. “We look at this as a steppingstone into many other health care professions, and I plan on seeing a lot of Renaissance students at UMB one day.”