A panel of scholars in the field of financial well-being and capacity-building appeared at an event sponsored by OneMain Financial and presented by the University of Maryland School of Social Work (SSW).

The panel discussed spending, saving, and other aspects of monetary decision-making after participants were welcomed by Sheldon K. Caplis, MBA, director, community relations, at OneMain Financial. A contribution by the company made possible a documentary presentation and the panel discussion.

Held April 27, the event was arranged by the SSW’s Financial Social Work Initiative (FSWI) and supported by the Office of Financial Education and Wellness at the University of Maryland, Baltimore (UMB). 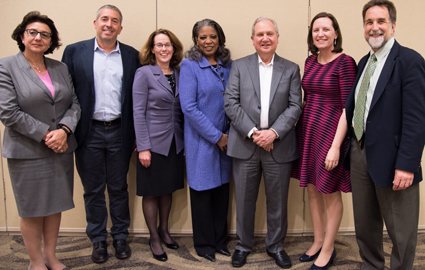 The program began with the showing of the documentary, Thinking Money: The Psychology Behind Our Best and Worst Financial Decisions, produced by Maryland Public Television. Three members of the panel were among the experts interviewed in the documentary.

The film and the panel discussion allowed the audience to gain insights on how the market and the human brain affect the way people handle or mishandle their finances. In the wake of the Great Recession, panelists noted, a misstep can hold severe consequences for those living paycheck to paycheck or without adequate resources.

Try as they might, for some people, “there’s more month than there is money,” said Gerri Walsh, JD, president of the FINRA Investor Education Foundation. FINRA is a registered trademark of the Financial Industry Regulatory Authority, Inc.

Walsh is among the panelists who also appeared in the documentary. Others featured onscreen were Annamarie Lusardi, PhD, academic director of the Global Financial Literacy Excellence Center and Denit Trust Chair of Economics and Accountancy at the George Washington University School of Business; and Eldar Shafir, PhD, the William Stewart Tod Professor of Psychology and Public Affairs at Princeton University.

Lusardi shared some new findings about women, who around the world are disproportionally more likely than men to say, “I do not know.”

"It's a fantastic result," said Lusardi, "because they know they do not know," making women ideal financial decision-makers and ideal targets for financial education.

Shafir described research showing the load that is borne by people trying to manage with insufficient funds. “They devote enormous amounts of their mental resources to that juggling, that challenge,” he said, leaving fewer to deal with other things in their lives.

They were joined in the discussion by Robin McKinney, MSW '01, a clinical instructor at the SSW and director of the Maryland CASH Campaign, and by television anchor and correspondent Karen Gibbs, who was the moderator.

“We’re seeing a lot of collateral loans particularly among older folks selling things in their house that they want to get back,” McKinney said. Making reference to the documentary's depiction of pawnshops, she noted that many people find they can’t afford to redeem their belongings. “That’s the challenge of pawn,” she said. “You’re really stripping these assets.”

The event was planned during April to mark National Financial Literacy Month and to help further an effort to meet the “Grand Challenges” adopted earlier this year by the American Academy of Social Work and Social Welfare. Social work educators, researchers, and practitioners aspire within a decade to meet the 12 challenges, including one to “build financial capability for all.”

SSW Dean Richard P. Barth, PhD, MSW, who is president of the academy, and Jodi Jacobson Frey, PhD '04, MSW '98, LCSW-C, associate professor at the SSW and chair of the FSWI, spoke at the event in addition to Caplis.

The SSW offered continuing education credits for those who registered through its Office of Continuing Professional Education, and several alumni who were in attendance participated in a lively question-and-answer session with members of the panel. A reception followed.