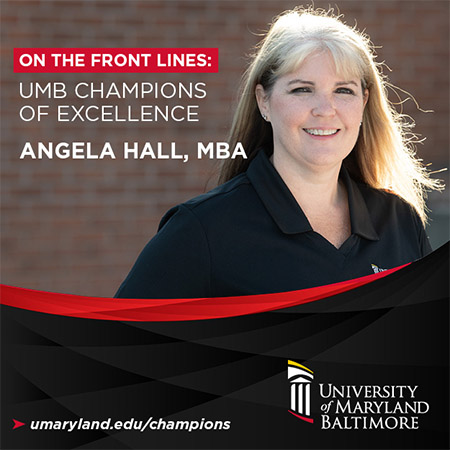 Always at Your Service

Angela Hall, MBA, director of the University of Maryland, Baltimore’s (UMB) Office of Parking and Transportation Services (PTS), has taken customer service to a new level during the COVID-19 pandemic, even moving cashier operations into her own office when the SMC Campus Center closed in the spring.

Hall, who was initially one of three office employees in PTS who continued to work on campus, had to process a large number of student refunds when many classes moved online and some garages were closed.

Hall “excelled at addressing the high demand for student refunds with a quick response and continued follow-up,” said her supervisor, Robert Milner, MS, executive director, Auxiliary Services. “She redeveloped the PTS cashier’s office to accommodate the various onboarding schedules during the pandemic, while limiting the number of staff on campus.”

Hall, who has been named a UMB Champion of Excellence for her efforts, said, “Running a big cashier’s office out of my little office was definitely interesting for several months. I thank everyone on campus for the patience they had with us.

“It really was shocking because I don’t think those of us in parking knew how much the pandemic was going to impact us and for how long.”

In addition to the cashier’s office, Hall manages customer service, auditing, the parking contractor, and the managers who oversee that contract. She was promoted from assistant director over the summer.

“She has taken on each role in the PTS department during this crisis to meet the needs of the community and ensure that all essential personnel from UMB and others have the necessary parking,” Milner said in nominating Hall for the honor.

He also praised Hall for responding quickly to financial requests. “She constantly concentrates on new avenues of saving the University money,” he said.

Hall was among those who made decisions about which garages would be open and closed at the start of the pandemic.

“We took the data analysis, and the decision was made, after two to three weeks of seeing who was on campus, to close some garages and allow people to park where they needed to park,” she said. “If you had to come on campus and your garage was not open, you could park in the next-closest garage and you didn’t have to worry about what your permit says.

“We had to make those difficult decisions on which garages to close. Then we came up with a plan immediately about how to reopen once we started seeing garages get to a certain level.”

Hall said her motivation during the pandemic has been her staff, whom she praised for their eagerness to return to work, as well as employees, students, visitors, and patients who use the parking facilities. She has worked to keep things as normal as possible for her customers.

“No one should worry about parking. Employees should be able to come in, park their car, do their job, and leave for the day,” Hall said. “I try to make sure that parking is not stressful.”

Back to Main Champions of Excellence page