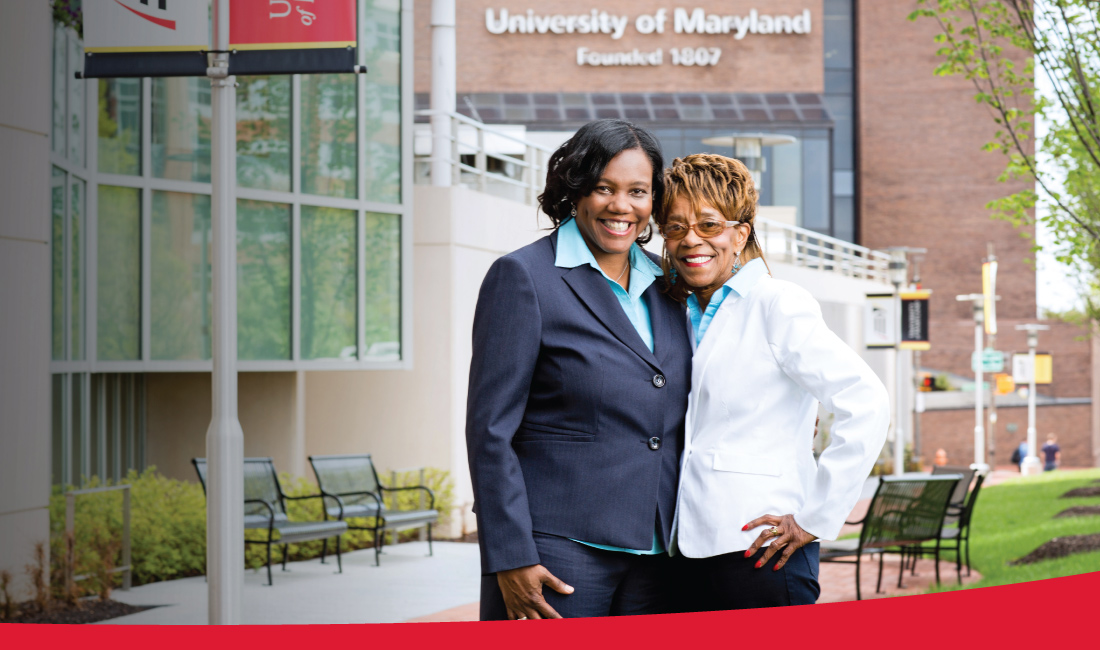 Yolanda Ogbolu, PhD, RN, CRNP, grew up two blocks from the University of Maryland, Baltimore (UMB) in what she calls “an under-resourced and impoverished neighborhood.” But that poverty didn’t limit her ambitions.

“As a kid, I had this vision that I would go to Africa and take care of children,” Ogbolu says. “Given my situation, it seemed like a pretty far-fetched dream.”

Turns out, it wasn’t that far-fetched after all. Ogbolu, assistant professor at the University of Maryland School of Nursing (SON) and deputy director of its Office of Global Health, has local and global impact―instructing students in the SON; working with high school students in the same Baltimore neighborhoods where she grew up; and developing nurse leaders in Africa, where she designs curricula and training to improve patient care and newborn survival.

Ogbolu serves as a research mentor to nurses in Nigeria and has developed partnerships with four nursing universities in West Africa. Her close ties to West African health professionals made another recent effort a labor of love. Ogbolu has helped establish―with University of Maryland School of Medicine associate professor James Campbell, MD, MS, and others across UMB―an Ebola Information Network. Through the network, University faculty, departments, and schools share information about their Ebola-related work and identify opportunities for collaboration.

Ogbolu has yet another tie to Africa. Her husband, Michael, is Nigerian. They met not on one of her foreign missions, but at Mercy Medical Center in Baltimore. “I was a nurse practitioner in the neonatal intensive care unit, and Michael came to work at Mercy after winning a lottery visa.” Michael, PhD, is now an assistant professor at Howard University; his research focuses on African-American entrepreneurship.

Together with their four children, they make annual monthlong visits to Africa, flying 13 hours each way with a stopover in Europe. Even when the trip is intended as a family visit, Ogbolu reserves at least 10 days for work―training health professionals (some of her earliest international work was teaching neonatal resuscitation in northwestern Nigeria); presenting her research findings; helping doctoral students with their dissertations; building relationship with new partners and faithfully following up with existing ones. Ogbolu seems surprised that some would see these trips as too big a sacrifice to make.

“How can we ignore health outcomes?” she says. “The burden of disease is so great. When I have the opportunity to help, especially newborns, I have been ready, given that they’re the most vulnerable members of the population. Infant mortality here in the U.S. is about 6 [deaths] per 1,000 live births. In Nigeria, the infant death rate is 15 times higher, now at 90, after being 106 several years ago. Working alongside my colleagues in Nigeria to expand nurse capacity and improve newborn outcomes is part of being a moral global citizen. It’s important work.”

It’s the kind of important work Ogbolu has devoted herself to for two decades, working across state and national borders to care for newborns and address issues of health disparities and cultural competency, where her expertise is in demand. Ogbolu served on the Maryland Infant Mortality Epidemiology Work Group and chaired a subcommittee of the Maryland Cultural Competency Work Group. She’s collaborated with the U.S. Department of Health and Human Services’ National Office of Minority Health to develop an educational module on National Standards for Culturally and Linguistically Appropriate Care.

“Whether you’re young or old, black or Latino, English- or non-English speaking, it’s very important that you receive care that is culturally and linguistically appropriate,” she says.

If she’s not in her office, Ogbolu isn’t far from her children. “If children aren’t around me, it feels like something is missing,” she says. “We have to share every minute we can with our children. We’re looking at the next generation of leaders.”

Ogbolu thinks about the next generation of leaders a lot―when nursing students stop by her office or high school students ask for help. Ogbolu admits she has trouble saying no. “It can be an email late at night and I try my best to respond to the urgent issues, because it could be a matter of changing somebody’s life,” she says.

She knows firsthand what a difference one supporter can make. Ogbolu credits her mother― Linda Russell, a former seamstress who’s now an equipment supervisor at the University of Maryland Medical Center―for her success. When Ogbolu and her sisters had a chance to go outside their all-black neighborhood to Francis Scott Key Middle School near Fort McHenry, Russell thought it was a good opportunity for her girls.

“Going to school in South Baltimore was an awakening for me because I had my own biases that I had to break down,” says Ogbolu, who graduated at the top of her class at Key and moved on to Western High School. “It was in this period that I began to realize I was equally gifted.”

Russell’s appreciation of the power of education rubbed off on Ogbolu, an admitted “bookworm” whose favorite place growing up in West Baltimore was the Enoch Pratt Free Library on Cathedral Street.

“Awards and praise are nice, but I believe there is generally something bigger at work,” says Ogbolu. “When Dr. Perman called my mother to that stage, it elevated her in such a beautiful way … for a week she was floating in the sky. I realized the award was also meant to be a blessing to her for her hard work and dedication.”

A blessing like Ogbolu’s work in Baltimore and in Africa.