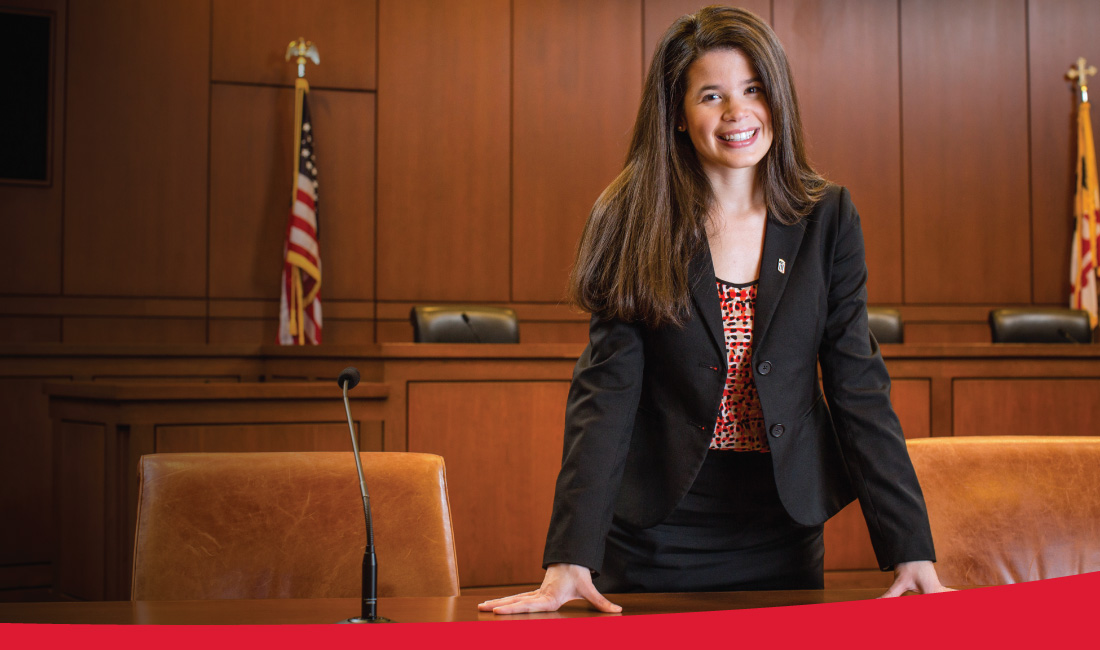 A Passion for Advocacy

Newly minted attorney Wandaly Fernández’s list of accomplishments while a student at the University of Maryland Francis King Carey School of Law is long and impressive. In addition to her outstanding scholarship, the 2014 graduate earned extracurricular honors for her leadership role as a peer advisor and student recruiter. As president of the Maryland Carey Law Class of 2014, Fernández was one of the school’s featured graduation speakers.

“I cannot remember a student whose vision, insight, and commitment to diversity and equality in the profession was more valued by students and faculty alike,” says professor Paula Monopoli, JD, founding director of the law school’s Women, Leadership & Equality Program.

Given her law school accolades, it’s curious that Fernández didn’t set out to be a lawyer. Inspired by her father, she initially aspired to be a pharmacist and studied biology at the University of North Carolina, Chapel Hill. Her interest in law was sparked after taking political science classes, which led to her further interest in the effect of legal policy on health and minority issues.

Fernández says her parents, both immigrants, are her motivation. Her mother is Puerto Rican and her father is from Cuba. “They came to the U.S. and worked so hard to give me the best education possible,” she says. “I feel I owe them. They know I appreciate what they did for me and the sacrifices they made.”

Fernández says she knew she was destined for law when she participated in Mock Trial, an undergraduate program in which students are introduced to the judicial system and prepare for trial. Soon after, Fernández switched career plans. “I found I had a passion for getting into the courtroom and for advocacy,” she reflects. “You have to think on your feet and advocate for your client. If I could do that the rest of my life, it would make me happy.”

When Maryland Carey Law offered to make her a Leadership Scholar, a three-year, merit-based scholarship recognizing excellence in academics and leadership, Fernández headed to Baltimore. “I was captivated by the eager law students and outgoing faculty,” she says. “Plus the school offered so many different programs — such as health law, environmental law, advocacy, and the clinic program.”

Fernández’s prowess in written and oral argument skills, along with her passion for advocacy, flourished while at Maryland Carey Law.  Fernández was a member of the Moot Court Board and captain of the award-winning National Trial Team. She was the manuscripts editor of the law school’s Journal of Health Care Law and Policy, one of the few scholarly journals bridging the legal, public policy, and scientific fields. And Fernández was selected as one of the Women, Leadership & Equality Program’s prestigious Rose Zetzer Fellows to learn professional skills such as negotiation, leadership development, and gender parity issues.

“The University has allowed me to spread my wings,” says Fernández. “I’ve grown a lot as a person and learned not only about legal issues, but how the law affects people.”

As a new associate with Epstein Becker and Green in Washington, D.C., a law firm specializing in health law, Fernández is determined to find time to do pro bono work for the Latino community. And she harbors a secret wish: to one day argue a case before the United States Supreme Court. Given Fernández’s already impressive list of accomplishments, her wish may indeed come true.