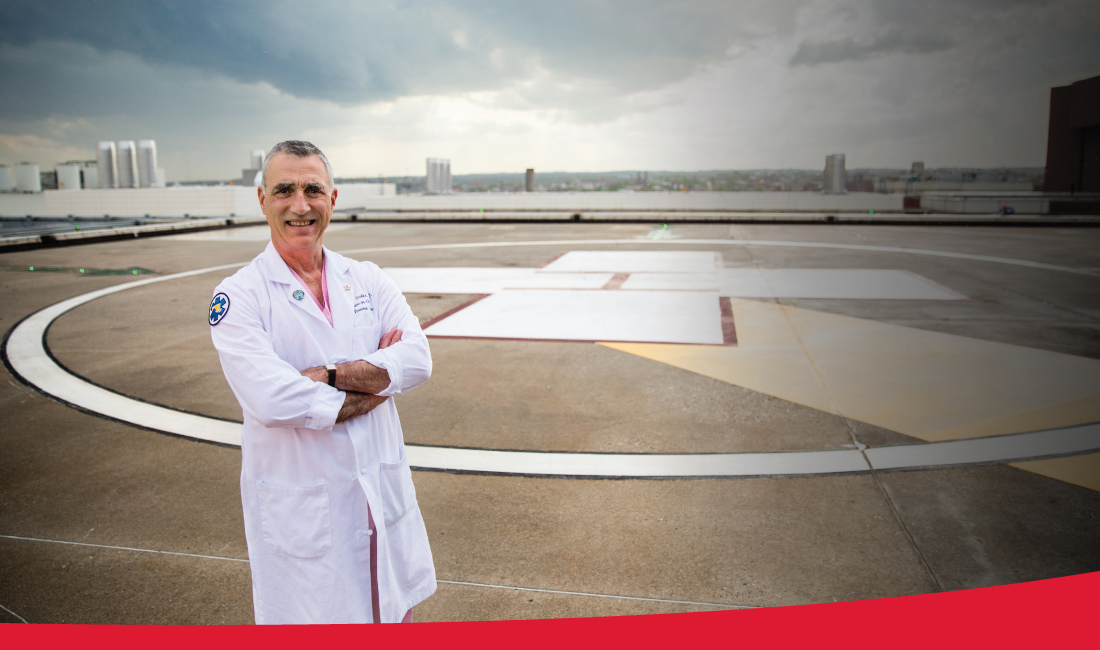 When Life Is on the Line

Injury kills one person every three minutes in the U.S. It’s the leading cause of death for Americans under 45. And when life is on the line in Maryland, the person most likely to save it is Thomas Scalea, MD, FACS, physician-in-chief at the world’s most advanced trauma center.

Scalea leads a team of nearly 500 physicians, nurses, technicians, and staff at the University of Maryland R Adams Cowley Shock Trauma Center. They serve more than 8,000 critically injured patients each year. Ninety-seven percent of them survive.

More than 50 years ago, Shock Trauma’s founder, R Adams Cowley, MD, coined the term “the golden hour,” describing the critical period of time during which treatment of traumatically injured patients has the highest likelihood of preventing death. These golden hours happen 24/7 at Shock Trauma―the first and busiest trauma center in the nation―and Scalea describes the trauma surgeon as the person choreographing “a seemingly chaotic ballet.”

Despite the apparent chaos, Scalea says clinical care at Shock Trauma is actually “streamlined, focused, and precise,” as the team treats not only multiple patients at a time, but often multiple trauma sites on each patient. The team has to be able to spring into action at a moment’s notice, and expand and contract resources to serve the relentless flow of patients suffering life-threatening injuries. “Nurses, technical support personnel, and physicians from several different disciplines must be able to evaluate and treat simultaneously,” says Scalea.

To call the pace “hectic” is an understatement. “The trauma surgeon must be a primary care physician and an intensivist at the same time,” he says. He or she must be able to perform complex surgical procedures in all areas of the body. “Subspecialty consultation,” Scalea adds, “would almost always take too long.”

Sixty minutes―the golden hour―isn’t a lot of time. Fortunately, Scalea says, “the entire state can get to our roof in about 50 minutes with decent weather.” The roof is where the helicopters land, and where you’ll often find Scalea in his pink scrubs, waiting for the critically injured.

Shock Trauma can accept four air medical transport patients at a time. A new helicopter landing pad added in 2013 can hold heavier state helicopters―or Marine One, carrying the U.S. president. As it turns out, that’s important; if the president is injured in the state of Maryland, the Maryland response is that the president is treated at Shock Trauma.

Of course, injury is impartial, affecting people of all ages, races, incomes, and backgrounds. And everyone gets the same exceptional level of care at Shock Trauma, Scalea says.

The number of people receiving that care is extraordinary. An average U.S. trauma center serves around 3,000 patients a year. The R Adams Cowley Shock Trauma Center more than doubles that number. In part, that’s because Maryland’s Shock Trauma Center is the largest facility of its kind in the country. For years, Shock Trauma operated at more than twice its capacity, making room for nearly 8,000 patients each year in a facility designed to care for 3,500. But a $160 million Critical Care Tower, completed in 2013, added 140,000 square feet of space, including 64 new patient rooms and four new operating rooms.

Another reason for the large number of patients served has to do with treatment protocols Scalea has implemented since becoming physician-in-chief in 1997. Daily discharge planning rounds for all patients, together with streamlined administrative procedures, have reduced the average length of stay by 15 percent. That saves costs, but it also allows Shock Trauma to treat more people. Indeed, about 40 percent more patients are served each year than were served prior to Scalea’s appointment.

And then there’s Scalea’s policy to admit any patient who would be best served by Shock Trauma’s expertise. This no-refusal policy means Scalea, himself, is a round-the-clock fixture at Shock Trauma, where he works 100-plus-hour weeks. “I really care about what I do in all its facets,” Scalea says. “It’s why I don’t feel put upon to work as much as I do. What could be better than doing this?”

“Doing this” involves taking night calls, performing more than 600 surgeries each year, conducting pioneering research in trauma care, and directing the Program in Trauma at the University of Maryland School of Medicine, where he serves as the Francis X. Kelly Distinguished Professor of Trauma Surgery. The program is the only multidisciplinary dedicated physician group practice in the U.S. that cares for injury; virtually all clinical practice takes place at Shock Trauma.

His work also involves teaching others how to care for the critically injured, including those doing so on the battlefield, where shock and trauma are the norm. Shock Trauma physicians, nurses, and technicians have trained thousands of U.S. Air Force personnel in trauma care. Scalea has gone into the war zones himself―into Iraq and Afghanistan and Kuwait―to see how well the training works.

In a way, Scalea’s training of military medical personnel gets back to Shock Trauma’s roots. R. Adams Cowley began developing his ideas about rapid treatment for seriously injured patients while serving as a U.S. Army surgeon in Europe just after World War II. Dr. Cowley called shock “a momentary pause in the act of death,” a process that once set in motion was irreversible. His goal was to make it reversible.

That’s Thomas Scalea’s goal as well. To stop death. To reverse it. “I absolutely believe I’m saving that person’s life, even right up until they die. We believe we can do the impossible, and sometimes we do.”