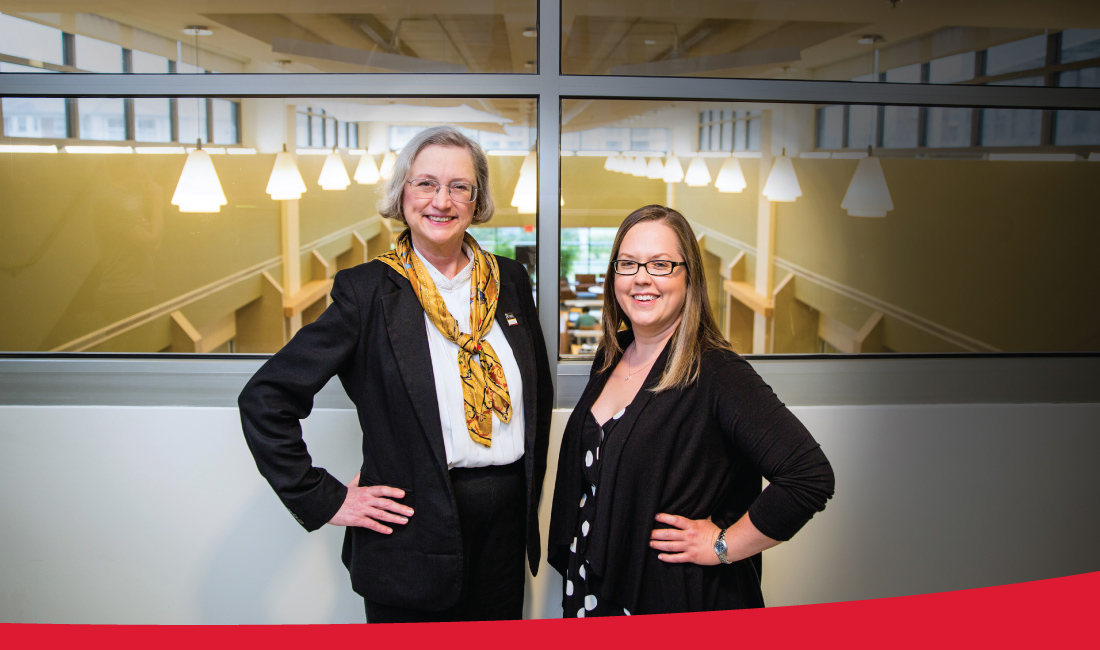 Nursing a Passion for Students

“Both of us get extreme satisfaction watching our students cross that stage,” says Dever, MPS, manager of the University of Maryland School of Nursing (UMSON) program at the Universities at Shady Grove (USG). “It’s the best feeling because you’ve been with them for two years. You met them before they even applied and talked to them during the application process. You see them through four semesters. They don’t know what to expect, but we know what they’ll go through.”

Neelley, the program’s administrative assistant, adds with a laugh, “It’s like being a mother — multiple times.”

Dever and Neelley are the mainstays of USG’s nursing program, which has gained prominence as demand grows for those who hold a Bachelor of Science in Nursing (BSN) degree. Further, the national changes in health care delivery promise to widen the roles of these nurses and, beyond that, the ones who go on to attain advanced degrees. Even some of the University of Maryland, Baltimore’s (UMB) higher-level courses are being offered at USG’s campus in Rockville.

But the majority of Dever’s and Neelley’s charges are students who are earning either the traditional BSN or who are in a program offering an “RN-to-BSN” degree, which is for registered nurses who hold associate degrees.

“It used to be that students would get an associate’s degree. But what they’re finding out now is that when they get out of school, the demand for a BSN is so much higher that they’re coming back to school almost immediately — and they are coming back to UMB,” says Dever.

The participants in the RN-to-BSN degree program can finish their studies faster than the traditional BSN students, who usually spend two years at USG after having completed prerequisites or the first couple of undergraduate years elsewhere.

Dever says an average of 175 to 200 students are enrolled each semester. Some are straight out of high school and Montgomery College, while others are second- and third-career students. Dever says the average age is around 27.

What the pair finds is a student body that is highly motivated and “not just trying it out,” says Dever. “Some of them always wanted to be nurses but someone way back when talked them out of it. Other folks have had a close family member helped in a hospital and realize, ‘I really want to do this.’ So they change direction and come to nursing.”

In their roles at USG, Dever says she and Neelley “wear a lot of hats.” Both provide administrative support to the faculty of 15 and assistant dean Rebecca Wiseman, PhD, RN. They also work closely together in recruitment and public relations, admissions support, website administration, and coordination of paperwork between students and UMSON.

Perhaps most importantly, they help students weather the storms of nursing school, as well as facilitate student-instructor communication.

“We’re a safe place to come to because we don’t give them grades,” Dever says. “They can come to us and dissolve into tears sometimes, or just be angry or whatever. We listen and talk to them.”

Since neither has a nursing background, Neelley says, they offer advice on being a successful student and eventually getting to graduation. “We know they can do it, they just need to be reminded.”

Dever, who lives in Rockville and previously worked in the retail and catering fields, came to Shady Grove nearly a decade ago. Neelley has been there five years. Both admire USG’s cutting-edge concept and collaborative atmosphere. USG, a part of the University System of Maryland, serves approximately 4,000 students by offering career-oriented higher education courses through nine collaborating Maryland degree-granting institutions, including UMB.

Neelley and her family live on 5 ½ acres in Hedgesville, W.Va., where they have sheep and chickens and she finds time for a hobby — knitting. She commutes roughly two hours to USG because, she says, “I love this campus and what we do here.”