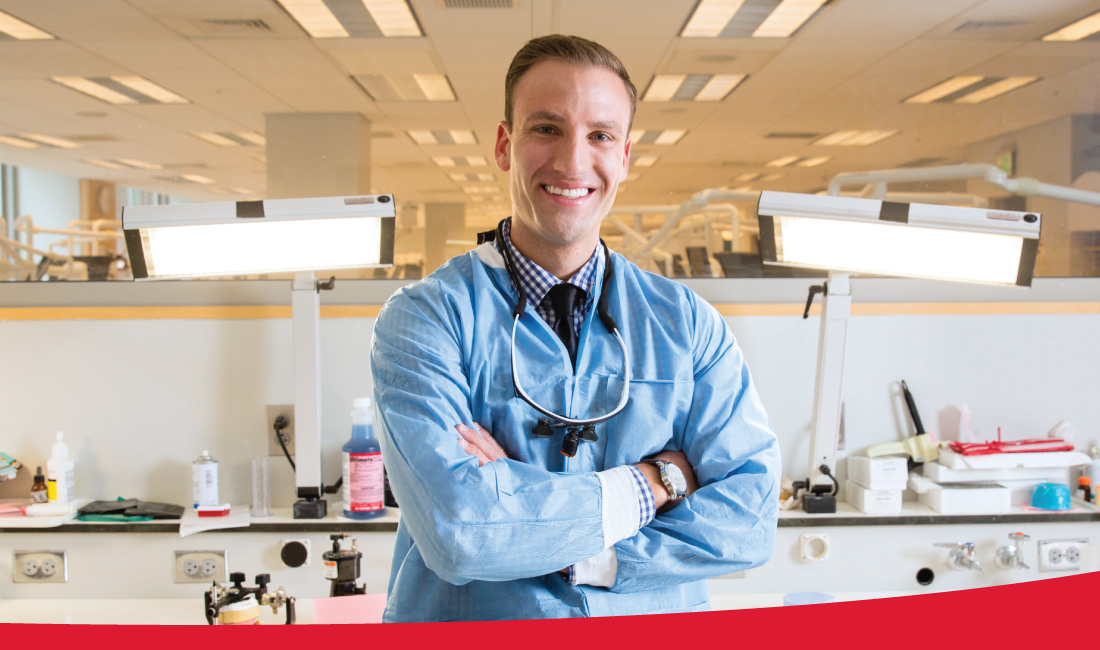 He’s a Step Ahead

At 4 years old, Rob Slauch was running through his home in Collegeville, Pa., when he tripped and fell face-first into a coffee table and knocked out most of his baby teeth. He was rushed to the office of Jay Goldsleger, DDS, a pediatric dentist and family friend. “It wasn’t scary for me, like it would’ve been for most kids, because I knew [Dr. Jay] and his office,” Slauch says.

That experience ― and the resulting years of intensive care he required ― marked Slauch’s first foray into a dental career. “The accident itself wasn’t that big a deal to me,” he recalls. “But it was the start of learning about what dentistry is. That was the catalyst.”

Now 25, Slauch is a third-year student at the University of Maryland School of Dentistry (SOD). He’s also a published author, having written three papers while interning for noted Philadelphia prosthodontist Thomas J. Balshi, DDS, PhD, FACP ― an internship he took before enrolling in dental school. Those papers have appeared in Implant Dentistry, the Journal of Prosthodontics, and the International Journal of Oral & Maxillofacial Implants. Endorsing the value of Slauch’s research, the editors of the Journal of Prosthodontics recently selected his paper for inclusion in a special virtual issue highlighting 10 studies published over the last three years that provide a global perspective on dental implant research.

Clearly it was a productive “year off” between college and graduate school, a gap that allowed Slauch to immerse himself in the profession and come to the dental program with an enviable base of general knowledge and a leg up when considering a specialty in prosthodontics, which deals in the aesthetic restoration and replacement of teeth.

Slauch’s research career certainly hasn’t slackened since enrolling in the SOD. He has presented his research at the last two annual meetings of the American College of Prosthodontists (ACP), taking first-place honors in predoctoral student research at last year’s meeting. His research concerns dental implant stability during the first months of placement and whether factors such as implant orientation, patient gender, and bone quality affect stability patterns. He’s also working on a new study with Balshi, examining the survival rates of implants placed with the assistance of a computer-generated surgical template. Slauch will present results of the study at the ACP annual meeting this fall.

His early encounter with a coffee table notwithstanding, Slauch really decided to become a dentist while doing his undergraduate work at Penn State. “I like the idea that you’re providing a service that can drastically change someone’s life,” he says. “Some people can’t eat well because of their teeth, or they’re too embarrassed to smile. So to help people leave the office … [feeling] better about themselves, that’s what it’s all about.”

This compassion drives Slauch’s philanthropic efforts as well. As treasurer for the Class of 2016, Slauch helps organize fundraisers for the Faraja Primary School for Physically Handicapped Children in Tanzania. The money raised goes toward dental screenings, cleanings, and basic restorative care for the school’s students. Additional donations of oral health care supplies are especially important in a country with no fluoridated water and poor access to oral care providers.

Even to Slauch, enormously accomplished so early in his academic career, the rigor of dental school at the University of Maryland, Baltimore is surprising. “You go in knowing it’s not an easy journey, but you have no free time at all,” he says. “Your life is on hold for four years, so you learn how to balance your time. But I love the challenge and learning something new every day.”

In the slim spare time he does find, Slauch loves playing baseball and golf and making music. In fact, he plays piano in a band populated by fellow SOD students. They call themselves The Narwhals, after a rare species of whale known for its long tusk jutting out from a canine tooth. (It’s an unsightly dental dilemma, but the whales get along just fine.)

Of course, becoming a standout dentist is Slauch’s primary focus. “I believe being actively involved in research, even as a student, is one of my duties as a future dental professional,” he says. “It will keep me progressive and allow me to treat patients to the best of my ability.”