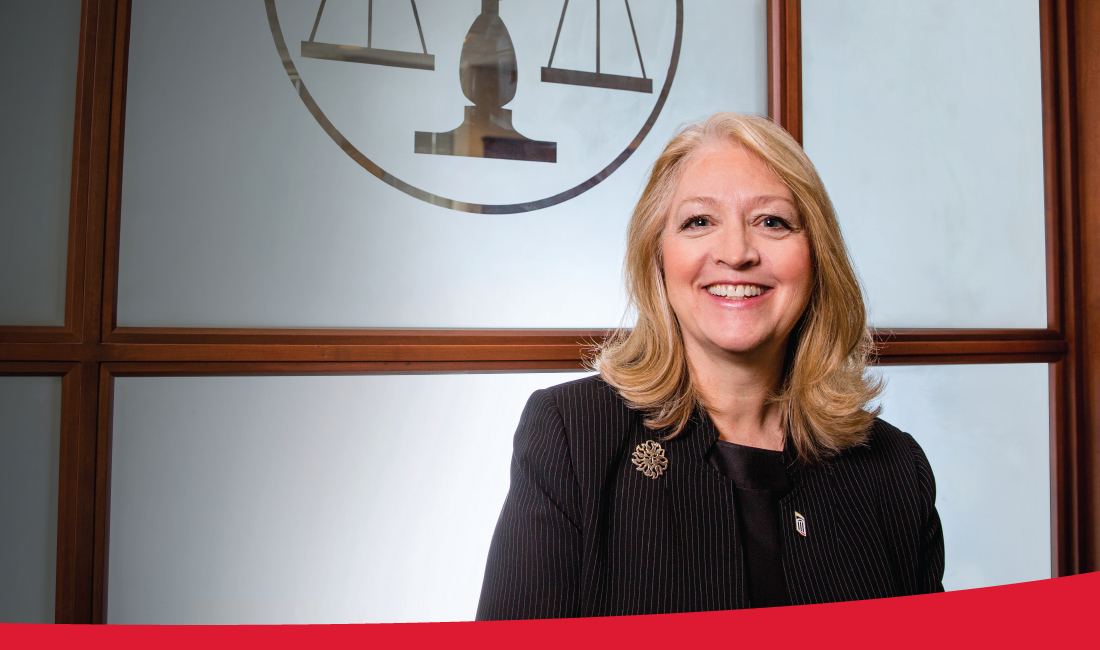 Becoming a law professor was the furthest thing from Paula Monopoli’s mind 30 years ago when she walked into her first class as a law student. The professor was a man. And with only one female professor on the full-time faculty, Monopoli had few role models.

“Even though my father was an academic, it had never occurred to me that I could or should teach law,” says Monopoli, JD, a tenured professor of law at the University of Maryland Francis King Carey School of Law. “But today my students never question the fact that a woman’s place is in the law school classroom—as a student and as a professor.”

A woman’s place is also in law’s highest professional ranks. That’s the point Monopoli set out to prove 11 years ago, when she established the Women, Leadership & Equality Program at the Carey School of Law. The program―the first and only one of its kind in an American law school―examines the barriers that keep women from the most powerful positions in law and gives them skills, strategies, and confidence to fill these top jobs.

So Monopoli, a nationally recognized scholar in inheritance and gender law and an elected member of the American Law Institute, launched the Women, Leadership & Equality Program in 2003 with a $250,000 grant from the Marjorie Cook Foundation. Eleven years later, the program is flourishing, attracting students―both women and men―who call the curricular combination of theory, application, and experience “life-changing.”

Through the program’s Rose Zetzer Fellowship―named for the first woman admitted to the Maryland Bar Association―students contribute to cutting-edge scholarship in gender and leadership issues. They apply theory in law, political science, philosophy, and business, and gain practical experience through externships with organizations dealing in women’s policy issues―like the House of Ruth, CASA of Maryland, the National Women’s Law Center, and the International Association of Women Judges

“One of the goals was to bring to today’s law students the lessons learned by the first generation of women to enter the profession in large numbers,” says Monopoli. Law schools teach students how to think like lawyers, she says, but teach them little about the environments in which they’ll use those analytical skills. The Women, Leadership & Equality Program bridges that gap by incorporating scholarship in organizational behavior and dynamics, typically found in MBA programs but rarely in the law school curriculum.

The fellows, numbering about 100 since the program began, learn how advocate for themselves, how to set goals, how to “read” and navigate the law firm culture, how to negotiate, network, and lead. These skills are essential to advancing the next phase of gender equality in the practice of law―not parity in the number of women entering the profession but in the number reaching positions of real power.

A graduate of Yale College and the University of Virginia School of Law, Monopoli is a prolific scholar, publishing and presenting extensively in the areas of ethics; trust and estate law; fiduciary duty; and law, gender, and leadership.

And then there’s the teaching, which Monopoli didn’t consider a viable career option all those years ago. Students at the Carey School of Law rave about Monopoli on faculty evaluations and have several times named her Outstanding Professor of the Year, most recently in 2013―the same year, in fact, that she was named Founders Week Teacher of the Year by the University of Maryland, Baltimore.

Monopoli is known for going the extra mile for her students. She invites prospective students to sit in on classes; she holds brown bag lunches for students; she serves as thesis supervisor for nearly a dozen students each year. “I recall an in-class exercise she assigned in a first-year property course that had 80 students,” says Andrew Ahye, MS, JD ’14. “Everyone received individualized, written feedback and were invited to sign up for individual, 30-minute consultations. I’ve never encountered a faculty member who’s openly placed a higher premium on each student’s success.”

It’s a good measure of progress that Monopoli, once a law student with virtually no female professors to guide her, is now part of a law school where more than half the faculty members are women. The measures of progress ahead of her now are just as important: how many women seek leadership positions in law, and how many lawyers in positions of influence actively promote them into these roles.