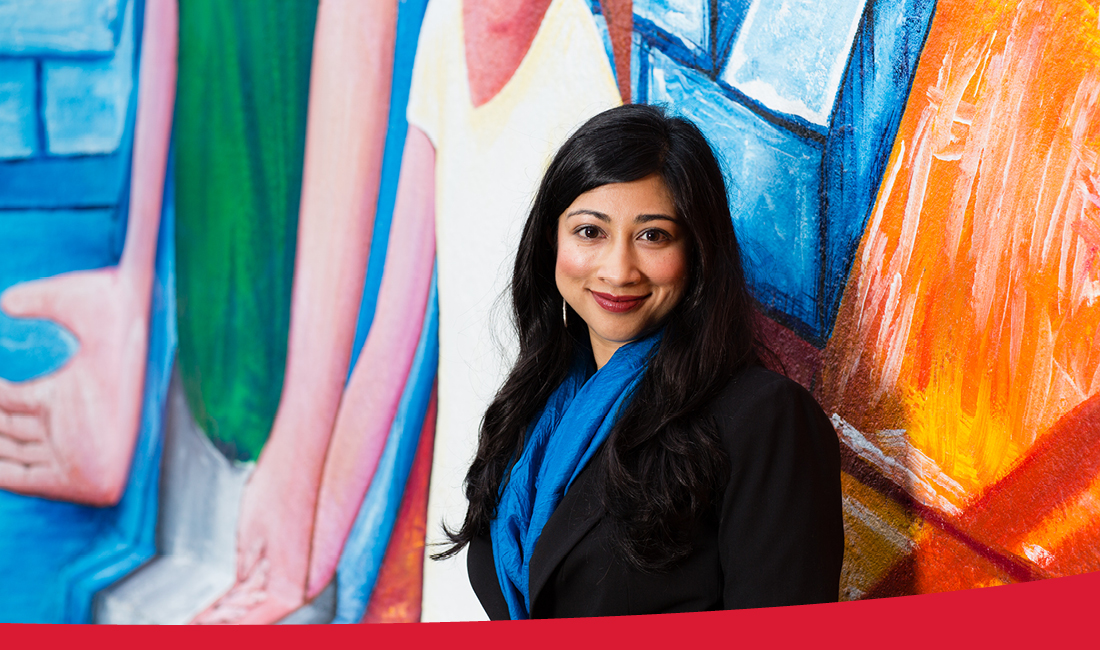 Nalini Negi’s, PhD, MSW, passion for social justice and global perspective was born out of a childhood spent in seven countries across four different continents. These experiences have greatly informed her work as an associate professor at the University of Maryland School of Social Work.

There was the time her family was living in Romania, during the brutal communist regime of Nicolae Ceausescu, and her father — an Indian Foreign Service diplomat — snapped a few pictures to document the long food ration lines. A member of the regime’s secret police came up, snatched the camera, took away the film, and returned the empty camera.

“I saw the sense of despair that an authoritarian government can subject people to,” she says.

Negi in her younger years also witnessed Colombia in the 1980s when that country was reeling from rampant drug trafficking, gang wars, kidnappings, and indiscriminate killings. And there was the grinding poverty and sense of hopelessness she saw as a child in Guinea.

“Being exposed to all of those political environments drew me to what I wanted to do,” says Negi, who was born in Japan and considers San Francisco her hometown. “Growing up in those different countries, I had an early realization that policies have an impact on people’s lives.”

At the School of Social Work (SSW), Negi researches the social determinants of psychological and physical health of Latino migrant workers. She received a grant from the National Institutes of Health to examine how Baltimore’s context as a settlement city for new immigrants, as well as individual and migration factors, impact Latino day laborers in the city.

“I’m interested in migration and how these migration experiences impact people,” she says. “I have a passion for social justice, and social work is the only profession that has social justice in its code of ethics.”

In particular, her research focuses on the lives of vulnerable groups within the immigrant Latino community, particularly documented and undocumented day laborers. Often, she finds these people are targeted for crime since they are considered “walking ATMs” by others on the street. Their vulnerability is further heightened by their lack of trust of local authorities, including the police.

Having been recruited by several institutions after obtaining her doctoral degree from the University of Texas at Austin, Negi chose the University of Maryland, Baltimore (UMB) because of the School of Social Work’s stellar reputation. Baltimore also offers an interesting context for Negi’s research as it is a city where the influx of Latinos is fairly recent.

“The community here has been on the rise only for the past decade or so,” she says. “That’s different from Houston or Los Angeles where there are established communities. So there’s an increased level of vulnerability because there is limited built-in support and resources. There’s a dearth of funding for services.”

Also, Negi was drawn by the University’s outreach efforts and initiatives in the city at large. “UMB is really dedicated to the urban environment it’s in,” she says. She also finds “Baltimore is urban, but it has a nice, friendly way about it.”

Negi, who was honored in 2013 by SSW students as Exemplary Faculty Member of the Year, says her teaching philosophy largely is to tap into what students bring to the classroom. “These are not empty vessels,” she says. “So I try to expand on their critical thinking skills and share with them what’s interesting to me. Their experiences should be a starting-off point for getting them interested. You have to challenge them to expect more from themselves.”

An avid reader who lives in Federal Hill, Negi describes her personal interests and professional work as “seamless.”

“I don’t separate my work and my life.”

What inspires her are the stories of the everyday people she encounters in her research. “They go through a lot,” Negi says, “but despite that, they are resilient and do the best for their families. It inspires me to continue to conduct research to inform effective services for this under-served population.”