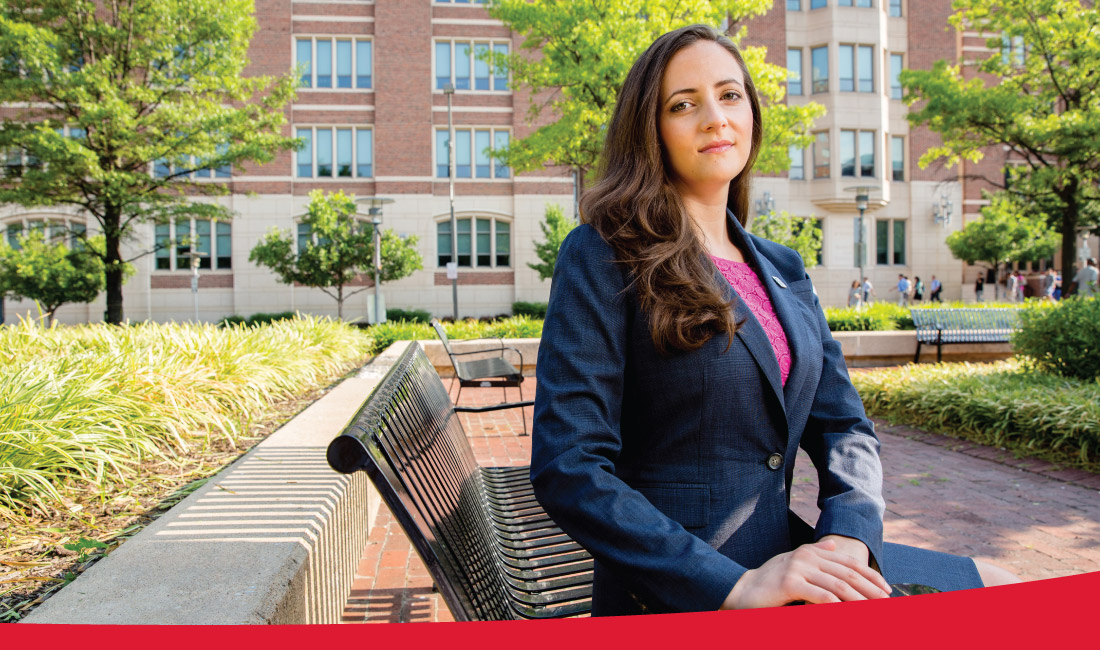 A violent attack in 2004 began Laura Dunn’s decade-long work fighting for victims’ rights and shaped her path to the University of Maryland Francis King Carey School of Law.

Two men, fellow members of her college crew team, sexually assaulted Dunn when she was a freshman at the University of Wisconsin, Madison (UW). Dunn didn’t report the crime for months. When she did, her earlier reluctance to speak out appeared well-founded. Dunn began a protracted―and ultimately unsuccessful―struggle for justice at the campus, criminal, civil, and federal levels. These battles spurred Dunn to take up the cause for others, and she became a nationally recognized advocate for victims of campus sexual assault.

“I was denied justice at every single route, and I followed those routes pretty far,” says Dunn. “That’s how I learned the law, became passionate, and understood what victims need and deserve to navigate the system, because it’s not easy.”

For a while, Dunn wanted to become a litigator and fight for survivors in court. But as she traveled the nation, working with survivors, activists, and policymakers, she realized a law degree would also help her become a more effective advocate and make badly needed changes to institutional policies and federal legislation governing how victims of sexual assault are treated.

One of the things that sold Dunn on the Maryland Carey School of Law was the fact that her interview committee asked about the Title IX complaint she filed against UW―the complaint that had garnered so much media attention―and was clearly impressed by her work. Dunn found that surprising because she says most schools don’t want someone to enroll who’s actually challenged a school’s policies. “But Maryland [Carey School of Law] isn’t about institutional protectionism,” Dunn says. “They’re about the public interest.”

Dunn graduated in 2014, after spending her law school years balancing classes, competing on the National Trial Team and Moot Court Board, and working at a law firm and at the Justice Department―all while continuing her advocacy efforts.

Those efforts included serving as the primary student negotiator on a federal rulemaking committee during her final semester. Dunn’s committee developed proposed regulations for the 2013 Violence Against Women Act Reauthorization, which amends the Clery Act so that schools are required to expand campus crime reporting to include stalking, domestic and dating violence, and sexual assault; to enhance sexual violence prevention and education; and to supply victims’ rights information during campus disciplinary proceedings. Dunn chaired the Stalking Subcommittee.

Dunn is especially proud of a provision she helped get passed―one that extends to victims the right to an advisor of their choice during disciplinary hearings. Many universities, Dunn explains, wanted to limit advisors to someone within the university system. Allowing advisors from outside the system diminishes the likelihood that they’d protect institutional interests above the students they’re serving.

“I introduce her as my hero,” says S. Daniel Carter, director of the 32 National Campus Safety Initiative, who served on the rulemaking committee with Dunn. “In my two-decade career as a victims’ rights and campus safety advocate, having worked with three national organizations focused in these areas, I have never known anyone more dedicated or competent than Ms. Dunn.”

It’s estimated that one in five women is sexually assaulted in college, a number so large that in 2014 President Obama convened the White House Task Force to Protect Students From Sexual Assault. Dunn served in an advisory role to the task force and was a VIP guest of U.S. Vice President Joe Biden when the White House released its first report. Dunn credits the task force’s website, NotAlone.gov, with bringing national attention to SurvJustice [Survjustice.org], the nonprofit she launched during law school.

SurvJustice helps survivors of sexual violence in the way Dunn wishes she had been helped a decade earlier. She founded the organization with a friend who had also been assaulted at UW. The two women want survivors to know that “at the moment of crisis, they can come to us.” A primary goal is to immediately secure for survivors a lawyer who will ensure that their privacy is protected, their rights are asserted, and that they won’t be re-victimized by the system.

Another goal is to empower fellow activists. “There’s a lot of great leadership out there, and it’s spreading across this country,” Dunn says. “I want to invest in their potential.”

While still in law school, Dunn sought out the guidance of professor Paula Monopoli, JD, founding director of the Women, Leadership & Equality Program. One of the goals of the program, says Monopoli, is to “develop both persistence and resilience in the Program Fellows. I couldn’t be prouder of Laura beginning her nonprofit. It’s the next logical step in her commitment to gender equality and justice.”

Dunn now works full time for SurvJustice, headquartered in Washington, DC. Since its founding, the organization has helped more than 100 survivors and filed about 30 federal complaints against noncompliant colleges and universities. Dunn travels a great deal, consulting on campus sexual assault policies and training students and administrators in preventing and responding to gender-based violence. She’s also working with members of the Maryland General Assembly to introduce affirmative consent legislation in spring 2015.

Dunn admits it hasn’t been easy juggling all she’s taken on. “It’s definitely a delicate balance to keep my heart and my passion in it but also make sure I’m not pushing myself to a place where I can’t keep going and recover from seeing some of these tragedies,” she says.

Dunn knows that change comes when there are dedicated people fighting for what’s right. “A measure of justice is given every time I share my story,” she says. “I didn’t get justice, and for that reason I’m now creating justice for others. I hope it leads to real change. I hope it inspires survivors and gives them power.”