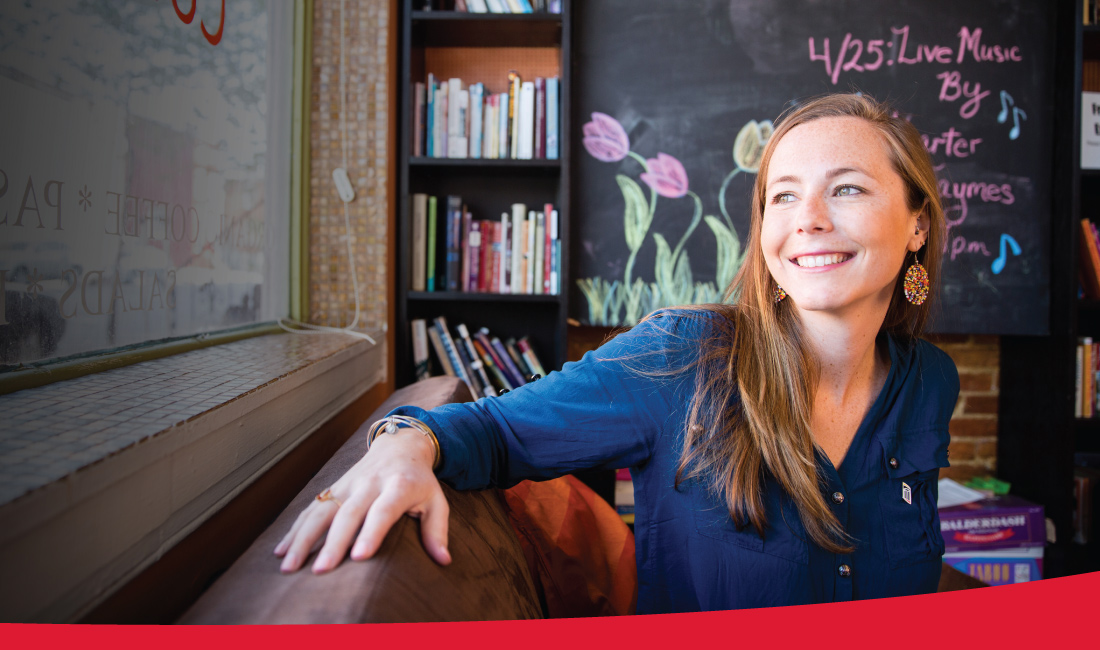 Kristen Hinrichs, MSW, has a passion for her chosen field that was apparent even as an adolescent.

“I have always been involved in the community where I live — whether it was Long Island, N.Y., where I grew up; Lewisburg, Pa., where I went to college; Baltimore for graduate school; or Lexington, Va., where I’m starting my professional career,” says Hinrichs, who graduated from the University of Maryland School of Social Work in 2014. “I did community service projects starting at a young age and always found joy in giving back.”

As a middle school student, Hinrichs volunteered as a “Book Buddy” at her local library and read to younger students every week. In high school, she participated in community cleanups and local charity walks. And in college, she volunteered with the Child Life Team at a local hospital, working with children who were sick and interacting with families who were at a loss for how to cope with their child’s illness.

But it was in South Africa, where she helped create an after-school program for local youth, that she decided that community outreach was her chosen vocation.

“I decided social work was the field for me while studying abroad in South Africa my junior year in college,” says Hinrichs, who also volunteered in Tanzania for six months. “I saw such horrendous poverty but also experienced the vastness of such a beautiful culture.”

She adds: “I knew I wanted to be hands-on. I wanted to develop programs based on need. And I am not sure at what point in my future career this will come into play, but I would love to do more international work.”

While in Baltimore, in recognition of her high standards of academic excellence, Hinrichs received a Research Assistant Scholarship at the SSW that provided unique training and mentoring opportunities. She says her dream is to work with children and, someday, to run her own nonprofit.

Since graduating in May 2014, Hinrichs has begun realizing her dream. As a therapeutic day treatment counselor in an elementary school, she provides support to kids with social and behavioral issues so that they are able to stay in the regular school system.

She’s picked up where she left off in Baltimore. As a graduate student at UMB, she channeled her energy and enthusiasm into several local causes — all focused on empowering youths and strengthening families.

She interned in Upton/Druid Heights with B’more for Healthy Babies, a local nonprofit that helps pregnant and postpartum moms access the services and resources that they need. Hinrichs was active on the University of Maryland, Baltimore campus and within her peer group. The Community Action Network (CAN) was created two years ago to give students an opportunity to get involved in the community where they attend school. Hinrichs helped organize a fundraiser to benefit another local cause, CUPs, which she thinks so highly of she returned to Baltimore in December for its second annual Coffee and a Cause fundraiser.

“CUPs is a nonprofit coffeehouse that provides workforce development and life skills training for at-risk youth,” Hinrichs says. “It was a great experience working in a team of students to organize and throw the first event. I’m proud that CUPs is continuing to expand and have a great impact on the Southwest Baltimore community.”

Hinrich’s continuing impact on the community comes as no surprise to her former instructors.

“Kristen consistently advocates and promotes client rights and social justice issues in vulnerable communities and with vulnerable families both as a social worker and a researcher,” notes Karen Hopkins, PhD, MSW, an associate professor with the School of Social Work. “Additionally, she has demonstrated leadership in influencing and organizing others to ‘step up’ and get involved.”

Hinrichs admits that she embraces contradictions. She’s scared of heights but has gone sky diving and bungee jumping. She loves pizza but hates cheese. Her love for community service, however, comes with no qualifiers. It’s unconditional.

She has advice for others interested in community service.

“I’d like to say I have great time management skills,” Hinrichs says. “But really, I just prioritize what needs to get done and then move on to the next thing,” she says. “It’s all about doing what you can where you are.”