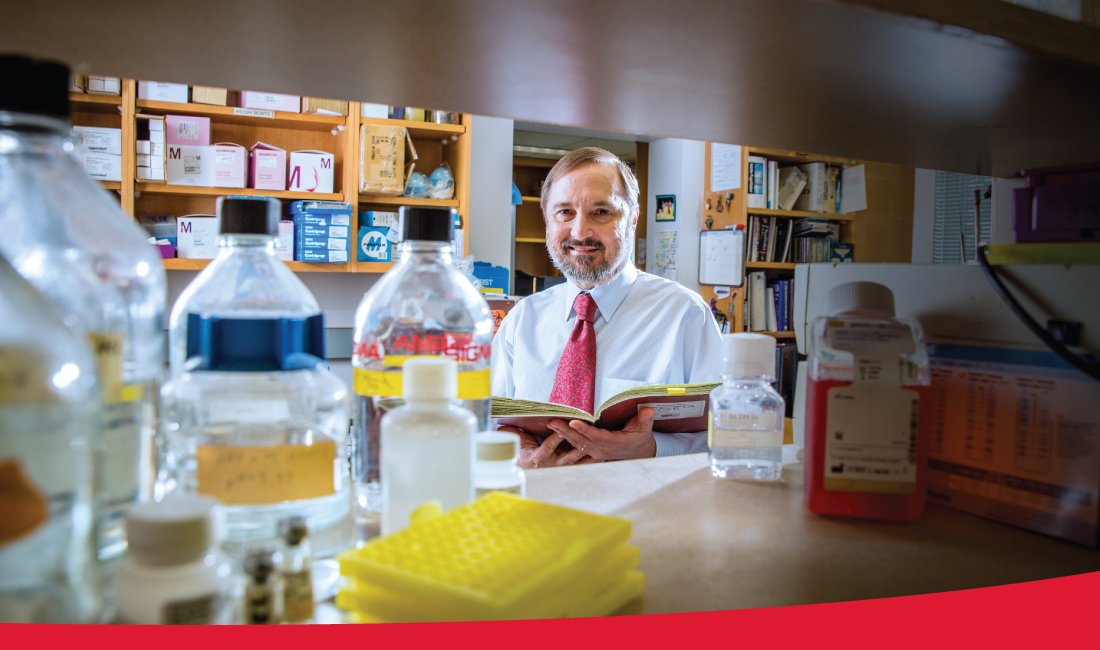 When the Kaper family gets together, conversation often centers on science. James Kaper, PhD, a microbiologist who chairs theUniversity of Maryland School of Medicine’s (SOM) Department of Microbiology and Immunology, pioneered the development of vaccines against bacterial infections affecting some of the world’s most disadvantaged populations.  He has collaborated with his wife, Carol Tacket, MD, an adjunct professor at the SOM, on clinical studies of new vaccines. Their son and daughter are each working on doctoral degrees in the sciences.

“We have lively dinner conversations, and learn from each other,” says Kaper. Not surprisingly, that collaborative mindset is reflected in his work, especially in association with the SOM’s Center for Vaccine Development (CVD). While Kaper and his staff perform laboratory studies involving bacterial genetics, the CVD staff, headed by Myron Levine, MD, DTPH — who recruited Kaper to SOM’s faculty in 1981 — provide clinical testing. The results are often groundbreaking advances in the discovery of vaccines aimed at some of the most debilitating diseases in the world.

Kaper developed the first genetically modified cholera vaccine, made by removing the gene for cholera toxin from the bacteria Vibrio cholerae. Cholera is a deadly health risk in the developing world, where access to clean drinking water is inconsistent, according to the World Health Organization. Individuals who receive this oral vaccine are protected from the disease. Many years of clinical trials and partnership with clinicians and scientists at the CVD led to the approval of the vaccine in several countries. The vaccine is now manufactured by a U.S. company that will submit it to the Food and Drug Administration for approval. The CVD continues to conduct additional rigorous clinical trials to demonstrate the effectiveness of the vaccine against cholera.

“The availability of this vaccine will be an important health benefit to travelers to countries where cholera is a threat and will be valuable in the event of an outbreak of cholera in any part of the world,” Kaper says. “One of the advantages of this vaccine is that it protects against cholera after a single oral dose.”

Kaper’s research focuses on investigating the mechanisms by which bacteria such as Vibrio cholerae and Escherichia coli cause serious, even life-threatening, diarrhea. Explaining the importance of such work, he says, “Cholera, E. coli, and other bacteria are responsible for the deaths of millions of children in countries with poor sanitation and inadequate water supply.” Kaper notes that more than 250,000 cases of dangerous E. coli infections occur annually in this country as a result of unwashed or inadequately cooked produce and meats.

Despite long hours confined to the lab, Kaper finds time to support the community, working with his wife to preserve undeveloped wetlands, and as a lifelong supporter of opera in Baltimore. In fact, Kaper sang with the Baltimore Symphony Chorus for 14 years and more recently performed with the Baltimore Choral Arts Society.

He has also been a mentor at the SOM, training more than 60 PhD students and postdoctoral fellows. In the spring of 2014, Kaper assumed the role of associate dean of academic affairs at the SOM, where he oversees medical and graduate student education, faculty promotion, and a wide range of academic and student activities.

“I am supported by highly competent and experienced people who lead the various activities within the Office of Academic Affairs,” he says. “Working with them to underline the strength of education and discovery for which the School of Medicine is known is a shared responsibility and a gratifying one.”