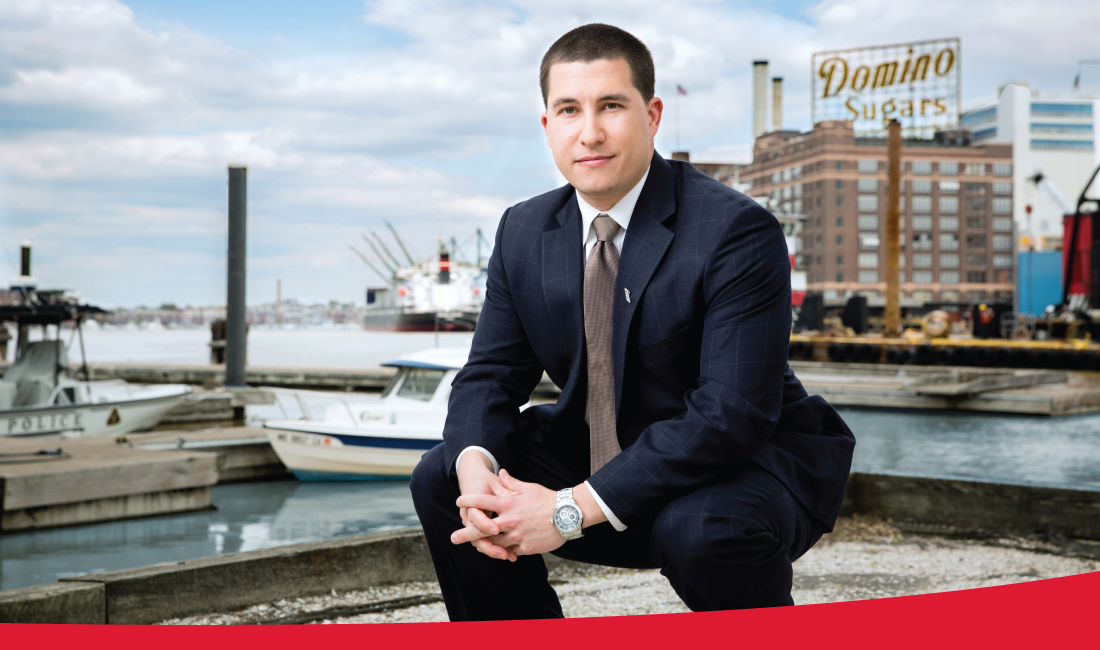 In his three years at the University of Maryland Francis King Carey School of Law, Ian Clark personified the engaged student. He was a veritable whirling dervish of activity, whether it was participating in campus organizations, winning writing awards, or exemplifying the interdisciplinary approach he espoused as a Presidential Fellow at the University of Maryland, Baltimore (UMB).

Through it all, he successfully represented the law school and its highly touted Law & Health Care Program and Alternative Dispute Resolution Team in competitions on the campus and across the country.

Clark earned his JD from the school in May 2014 and has begun his legal career, now working for a small firm in Baltimore after passing the bar. But thoughts of UMB — and the health law and interprofessional education lessons he mastered — are never far from his mind.

The first in his family to pursue graduate education, Clark was initially drawn to psychology and medicine as a career choice, but ultimately discovered that law — and specifically health law — was a perfect fit. “Health care law is such a broad field of practice, but I have yet to find an area of health care that is not intrinsically fascinating,” he says. “It’s both relevant and riveting.”

The fact that Carey’s Law & Health Care Program is ranked No. 2 in the country by U.S.News & World Report (after being No. 1 last year) confirms that Baltimore was a good choice for Clark, an avid traveler who toured 16 law schools before making his decision. “My experiences in the Law & Health Care Program have cemented my resolve to pursue a career in health law,” he says. “In retrospect, I could not be happier about the career choices I've made.”

Time has not dimmed his accomplishments at the law school. Virginia Rowthorn, JD, managing director of the Law & Health Care Program and co-director of the UMB Global Health Interprofessional Council, recalls meeting Clark in 2011, before he had even begun his law school studies, and how eager he was to get involved in campus life. “He became so immersed in school activities,” she says, “and became part of the texture of the health law program.”

In addition to his law school activities, Clark was chosen as a Fellow with the President’s 2012-13 Symposium and White Paper Project, representing the law school in a campuswide, interdisciplinary initiative on how to instill civility as a core instructional value. Earlier, he served on President Jay A. Perman’s task force on interprofessional education, a key aspect of UMB’s 2011-2016 strategic plan.

“Interprofessional education has the primary goal of breaking down silos among the various professional schools,” says Clark. “Interprofessionalism is not just the process of working together, it represents a growing recognition that no man or woman is an island, and no single profession in health care can exist without co-existence.”

Health care law is by nature interdisciplinary, he says, because it brings health care and human services professionals together with lawyers to meet common goals. Clark’s involvement in UMB’s annual Interprofessional Patient Management Competition and field work at the Johns Hopkins Health System General Counsel’s Office have given him “a deep appreciation,” he says, “for the knowledge and skill that each profession brings to the table.”

Clark’s experiential learning activities also took him to Washington, D.C., where he worked with the U.S. Department of Health and Human Services to eliminate health care fraud, waste, and abuse, and to Annapolis to advocate for comprehensive health insurance coverage for individuals with mental health and substance abuse issues. These experiences informed his views on health care policy, such as the belief that measures aimed at reducing the cost of health care must be balanced with initiatives that promote better health outcomes, especially for those with serious physical and mental health conditions.

Clark’s leisure activities also would promote better health outcomes. An outdoorsman who loves to camp and hike, Clark also enjoys playing a variety of sports and running in charity races to stay in shape.

Professionally, he aspires to continue interdisciplinary collaboration in the legal field and to blend his broad array of health law and public service experiences into a well-rounded and successful legal career.

Rowthorn, for one, wouldn’t be surprised to see Clark excel.

“He has so much energy and enthusiasm,” she says. “He’s the type of person that you think is going to run the world one day.”