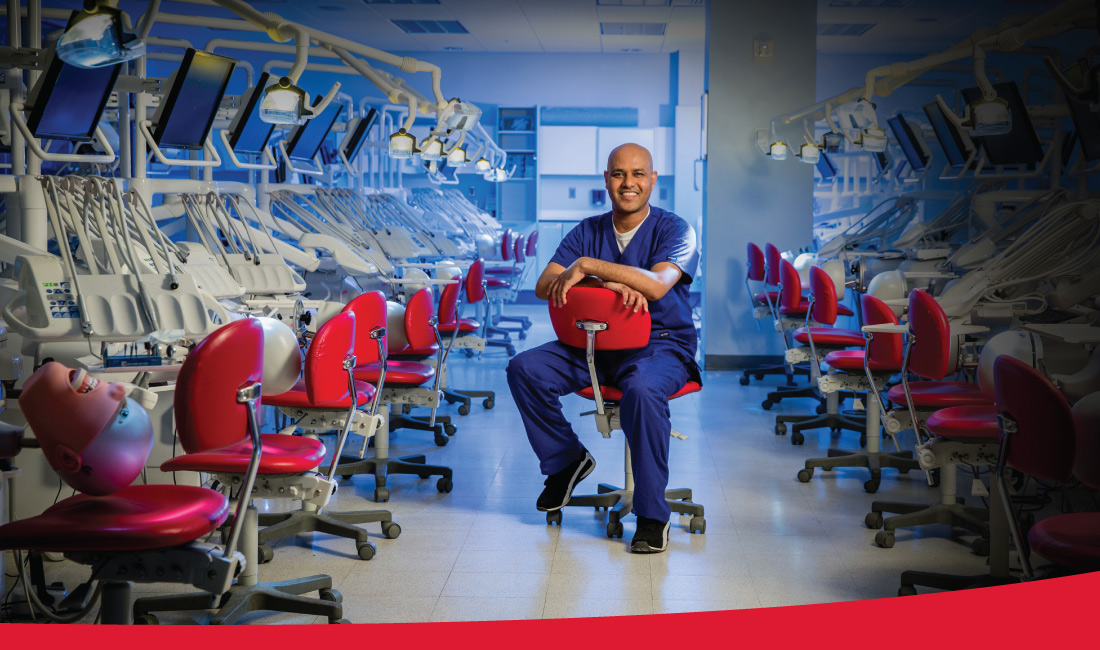 It was an unlikely path that led Derejew Tessema to the University of Maryland School of Dentistry.

Tessema, Class of 2016, began studying dentistry after a 13-year career as an architect in Ethiopia, South Africa, and the U.S., to which he immigrated in 2006.

He has come a long way from an impoverished childhood in Ethiopia, the youngest of 12 children born to a subsistence farmer. “My parents were not educated, but they did everything possible to send me to school. For me to be here today,” he says, “they had to send me to a different city when I was 16. It was costly and emotionally challenging for me and them equally.”

Now, a husband and father of five, including two adopted children, is eager to use his skills and accomplishments to improve the lives of others, not just here but in his native land.

“Dental care in Africa is literally absent,” says Tessema. “I remember in Ethiopia we had one dental hygiene training college for nurses. Annual graduation was around 30, and that was all to serve the 80 million population at the time. The need for dental care in Africa is huge, and I have a moral responsibility to help.” Tessema adds that he looks forward to taking part in worldwide missions when he gains more clinical experience.

Dentistry might seem a departure from his prior career, but Tessema says he sees parallels between his current studies and the field of architecture: Both fuse science with art to achieve functional and aesthetic results. And just as a building must demonstrate endurance under a variety of conditions, he says, “A dental restoration should exhibit structural stability that withstands the biomechanical pressures of the oral environment.”

“Derejew Tessema is a remarkable person who inspires me as a faculty member,” says Andrea Morgan, DDS, MS, an assistant professor at the dental school. “He is always thinking of ways that he can help others. He is my go-to person when I need an upperclassman to help a struggling student. He gives of himself freely and with an open heart and mind.

Tessema, who speaks four languages, says he sees education as the key to overcoming the world's problems. “We acquire knowledge that helps us solve the challenges of our social and physical environment,” he explains. Research and innovation are what move societies forward, he says, and that is what drives him to continue his education.

“His story, his struggle, his journey has not caused him to be angry or upset; rather, it has inspired him to be the best he can be,” says Morgan. “And when I see him in the dental school, he is the one who inspires me to be a better person.”