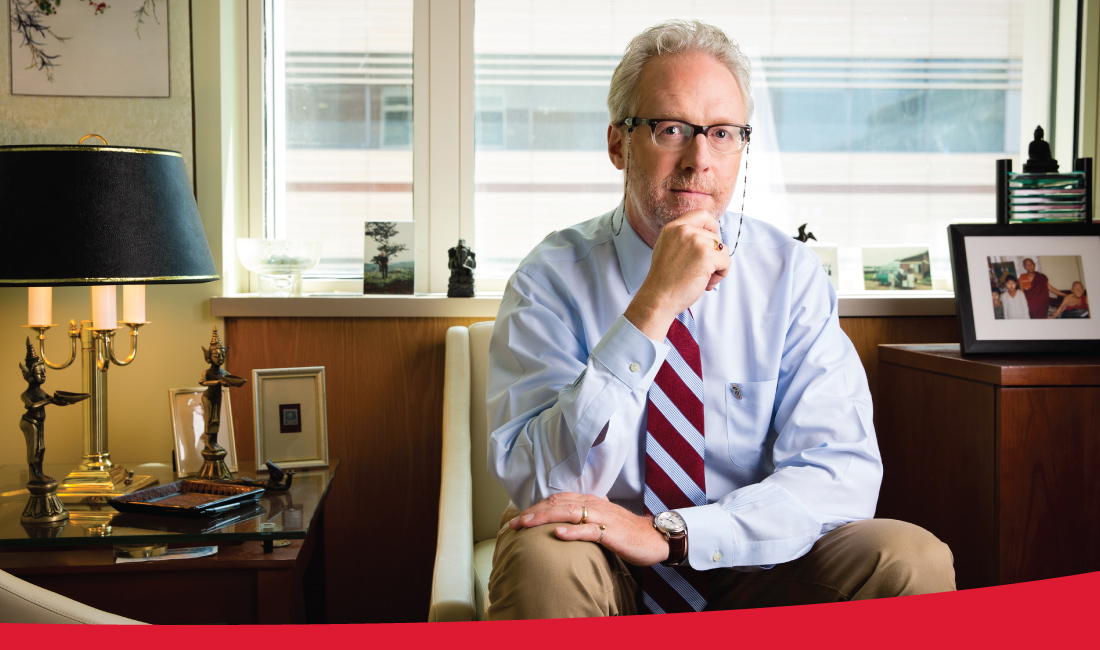 For Christopher Plowe, MD, MPH, the career choices couldn’t have been more different: The only job he thought could be as rewarding as a malariologist was a rock star.

“But those guys peak early,” says Plowe, a professor of medicine, epidemiology and public health, and molecular microbiology and immunology at the University of Maryland School of Medicine.

Fortunately for the world of public health, he chose malaria research.

Now, the Howard Hughes Medical Institute investigator and leader of the Malaria Group at the School of Medicine’s Center for Vaccine Development (CVD) thinks the field he helped pioneer could be three to five years away from finding a vaccine for the disease that each year kills more than 600,000 people.

Plowe studies the genetic evolution of the malaria parasite —transmitted through the bite of an infected mosquito — examining how it has adapted to human immune responses and drug treatments. His work informs the combination of drug therapies used to treat patients in different malaria-affected regions.

Plowe currently leads a team of scientists coordinated by the World Health Organization. They’re investigating alarming first-time incidences of malaria in Southeast Asia that are resistant to artemisinin, considered ― until now ― the anti-malarial wonder drug. Plowe’s team, working primarily in Myanmar, has identified several promising genetic markers that could be used to develop tests to identify and track the spread of artemisinin-resistant malaria.

Plowe’s already led several clinical trials with partners in Mali to test vaccines that could one day prevent malaria and eliminate the need for therapeutic drugs. (Africa is hit especially hard by the disease; an infected child there dies every single minute.)

He’s most excited about a whole parasite vaccine that uses weakened organisms to stimulate the body’s protective immune response. In initial clinical trials, the vaccine, developed by Sanaria, a biotechnology company founded by Plowe’s friend, Steven Hoffman, MD, DTMH, DSc, provided up to 100 percent protection against malaria when it was given to volunteers intravenously. Plowe plans field studies on the vaccine in West Africa next year.

It’s this groundbreaking work, heralded by the international scientific community, that has driven the CVD’s reputation in Southeast Asia and Africa as a global leader in the fight against malaria.

And yet this battle wasn’t always the obvious choice for Plowe, who, as a medical student, figured he would go into psychiatry or surgery.

But a lecture on public health piqued his interest in the “health of populations” and led to a summer gig in Indonesia with Hoffman, then a Navy scientist. Plowe later went to Kenya to study the immune system’s reaction to malaria infection under Hoffman.

The travel, and the realization that poverty and health are inherently connected, was life-changing for Plowe, a South Dakota native who, until then, had never been outside of North America.

“I had seen real poverty on the Indian reservations [where his father worked as a clergyman] but nothing on the scale of what I saw in Indonesia,” he says. “I traveled around the island of Bali on a motorcycle, and I came away impressed by how intractable a problem poverty is in these developing countries.”

To Plowe, malaria seemed the most biologically complex and fascinating of diseases. So he pursued that after completing his training and fellowships.

“Compared to the viruses and bacteria that most vaccines prevent, malaria parasites are big and complicated,” he says.

Plowe developed a way to quickly test drops of patients’ blood, dried on paper, for evidence of drug resistance in the parasite. Around the world, Plowe’s rapid molecular tests are used to understand the population genetics of malaria, control outbreaks of the disease, and inform treatment policy decisions. It’s an antimalarial strategy that provides immediate hope for millions of people around the world suffering from, or vulnerable to, the disease.

Over the years, Plowe has become the go-to expert on malaria for the media, from Dr. Oz to CNN, but his greatest satisfaction comes from seeing the young scientists he trains become leaders.

“He helps people see the big picture,” says Laufer, who first teamed up with Plowe as a fellow on an early HIV-malaria study in Malawi. Today, she runs her own lab.

When he’s not working with junior scientists and building the research capacity of malaria-infected countries, Plowe rides his vintage Harley-Davidson ― across the country when he can.

It is the wind in his face, the speed, and the sense of freedom that Plowe, a 54-year-old father of three grown children, likes.

It brings out the rock star in him.