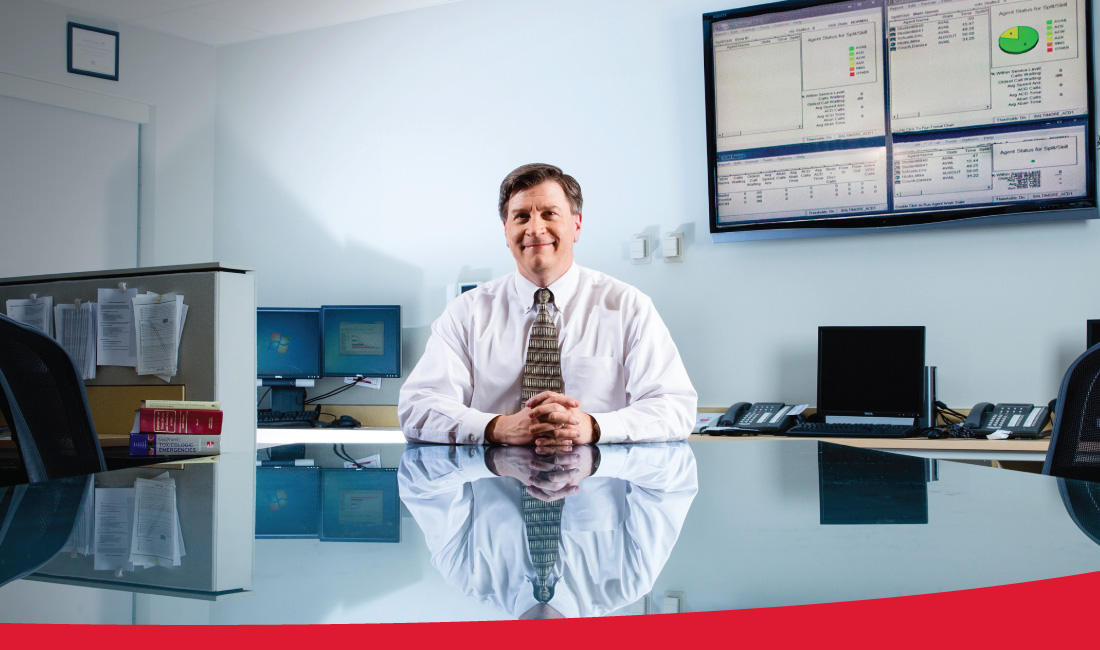 University of Maryland School of Pharmacy

Bruce Anderson, PharmD, DABAT, is a “fixer” of sorts, heading an organization thousands of Marylanders call each year when, as he puts it, “something bad happens.”

Anderson is director of the Maryland Poison Center at the University of Maryland School of Pharmacy. And in Anderson’s world, “something bad” comes in many forms: a toxic exposure in the workplace, an accidental poisoning at home, a bad drug interaction or overdose, a spider bite.

When the poison center moved into the School of Pharmacy 42 years ago, it served physicians only and logged about 5,600 calls a year. It’s since evolved into a free public service, available 24/7 to anyone who needs advice or assistance. The center now receives more than 55,000 calls each year. On average, that’s 155 calls every single day.

“We get calls about everything,” Anderson says. “Folks often tell us, ‘you’re never going to believe what just happened.’” Not only does Anderson believe it, he says the center has probably managed 1,000 cases just like it.

Of all the toxic exposures the Maryland Poison Center handles, about half involve children who get into common household items, like cleaning supplies, toiletries, or over-the-counter medications. Anderson says that’s the scenario most people think of when they think of a poison center’s caseload. But everyone is at risk for poisoning, he emphasizes. People call because they accidentally took a double dose of medication, or their child took a drug to get high, or they were exposed to pesticides while gardening, or a friend tried to harm himself by overdosing.

Over Anderson’s 20 years as director, the Maryland Poison Center has handled several public health threats: the tunnel fire underneath Baltimore City in 2001, the anthrax scare that same year, accelerating abuse of synthetic marijuana and “bath salts” since 2010. During big snowstorms―when snow accumulation blocks flues and vents, or power outages cause people to fire up generators―the center charts an uptick in carbon monoxide poisonings.

Through it all, Anderson remains composed and focused on the big picture. “Public services, such as the [Maryland Poison Center] continue to face increased economic pressure,” says School of Pharmacy Dean Natalie Eddington. “There is a need for innovators who understand those pressures and can use new technologies and scientific tools to achieve workable solutions. Dr. Anderson is known for his ability to drive innovation, helping the center expand both its staffing and services to document poisoning cases and review the data for possible outbreaks of bioterrorism, chemical terrorism, and other potential public health problems, such as food poisoning or contamination.”

Drug use is another public health problem Anderson monitors. The poison center adopted a sophisticated geographic mapping system to identify and aggregate the origin of drug-related calls coming in. But Anderson’s innovations aren’t all high-tech. When he noticed a spike in calls from people asking for help in identifying recreational drugs they had taken, he hired substance abuse counselors to work with the callers.

Anderson says that, given its long history, the Maryland Poison Center has helped define what a poison center should be. “We added health education and outreach to the mission of the poison center. There were no guidelines for that. No professional organization was saying ‘Thou shall or shall not.’ We just did it because it was the right thing to do.”

Anderson’s longtime colleague, Wendy Klein-Schwartz, PharmD, the poison center’s coordinator of research and education, says Anderson “has a clear vision of where he wants the center to be and has moved it in that direction.”

The poison center’s work saves money as well as lives. About 70 percent of its cases are resolved on the phone, preventing costly trips to already burdened emergency rooms. Unless the patient is in serious distress―not breathing, seizing, bleeding profusely―Anderson recommends a call to the experts at the poison center. That way, callers can start taking steps immediately to counteract the effects of the poisoning. The staff’s expertise offers another compelling reason to call. After all, he says, “Who do you think 911 calls when they have a poisoning case?”

Answering the calls are pharmacists and nurses. They’re dedicated full-time to the Maryland Poison Center, and they all have additional toxicology training and certification. These specialists are supported by a medical director who is board-certified in emergency medicine and medical toxicology, as well as outside consultants who are contacted for circumstances so unusual they stump even the experts. A host of students rotate through the center―UMB pharmacy students, emergency medicine residents and fellows at the Johns Hopkins Hospital, EMT students at the Community College of Baltimore County, and pediatric residents from several area programs. Then there’s Anderson himself, a board-certified toxicologist and faculty member in the School of Pharmacy’s Department of Pharmacy Practice and Science. For his 24/7 public service, Anderson received a 2014 University System of Maryland Faculty Regents award.

Perhaps this line of work isn’t surprising for the son of two chemists, a kid who worked part-time in a pharmacy across the street from his house. He started out cleaning shelves and driving the delivery truck. But the pharmacist who ran the business soon realized he was wasting Anderson’s potential. “I asked enough questions that he soon had me working behind the counter,” he recalls.

The rest, as they say, is history. Life-saving history.