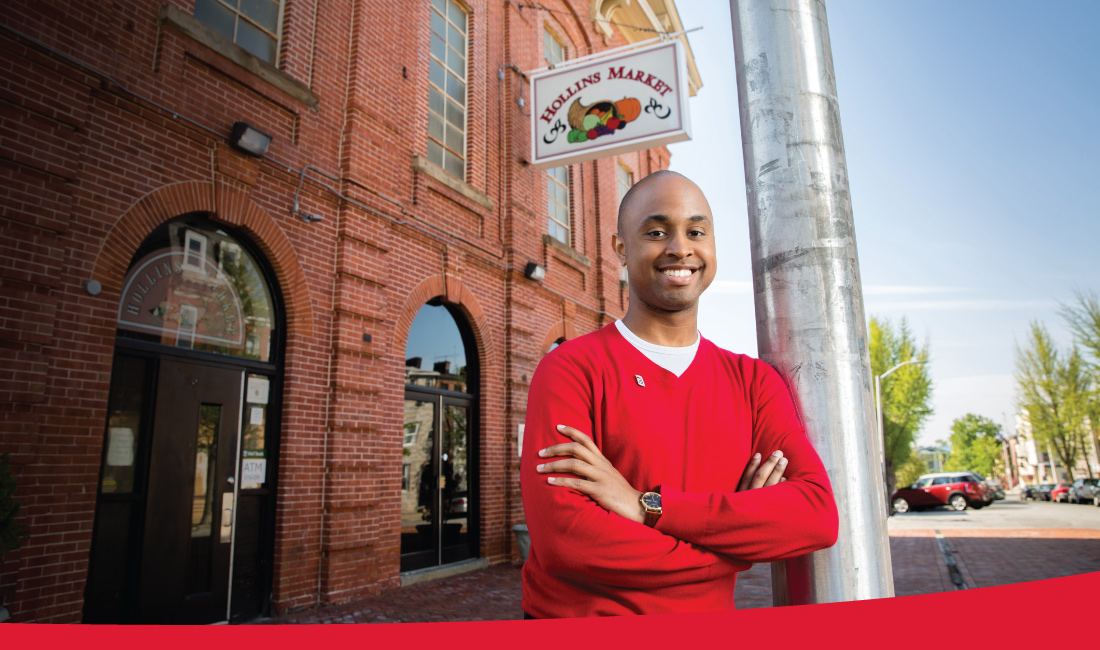 When Bill Joyner walks into CUPs coffeehouse in the Hollins Market area of West Baltimore, everyone knows his name. It’s not so much that he’s a regular there―although the baristas know he usually orders a caramel macchiato―it’s because he has a lot to do with the coffeehouse’s ongoing success.

Last year, Joyner, then a master’s candidate at the University of Maryland School of Social Work, helped organize a fundraiser for CUPs (“Creating Unlimited Possibilities”), which employs at-risk young adults, providing them important skills that can be applied to future careers. The fundraiser, a brunch held at the University of Maryland, Baltimore (UMB), attracted more than 160 people and netted almost $7,000 in much-needed operating funds for the nonprofit.

“CUPs is important because it helps change the narrative of people―particularly young black males―who have typically been looked at as threats to safety or a drain on the community,” says Joyner, who lives in a rowhouse a block from the coffeehouse. “When you come to CUPs, you see them being productive, happy, valuable citizens, and that helps shift the identity of a group that has been disconnected in so many ways.”

Though only 26, Joyner has been honing his community-organizing and advocacy skills over many years. As an undergraduate at the University of Maryland, Baltimore County, he co-founded an organization promoting LGBT rights. At UMB, he co-founded the Community Action Network (CAN), an organization allowing social work students to apply skills and principles learned in the classroom to empower Baltimore communities. CAN sponsored the CUPs fundraiser and also produced an online map of businesses, volunteer opportunities, and points of interest in West Baltimore, helping drive badly needed foot traffic to the Hollins Market area.

“Bill’s passion, vision, and commitment to the community aren’t only inspirational, they’re infectious,” says Holly Gray, owner of CUPs. “Bill is determined to make our local communities into places where businesses and residents can thrive.”

Joyner’s gotten a new chance to do just that. He recently joined UMB’s Office of Community Engagement, where he helps coordinate, focus, and strengthen the hundreds of local outreach programs led by UMB faculty, staff, and students. “I knew immediately that Bill had both the professional training and the personal drive to make a big impact on our engagement work in West Baltimore,” says Ashley Valis, MSW, executive director of community initiatives and engagement at UMB. “He’s already well-respected in this community, and he’s as dedicated as anyone I know to making it stronger.”

One of Joyner’s responsibilities is to identify local procurement opportunities for UMB. It’s part of the University’s work with the Baltimore Integration Partnership, an alliance that fosters economic inclusion through local hiring, purchasing, and community reinvestment.

The work aligns perfectly with Joyner’s long-held goal: to help communities help themselves through social enterprise. “When I came to the School of Social Work, I wanted to study social issues on a macro level, to use economics to improve entire communities,” he says. “One of the biggest conditions that leads to community-level disinvestment or social problems is a lack of economic power. Social enterprise is a way of using the economy as a tool for social justice. It can help individuals, communities, and even regions to build economic power.”

“Bill is tireless,” says Lane Victorson, MSW, an adjunct faculty member in the School of Social Work and Joyner’s field advisor for internships he completed through the school’s Social Work Community Outreach Service. “He takes on a lot of different work but still comes through. He has used his imagination in believing in the potential of the Hollins Market area, which is always refreshing to see in students. While the neighborhood faces considerable challenges, Bill continues to identify the opportunities there.”

Joyner credits his grandmother, in part, with instilling in him a sense of social justice. “Where she lives, the church is the ultimate community organization,” he says. “Whenever you need help for anything, you go there. Her being a leader there showed me the impact it could have on people’s lives, real people. That’s where I saw value in her work. Nobody in my family is rich, but she got her wealth from the impact she has on people’s lives―impact she’s achieved through social action. I hope to do the same.”