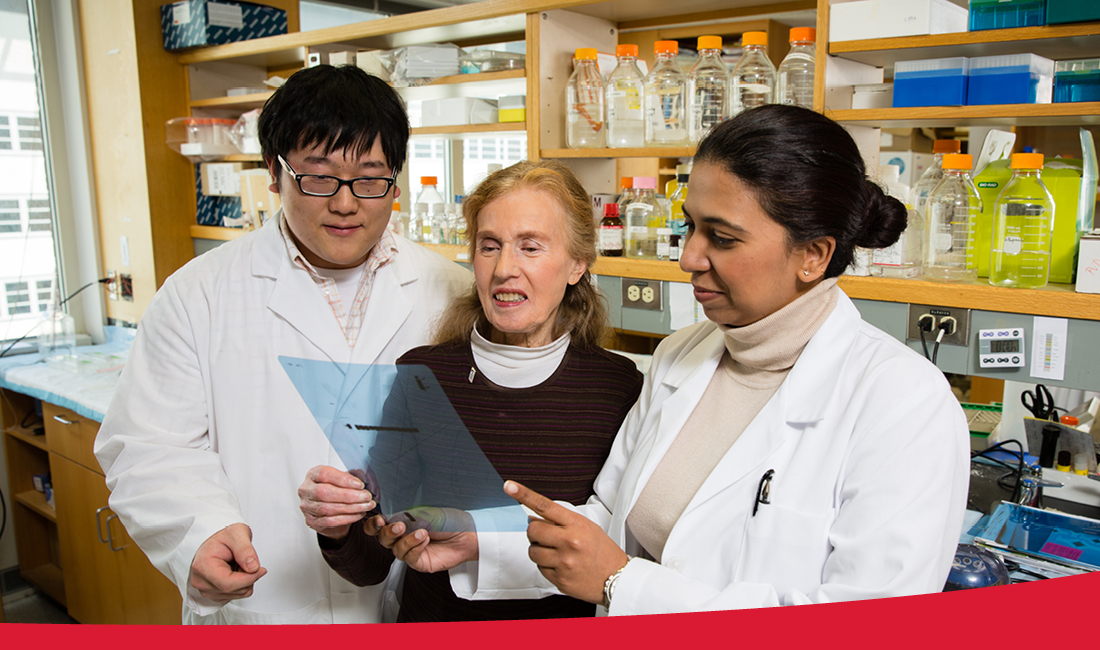 Angela Brodie is a fourth-generation scientist. But to say she’s gone into the family business is a bit of an understatement: Brodie, PhD, professor of pharmacology at the University of Maryland School of Medicine (SOM), is one of the world’s most decorated scientists in cancer research. Her pioneering work over 40 years has saved the lives of thousands of women worldwide.

Early in her career, Brodie won a National Institutes of Health (NIH)-sponsored fellowship to the Worcester (Mass.) Foundation for Experimental Biology. It was at the foundation that she met her husband; together, they began developing inhibitors to block estrogen synthesis. Brodie was confident this could be the link leading to non-surgical breast cancer treatment. The proposal she submitted to NIH hypothesizing as much was funded by the agency in 1975. Four years later, she relocated her laboratory to the SOM.

Her research over the next 20 years laid the groundwork for a class of drugs called aromatase inhibitors, which help prevent recurrence of breast cancer in postmenopausal women by reducing estrogen produced by the body, thereby starving the hormone-dependent cancer cells.

Prior to her discovery, the primary non-surgical breast cancer treatment was tamoxifen, a drug that, despite its effectiveness, can lead to stroke and endometrial cancer. Today, aromatase inhibitors, which are effective without incurring serious complications, have supplanted tamoxifen as the go-to defense against breast cancer, diagnosed in nearly a quarter-million American women each year. “The development of this class of drugs is arguably one of the most important therapeutic advances in treating women with breast cancer in the last quarter century,” says Kevin Cullen, MD, director of the University of Maryland Marlene and Stewart Greenebaum Cancer Center.

Brodie has been funded by the NIH for four decades, and is the first woman to be awarded the prestigious Kettering Prize from the General Motors Cancer Research Foundation. Among many additional awards, she’s won the Susan G. Komen Breast Cancer Foundation’s International Brinker Award, the Landon Award from the American Association of Cancer Research, and the Pharmacia Award of the American Society for Experimental Therapy. In 2013, she was in the first class of fellows inducted into the American Association for Cancer Research Academy, established to honor scientists whose major scientific contributions have catalyzed significant progress against cancer.

Following her breakthrough in breast cancer research, Brodie began developing inhibitors against prostate cancer, which had claimed her father. She believed the mechanisms leading aromatase inhibitors to suppress the disease in the breast might apply equally well to cancer of the prostate.

Brodie collaborated with the SOM’s Vincent Njar, PhD, and together they developed a promising compound, VN/124. The compound is the basis for galeterone, an androgen-blocking drug Brodie and Njar have exclusively licensed to Tokai Pharmaceuticals. Results of Phase 2 clinical trials, recently concluded, are extremely encouraging: Trial subjects’ prostate-specific androgen (PSA) levels, often elevated in men with prostate cancer, are significantly reduced, and galeterone’s approval has been fast-tracked by the Food and Drug Administration.

Brodie’s great-grandfather, grandfather, and father were all accomplished scientists before her. And while it’s tempting to say that she’s followed in their footsteps, it’s clear the path she’s paved is all her own.