State of the University

Future Hopes of UMB Laid Out in State of University Address 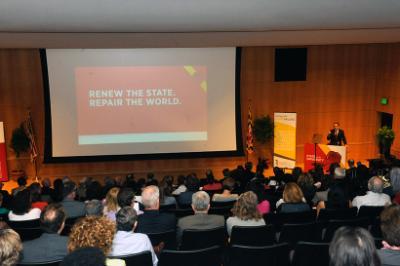 There is nothing like the sight of children to inspire hope, so it was only fitting that University of Maryland, Baltimore (UMB) President Jay A. Perman, MD, began his second annual State of the University Address on May 7 with a performance by the sixth-grade dancers from Southwest Baltimore Charter School.

But there was deeper meaning as well to their presence at his optimistic address “Renew the State. Repair the World” before a big crowd at the School of Nursing.

The charter school is one of UMB’s neighbors, part of the neighborhood affected by unrest in recent weeks that UMB reached out to in various ways.

“Two miles north of Southwest Baltimore Charter School are the Gilmor Homes in Sandtown-Winchester, where Freddie Gray was arrested on April 12,” Perman said. “Seventy-five minutes later, he arrived at Shock Trauma — where he would later die. Many of you joined peaceful protests, seeking answers and justice. Many of you provided help and care to those suffering after peaceful protests turned violent. And many joined our neighbors in celebrating the solidarity of One Baltimore, a city united in hope and healing — in a vision of a future that’s better than our past.

“We are rooted in this community. We are inextricably bound to our Baltimore neighbors. … The title of my address was serendipitously chosen the day after Mr. Gray’s arrest, when no one knew he would become such a powerful catalyst for anger, for action, and, we hope, ultimately for change. But now the title is especially apt.”

In a wide-ranging, 45-minute address, Perman, UMB’s president since 2010, spoke about the University's vision for strengthening our communities, building population health and prosperity, and engaging in scholarship and service that change lives for the better.

He noted that UMB, which has schools of dentistry, law, medicine, nursing, pharmacy, social work and a Graduate School, confers 53 percent of the professional practice doctoral degrees awarded in Maryland. “I’d like to get that share to 60 percent,” he said, “not because we want other universities to do less — but because we want to do more.”

The University has expanded its offerings with joint programs at the Universities at Shady Grove in Rockville, Anne Arundel Community College, the College of Southern Maryland, and Montgomery College, to name a few, but Perman wants more.

“We must think broadly about how and where our programs are delivered, leveraging partners and technology to meet students where they are so that they’re more inclined to serve in their same underserved communities.”

“If we’re going after the best and brightest students — as we always have — and if we’re seeking out students where we seldom looked before — as we must — we have to have a comprehensive plan around student aid.”

He said among his most important efforts is building a “culture of giving” at UMB. “We must persuade our alumni and friends, our partnering foundations, that we’re a good bet — that an investment in UMB and in our students is an investment in the vitality of this state and this nation.”

Perman congratulated the School of Nursing on its recent $5.2 million gift from William and Joanne Conway — the largest in the school’s 126-year history — which will fully fund 157 new nursing students.

Turning to interprofessional education (IPE), Perman lauded the work of the University’s Center for IPE, which was launched in 2013. “But we need a physical home for our center, where students can learn and practice in big groups and small teams. I’m thrilled to announce that Whiting-Turner has given us $3 million toward establishing such a home.”

A proposal for a pilot program to evaluate an interprofessional care model in Prince George’s County and Southern Maryland has been submitted to the Department of Health and Mental Hygiene. A second proposal has grown out of UMB’s structured MPowering the State collaboration with the University of Maryland, College Park. It calls for an institute, run by both research powerhouses, to evaluate health care quality and costs in Prince George’s County and Southern Maryland and assess whether an interprofessional model contributes to better, more affordable care.

“You can’t get a job — you can’t keep a job — when you’re unhealthy or when you’re caring for someone who is. And so the graduates we put into our communities do more than cut the crippling costs associated with preventable disease. They actually promote workforce productivity and fiscal strength.

“The AMA estimates that every physician working in Maryland today supports nearly 10 additional jobs and generates $1.6 million a year in sales revenue. Our graduates constitute our single biggest contribution to the state’s economy.”

He also spoke about renovating UMB-owned buildings around Lexington Market into a “vital, energetic corridor” and his hopes for the University of Maryland BioPark expansion to galvanize area growth.

“873 W. Baltimore St. — the BioPark’s third commercial lab and office building — will be the heart of our innovation district,” Perman said. When the building’s tenant space of 250,000 square feet is filled, the BioPark will become one of the largest innovation centers in the state. UMB is working closely with the city and the state and hopes to start construction by the end of this year.

Perman mentioned that the Goldseker Foundation and Abell Foundation have been critical investors in West Baltimore’s development and growth.

Repairing the world also means saving lives. Perman lauded researchers whose discoveries are improving life for those with prostate cancer, chronic pain — even infants with congenital heart disease. Vaccines are being developed to fight crises worldwide.

Improving the human condition, part of UMB’s mission statement, also includes social health, with the Carey School of Law and the School of Social Work teaming up to tackle long-standing issues of social justice in homes, communities, schools, and prisons. UMB’s faculty also is confronting cyber harassment and abuse.

“This is you repairing the world,” Perman told the crowd. 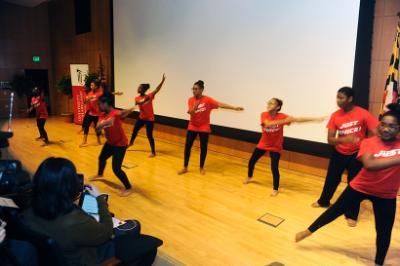 Many of those values are part of the newly formed Office of Community Engagement, which is coordinating UMB’s many outreach efforts, Perman said.

“Localized engagement isn’t something we’re doing in isolation,” he said. “The Baltimore Integration Partnership, for instance, is a group of nine Baltimore anchor institutions — universities and hospitals — sharing resources and expertise so that it takes less work to do more good for more people.”

Pipeline programs such as UMB CURE Scholars are aimed at getting talented, curious students from West Baltimore into health care and research careers.

“It’s critically important that we get students of color and students in poverty into biomedicine — not only because access to good-paying jobs lifts up families and transforms neighborhoods — but because cancer and other chronic diseases devastate communities like West Baltimore,” Perman said.

The first class of about two-dozen middle school students is being enrolled in UMB CURE this fall. A job skills training program, work with the seven neighborhoods of the Southwest Partnership, as well as a community-based collaborative to help residents start businesses are other initiatives Perman mentioned.

Of the last initiative, Perman said, “It’s a great opportunity for local entrepreneurs to tap into our purchasing power and keep our dollars in their neighborhoods.”

Perman also spoke of establishing an urban extension center in West Baltimore, within walking distance from UMB. “The point is to have a physical presence dedicated to community engagement in the neighborhoods that mean so much to us.”

In the end, the president expressed pride in UMB and its people. “When our excellence shows, people notice. And they want to be with us, on the front lines — dismantling structural poverty and inequity;  applying their scholarship and their service to solving the most challenging problems we confront as a society; making Maryland and the world more just, more enlightened, healthier, and more humane.

“Thank you all for your extraordinary work this year.”