Growing up in a farming community in Caroline County on Maryland’s Eastern Shore, Bruce E. Jarrell, MD, FACS, learned lessons from his parents on relationships and reinvention that still guide him today in his new role as president of the University of Maryland, Baltimore (UMB).

“My father ran a farm and a small canning factory, and the most important thing I learned from him is that trusted relationships matter, that it’s important to be true to your word and make sure that you deal with every individual as a special person,” Jarrell said during his “Meet the President” virtual town hall Sept. 22. “My mother was a schoolteacher, and after she retired she reinvented herself into being an embroiderer and was taking classes up to the age of 101. I learned from her what it means to continually improve yourself and to be a better person.” 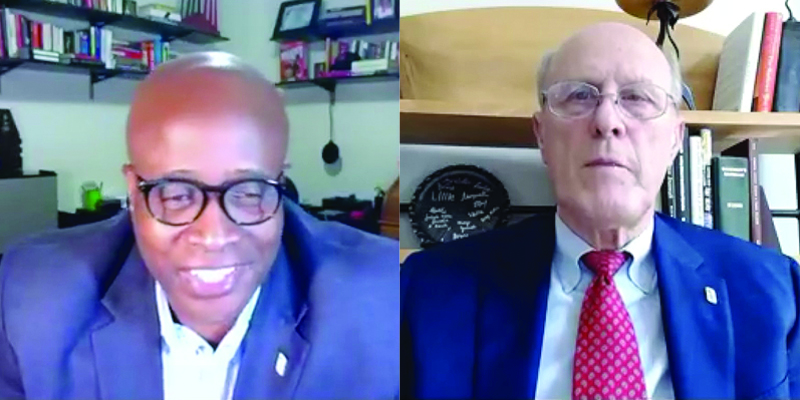 In the town hall, Jarrell first spoke about how his upbringing, education, and professional pursuits molded him into the leader who has guided the University through the challenges brought on by the COVID-19 pandemic. He praised the UMB community for its resilience and innovation during this unprecedented health and economic crisis, then described having three main priorities as president, with the first relating to his mother’s theme of reinvention.

“Due to COVID-19, we have to reimagine and reposition how we telework; how we teach students didactically and in experiential, clinical, and client-related relationships; and how we do telehealth,” said Jarrell, who was UMB’s interim president from Jan. 6 to Sept. 10, when the University System of Maryland Board of Regents selected him as president. “This pandemic also has really underscored the importance of basic and applied research. And it’s fair to say that that will continue to be a high priority at this institution.

“And while we focus on this reinvention, we’ve got to involve all of our seven fine schools, so that everybody can benefit. And, of course, we’ve got to keep our budget under control. So, what’s my highest priority? It will be how we reimagine and reposition UMB as a premier  institution in all of our missions.”

Jarrell’s second priority, relating to his father’s lessons on how to treat people with dignity, is to create a more inclusive culture at UMB, one where under-represented minorities, women, and members of other marginalized groups have the opportunities and resources to develop the potential to succeed in life.

To that end, he said the process is moving forward to hire a chief diversity, equity, and inclusion officer (CDEIO) and have that person on board in early 2021. He said the CDEIO will report to him, have significant resources and authority to effect change, and interact with the schools’ diversity and inclusion officers as well as UMB’s Diversity Advisory Council and President’s Council for Women.

“Another step will be a broad educational effort to gain a better understanding of institutional and structural racism and how it affects members of under-represented or marginalized groups,” Jarrell said. “I expect that this process will lead us to many thoughtful actions we’ll need to take to change this culture. And I expect us — and myself — to be held accountable for these changes.”

The third priority involves UMB’s role as an anchor institution not only in the city but around the state, and again Jarrell’s Eastern Shore roots provided him with perspective. He discussed maintaining UMB’s commitment to its West Baltimore neighbors, noting the recently completed renovation of the new Community Engagement Center. But he also described a 2019 visit to mid- and lower-Eastern Shore counties and learning firsthand about the area’s high disease burden, poor health statistics, and lack of access to health care.

“Those are suffering communities, too, and we’re a state institution, so we have an obligation to deal with those underserved individuals,” Jarrell said. “And this includes other areas of the state. I know Western Maryland has its share of difficulty, as does Prince George’s County. I don’t want to leave anybody out. We have an obligation to pay attention to all of Maryland.”

Jarrell also fielded a number of questions from the audience regarding issues such as telework, online teaching, economic development, and community engagement, as well as a lighter inquiry about the status of the police department’s comfort K-9 dogs. (For the record, Archie has “retired” and moved to Illinois with former police chief Alice Cary, but Lexi is on campus and available for visits.)

And there was one final question: Does Jarrell, an accomplished metalsmith and member of the Blacksmith Guild of Central Maryland, still have time for his favorite hobby? Of course he does.

“Work-life balance is exceedingly important for all of us,” he said. “For me to be creative at work, it’s necessary to have creativity out in my workshop, so I urge all of you to force yourselves to make time for those type of activities.”

Watch an excerpt of the program at the link above.