The University of Maryland, Baltimore (UMB) has received $2.3 million in awards to fund four research professorships through the Maryland E-Nnovation Initiative Fund (MEIF). 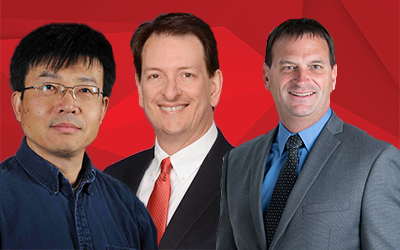 The Maryland Department of Commerce announced the awards Oct. 20. MEIF is a state program created to spur basic and applied research in scientific and technical fields at Maryland colleges and universities.

“I am deeply grateful for the support toward these four endowed professorships,” UMB President Bruce E. Jarrell, MD, FACS, said. “Attracting and retaining the most creative and innovative research minds is a powerful investment in scientific advancement and economic development in Maryland. At the same time, our academic environment at the University of Maryland, Baltimore will be enriched by the groundbreaking discoveries they will achieve.”

The funding can be used to pay salaries of newly endowed department chairs, staff, and support personnel in designated scientific and technical fields of study; fund related research fellowships for graduate and undergraduate students; and purchase lab equipment and other basic infrastructure and materials.

UMB raised private funds for each chair with the Department of Commerce approving matching grants to support the endowments.

Lishan Su, PhD, has been named the Charles Gordon Smith Endowed Professor for HIV Research, and he will lead basic and applied research in HIV/AIDS and other virally linked diseases as well as vaccine development. Su has been recruited by the Institute of Human Virology (IHV) at the University of Maryland School of Medicine (UMSOM) to become its director of the Division of Virology, Pathogenesis, and Cancer (VPC). He has an appointment in UMSOM’s Department of Pharmacology.

Peter B. Crino, MD, PhD, who chairs the Department of Neurology at UMSOM, was awarded the Dr. Richard and Kathryn Taylor Professorship in Neurology. Crino was actively being recruited by numerous academic medical institutions, and the endowed professorship will allow the medical school to retain him. This will give Crino dedicated time to foster innovation and discovery in the field of translational neurosciences with a focus on new applications toward clinical use and potential commercialization to bring new intellectual capital to the state of Maryland.

“This is tremendous news for UMSOM and for UMB,” said E. Albert Reece, MD, PhD, MBA, dean and John Z. and Akiko K. Bowers Distinguished Professor, UMSOM, and executive vice president for medical affairs, UMB. “The E-Nnovation Fund has played such a valuable role in helping us attract and endow some of the leading physicians and scientists in the nation.

“We are grateful to the MEIF and the Maryland Department of Commerce for helping to provide these outstanding faculty members in neuroscience and infectious disease with the critical resources they need to sustain and expand their research and discovery well into the future.”

The Richard P. Barth Professorship in Children’s Services Research at the University of Maryland School of Social Work (UMSSW) will work to accelerate the development of new treatments for clients within and beyond the state of Maryland; provide mentorship of the school’s graduate students, postdocs, trainees, and faculty; and increase the commercialization and establishment of new interventions, clinical technologies and services.

The school’s goal is for the future Barth Professor to bring additional resources and grants to Maryland to build programs for children that offset the state’s costs of remedial and corrective education, health, and justice services.

The professorship is named after Richard P. Barth, PhD, MSW, professor and chair of the Executive Committee of the Grand Challenges for Social Work, and former UMSSW dean who stepped down this summer after 14 years at the helm.

“At this critical moment in our nation’s history, recruiting a Barth Professor will enable UMSSW to propel children’s services research and programs to new heights, building on former Dean Richard Barth’s legacy of creativity and innovation,” said UMSSW Dean Judy Postmus, PhD, MSW. “By funding this prestigious Barth Professorship, UMSSW and the state of Maryland will recruit a leader in the field of child well-being services — services that are fundamental to building a better and just society.”

The Dr. Paul & Mrs. Jean Corcoran Endowed Professorship at the University of Maryland School of Dentistry (UMSOD) will support the work of Robert K. Ernst, PhD, professor and vice chair of UMSOD’s Department of Microbial Pathogenesis and the UMB Researcher of the Year in 2017 and Entrepreneur of the Year in 2019.

Ernst’s work focuses on the interplay between a bacterial pathogen and the host defense mechanism. His research has led to the development of a diagnostic test to more rapidly identify bacteria- and fungi-caused infections. He also is co-founder of a company, Pataigin, aimed at developing a method to quickly identify disease-producing agents. The professorship also will support Ernst in furthering the development of novel adjuvants using patented technologies with a goal of producing new ways of preventing and treating disease.

“I am deeply appreciative of the role that the MEIF and the Maryland Department of Commerce has played in helping to create the Paul and Jean Corcoran Endowed Professorship, which will support one of our outstanding faculty members whose pioneering research with novel diagnostics and therapies is translating into significant federal grant support, unique educational opportunities, and new startup businesses within Maryland,” said Mark A. Reynolds, DDS, PhD, MA, dean and professor at UMSOD.

The Maryland E-Nnovation Initiative was created by the General Assembly during the 2014 legislative session and has provided more than $49.3 million in funding to leverage more than $59.6 million in private donations.