After detailing the many ways in which the University of Maryland, Baltimore (UMB) improves the human condition and serves the public good, Bruce E. Jarrell, MD, FACS, spoke during his inauguration Nov. 5 about how UMB would meet the challenges of the future. With his six grandchildren sitting beside him as he concluded his speech, the forward-looking message hit home. 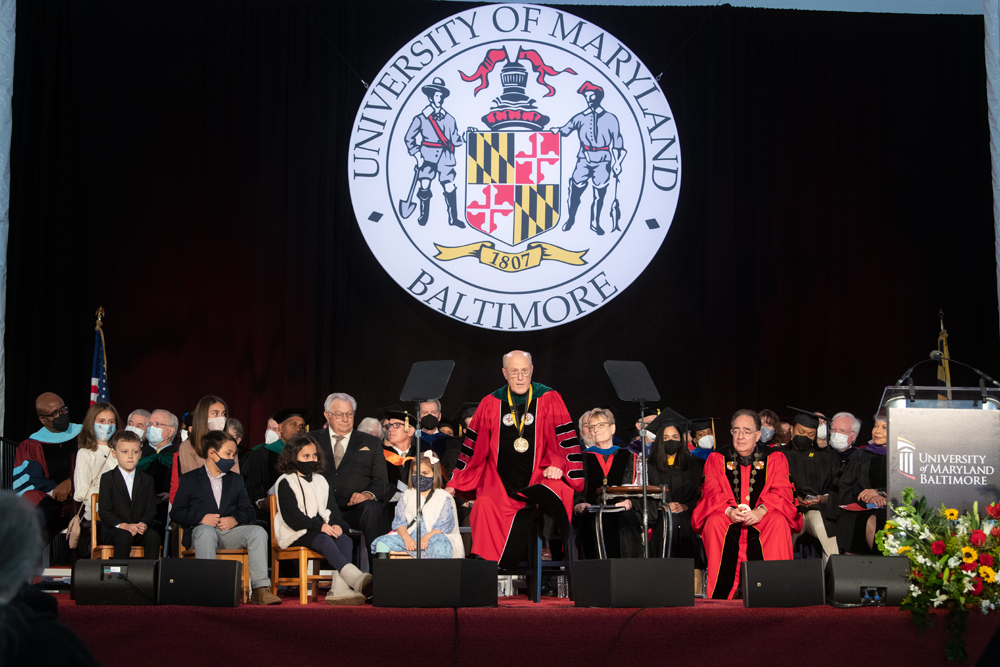 “Programs at UMB have made a big impact on our world today, and that will continue in the future. We’ve done a lot, but there’s always more that we can do.”

With that, Jarrell announced that his lifelong friend, Lawrence Hayman, chairman of H&M Bay, Inc., a logistics and storage company based on the Eastern Shore, where they both grew up, had stepped up to brighten those futures with a pledge of nearly $18 million to create two endowments at UMB. The first fund will provide scholarships to Eastern Shore students who want to study at UMB while also supporting incentives to attract health care providers to practice in Caroline, Talbot, Dorchester, Kent, and Queen Anne’s counties. The second endowment will allow the UMB president to allocate funds to support research seeking the cure or advanced treatment of cancer.

“Commitment to Maryland,” in fact, was the theme of Jarrell’s inauguration, which came 14 months after the University System of Maryland (USM) Board of Regents selected him as UMB’s seventh president, succeeding Jay A. Perman, MD. Before that, Jarrell served eight months as interim president, beginning the role two months before the COVID-19 pandemic unfolded and turned the world upside down.

The inauguration was held in a covered outdoor setting in front of UMB’s Saratoga Building, which houses the President’s Office, and featured representatives from other Maryland colleges, local government, and private industry. Yumi Hogan, first lady of Maryland, and James D. Fielder Jr., PhD, Maryland Secretary of Higher Education, were in attendance, with Fielder reading a proclamation from Gov. Larry Hogan commemorating the occasion.

Joann Boughman, PhD, senior vice chancellor for academic and student affairs, USM, served as emcee, saying she was grateful that the crowd could gather safely during “this unprecedented time of COVID-19.” The pandemic, as well as Jarrell’s leadership and UMB’s response to it, also were themes that weaved their way through much of the two-hour, 10-minute ceremony.

Jarrell spoke glowingly of the School of Medicine’s (UMSOM) Center for Vaccine Development and Global Health (CVD), its research on COVID-19 vaccines, and its leaders’ contributions to the fight against the pandemic. His ties to UMSOM are deep, having come to Baltimore first as chair of the school’s Department of Surgery in 1997 before being named vice dean of the medical school and then holding a series of UMB leadership roles, including chief academic and research officer, provost, executive vice president, and dean of the Graduate School.

Mohan Suntha, MD, MBA, president and CEO of the University of Maryland Medical System, thanked Jarrell for leading with “grace and humility” as the two institutions teamed up to respond to the crisis. Linda R. Gooden, MBA, chair of the USM Board of Regents, praised Jarrell for bringing out the best in his colleagues during the pandemic and facing the challenge head-on. And Perman, now the USM chancellor, who described his successor as “a trusted colleague and a dear friend,” added that perhaps it was serendipity that Jarrell was elevated to the presidency during such a perilous time.

“His leadership throughout this pandemic — and UMB’s leadership — has pulled us through one of the most difficult times in our history,” Perman said. “The research emerging from UMB and the clinical care you’ve provided have changed the arc of this disease. Your contributions to our body of knowledge have saved millions of lives around the world. And I promise that your collective leadership — your hard, hard work — will not be forgotten.”

‘The Magic of UMB’

Officially installing Jarrell as president, Gooden presented him with the University medallion, saying it “represents UMB’s traditions. Wearing it signifies your commitment to this institution. And its weight serves as a reminder of the heavy responsibilities you must carry.” Perman then read his charge of office, instructing Jarrell to “advance the work of this extraordinary University.”

After the investiture, Jarrell took a seat at the center of the stage and talked about the impact of UMB’s professional schools and programs. He praised the work done by UMSOM’s CVD as well as the school’s Institute for Genome Sciences, Institute of Human Virology, and R Adams Cowley Shock Trauma Center. He discussed the School of Nursing’s Conway Scholarships, which provide financial aid to nursing students. He talked about the Francis King Carey School of Law’s Environmental Law Program and how its initiatives have had an effect on curbing air and water pollution.

At the School of Pharmacy, Jarrell noted, the PATIENTS Program gives members of the community a voice in how research is conducted and helps build trust between UMB and its neighbors. He touted the School of Social Work’s (UMSSW) partnership with the B’more for Healthy Babies initiative, which has resulted in a dramatic decrease in infant mortality in Upton/Druid Heights. And he commended the School of Dentistry for its annual Mission of Mercy events that provide free dental services to underserved populations in Baltimore City.

“When I look at UMB today, I see an environment that encourages innovation and

creativity,” Jarrell said. “I’m surrounded by creative people who are committed to improving the health and well-being of the people around us, of the community around us. That is the magic of UMB.”

‘We Are Up to the Challenge’

And, in another nod to UMB’s pandemic response, the University mace was carried by Ida Powell, custodial lead, Environmental Services, who is among the many front-line employees whose job has required them to stay on campus during the pandemic.

“Ida has worked at UMB for 26 years, and she exemplifies our core values,” Jarrell said. “She and her colleagues have been here every day since COVID hit, and that is true for many UMB staff — from Facilities, Environmental Services, the UMB Police Department, as well as doctors, nurses, and other health care professionals. We could not have met our mission without Ida and all of her colleagues.”

Jarrell wrapped up his speech by detailing his commitments as president, which he announced in a letter to the community that was released shortly after the event and included pledges to work for equity and justice, promote innovation and discovery, collaborate with partners around the state, and endeavor to attract the best students, faculty, and staff.

He closed by saying that when new hurdles are placed in UMB’s way, the University will be well-prepared to clear them.

“When the next challenge comes along — the next COVID, the next threat to our children — UMB and all within it will step up to serve our fellow Marylanders,” Jarrell said. “The impact will be far-reaching. And we are up to the challenge. Bring it on! That is my vision for UMB, and it will make Maryland a much better place to live.

To watch the entire inauguration program, access this link.